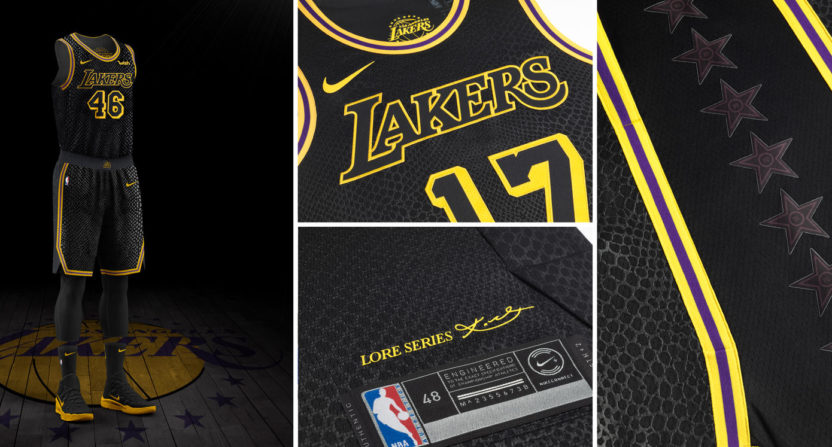 When Nike got their hands on the uniform contract from the NBA, you just knew they were going to start coming up with some creative designs that somehow fall under some generic marketing theme for the sake of having something different. Ladies and gentlemen, behold the Nike NBA City Edition Uniforms.

Nike just officially unveiled its "City" Edition uniforms for all 30 NBA teams. Here they are, starting with Atlanta, Boston, Brooklyn and Charlotte: pic.twitter.com/nJnztlisuC

Designed to pay tribute to signature elements of each of the NBA’s 30 franchises, the City Edition uniforms are being marketed by Nike as a way to honor the fans who come out to watch the home games of the various NBA franchises all season long. So you should totally be interested in these and go out and buy them in addition to your brand new home and away uniforms from Nike, as well as those third alternate uniforms teams already have in their uniform lineup.

But don’t kid yourself. Nike is a master of marketing fluff, and the NBA City Series rollout is Nike doing what it does best.

Take the Lakers’ City Series uniform, for example. Nike says the Lore Series uniform is inspired by former Laker Kobe Bryant with a Black Mamba print and Bryant’s No. 24 on the belt buckle. This isn’t a tribute to the fans at all. It is an homage to Bryant, who just had two uniform numbers retired by the Lakers.

But this one does come complete with a parquet floor design to honor the signature floors of the old Boston Garden. Nike calls gray “the color of unity,” which is a bunch of hogwash. As Nike puts it, gray was used to represent “the large regional fan base spread across New England that rallies behind the Celtics.” Give me a freaking break.

Each NBA franchise has its own City Series uniform, with various elements thrown together to try and make it work as a fun theme the entire league can thrive on. Golden State’s uniforms feature Chinese characters and imagery to represent the rise of San Francisco’s Chinatown growth as the Warriors moved to the Bay area.

Then there is Cleveland’s uniform, one that simply throws the “Defend the Land” slogan that has picked up notoriety in recent years on a gray uniform that looks like it was created in a create-a-team mode in an NBA 2K video game.

You can even tell that Nike was not at all convinced their own marketing description was going to persuade anyone behind the supposed premise of the design, because it makes sure you know what exactly they are trying to get at.

For more than 75 years, the iconic giant “Guardians of Transportation” sandstone sculptures have stood guard over Cleveland’s Hope Memorial Bridge to protect travelers entering and leaving the city. The side panels of the Cavaliers City Edition uniform represent the Guardians but with a team-specific twist: The Cavs shield logo is inset as the head of each sculpture. Further graphic inspiration from the Guardians’ robes and a belt buckle featuring the silhouette of the state of Ohio symbolize the team’s stature as a regional protector. If those features aren’t clear enough, “The Land” is emblazoned across the chest to offer direct tribute to the entire Northeast Ohio area.

Why didn’t Nike just say to us “Look, here’s what we are trying to get at, but we know you won’t understand the design premise so we’ll just slap ‘The Land’ across the front so we can make it perfectly clear” so we don’t have to mess with the extra wordy descriptions nobody is going to believe anyway?

The marketing mumbo-jumbo reaches new heights with the explanation for the Orlando Magic City Series uniform.

Nike's explanation of the Orlando Magic's new alternates is emblematic of the terrible state of marketing. pic.twitter.com/bF5PiwbBX0

Naturally, the marketing blurbs trickle down to the NBA teams that are forced to show off their new designs. The response online is not always all that flattering for those franchises, like the Dallas Mavericks have learned with their uniforms.

Only in Dallas will you feel the energy the downtown skyline brings to its Dallasites. Marked by the neon glow on the letters, numbers and piping, the new Mavs City Edition Jersey reflects the swagger of the Big D and the vibrancy of Dallas nights.#NIKExNBA #MFFL pic.twitter.com/aNNxUeJD8c

Can we just bring back the green unis?

These are worse than the silver ones we wore only once

You can check out all of the released designs in Nike’s City Series for yourself on Nike’s website. Not all of the uniform designs are bad, honestly, but the final product just looks as though Nike is attempting to justify the contract they signed with the NBA.

Of course, from a business standpoint, that makes perfect sense. You don’t put out big money only to take partial advantage of having the contract. Nike is in this to maximize their return on investment, and throwing out unique alternate uniforms is one of the easiest ways to gobble up all the cash from NBA fans who are prepared to own anything and everything from the NBA store that relates to their home team.

So when Nike says they are honoring the great legacy of the fans who make the NBA franchises what they are today, we all know they are more about honoring the money those fans will end up sending Nike’s way. And there is nothing wrong with that. There just isn’t a great way to put that in writing in the press releases showing off the new uniforms that look like they are more suitable for some minor league basketball circuit than they are the actual NBA.