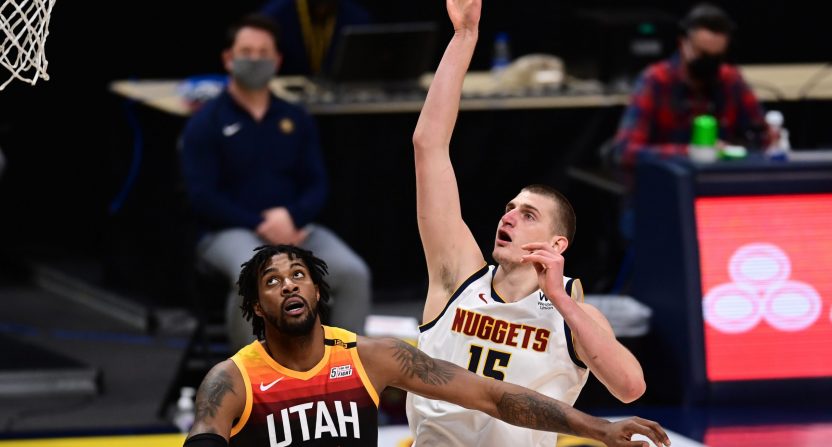 Denver Nuggets center Nikola Jokic put his highly unique skills on full display to lead the Nuggets to a 128-117 win over the Utah Jazz on Sunday in Denver. Utah (15-5) entered this game on a crazy heater, with wins in 11 straight games. The Nuggets needed Jokic’s A-game to end Utah’s winning streak, and definitely got it.

Nikola Jokic dropped 33 points in the first half against the Jazz.

That’s the most by a Nuggets player since AI scored 33 in the first half on Dec. 5, 2007 👀 pic.twitter.com/BirBOvs1Wn

Jokic also pulled down 12 rebounds and had five assists. That’s nothing new for Jokic, who’s averaging close to a triple-double on the season: 26.8 points, 11.8 rebounds, and 8.6 assists.

And Sunday’s double-double gives Jokic 20 straight to start the 2020-21 season. That’s the second-longest double-double streak to start a season (since the NBA-ABA merger), behind only Bill Walton’s 34-game streak in 1976-77.

Nikola Jokić recorded his 20th double-double of the season.

That's the 2nd-longest streak to start a season since the NBA-ABA merger, trailing only Bill Walton's 34-game streak in 1976-77. pic.twitter.com/f4GQ4ic3kR

Jokic is playing like at an MVP level, and it’s led the Nuggets (12-8) to wins in six of their last seven games, capped off by this big victory on Sunday.

Things should get much more favorable for the Nuggets on Monday — granted, the back-to-backs are always tough — in a home game against the Detroit Pistons (5-15). But that’s followed by what should be a thriller on Thursday night in Los Angeles for a nationally televised (TNT) game against the Lakers.