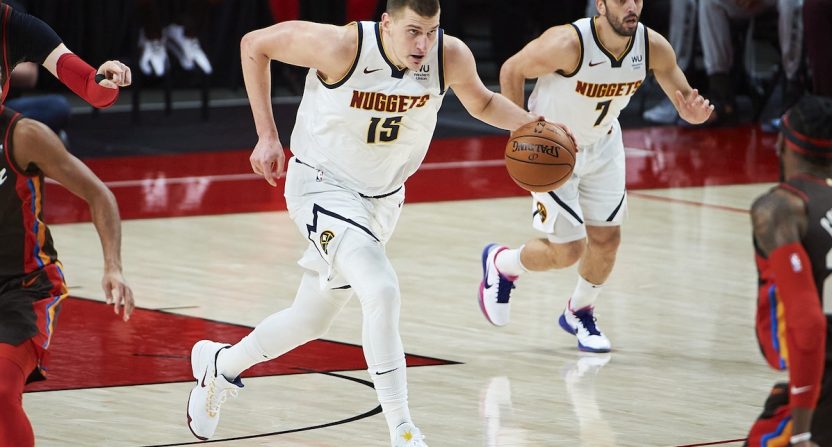 Nikola Jokic played like a Most Valuable Player, scoring 36 points with eight rebounds and six assists to lead the Denver Nuggets to a 125-115 victory over the Portland Trail Blazers in Game 6 of their first-round NBA playoff series.

With the win, Denver eliminates Portland and advances to play the winner of the Lakers-Suns series in the second round.

Michael Porter Jr. added 26 points and Monte Morris scored 22 to rally the Nuggets from a 14-point third quarter deficit. Denver outscored Portland 28-14 in the fourth quarter, stunning the Blazers on their home court with the end of the season at stake.

Damian Lillard led the Blazers with 25 points, but shot 8-for-25 overall and went 3-for-11 from three-point range. In the fourth quarter, Portland’s superstar shot 1-for-6 from the field. With the Blazers facing elimination, the performance was undoubtedly disappointing. But Lillard may also have been disoriented from hitting his head on the court late in the game.

Malone says some of his assistants said Damian Lillard fell hard and may have hit his head in the fourth quarter. It was clear he wasn't right.

The Blazers also wouldn’t have gotten to this point without Lillard scoring 55 points in Game 5 — hitting 12 of 17 three-pointers — to carry his team to a double-overtime win. And he hit 35 threes in six games, setting an NBA record for the most made in a playoff series.

C.J. McCollum added 21 points for Portland, but shot 9-for-21 — and 2-for-8 from three-point range — in the game. That includes going 1-for-4 in the fourth quarter. With Lillard struggling, no other Blazers player could make up the difference.

Michael Porter Jr. (22 PTS) ties the postseason record for threes made in a quarter with 6 triples in the 1st! #NBAPlayoffs on TNT pic.twitter.com/RZyd3Jc4HY

The Blazers appeared to be a good position to begin Game 5. Porter Jr. had a blistering start for Denver, scoring 22 points in the first quarter while hitting 6-of-7 three-pointers. Yet Portland had a 33-29 lead after the first 12 minutes of play and led 68-61 at the half.

Monte Morris sinks the floater at the buzzer 🚨

We've got a close one heading into the 4Q. pic.twitter.com/a6u4EbU7EC

However, the Nuggets charged hard in the third quarter, cutting the Blazers’ lead to three points going into the fourth. Remember, Portland had a 14-point lead with 4:53 remaining in the quarter. By that point, the Blazers looked like a team hoping not to lose, feeling the pressure of being eliminated on their home court.

With Portland back-pedaling, Jokic pushed them to the floor. He scored 20 points in that fourth quarter, establishing his authority over Jusuf Nurkic or any other defender the Blazers could run at him. And when he wasn’t scoring, Jokic found the open man, resulting in big three-pointers from Austin Rivers and Aaron Gordon that killed any rallies Portland could attempt.

While the Nuggets advance, the Blazers are left with questions following a second consecutive first-round playoff loss.

Portland’s front office will have to address getting Lillard some help during the offseason. Dame D.O.L.L.A. can’t do it all by himself if the Blazers want to be a serious contender in the NBA’s Western Conference. Next year’s squad could have quite a different look, likely including another coach replacing Terry Stotts on the Portland bench.