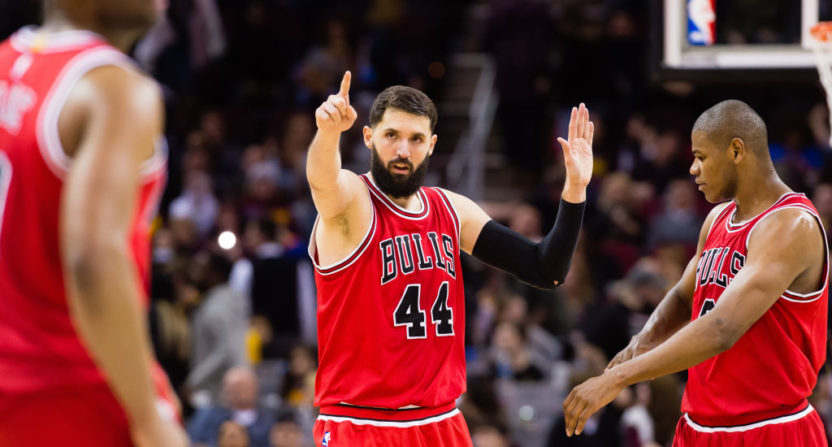 Last week, a fight in practice between Chicago Bulls’ teammates Bobby Portis and Nikola Mirotic (#44 above) led to Mirotic being hospitalized with a concussion and two broken bones in his face. Now, Mirotic has reportedly told the Bulls to either trade him or get rid of Portis by the time he returns.

Here’s more information on this from Joe Cowley of The Chicago Sun-Times:

The Bobby Portis-Nikola Mirotic story is not about to have a happy ending.

Multiple sources informed the Sun-Times on Thursday that in the last 24 hours, Mirotic’s camp has notified the organization that it’s a “me or him’’ ultimatum, with Mirotic insisting that when he is ready to return to action either Portis is gone or he wants to be.

Mirotic would have to waive his no-trade clause if the organization does stay with Portis, but that doesn’t seem to be an obstacle for the 26-year-old forward.

…The Bulls immediately suspended Portis for eight games, and the hope was that once Mirotic did heal up from the concussion, and likely surgery, both sides would be able to sit down and move past the incident.

That seems all but off the table at this point, however, at least from the Mirotic camp.

This may all be easier said than done, though. The Bulls aren’t going to have much trade leverage for either player given the publicity around incident (and now, around Mirotic’s apparent demands). And it’s not particularly clear which player they should hang on to if it is in fact “me or him.” 26-year-old power forward Mirotic has been with the team longer, as he’s entering his fourth season with the Bulls, and he’s been a useful piece, averaging 10.8 points and 5.3 rebounds per game over that span. However, rookie Lauri Markkanen has a similar skillset  and has impressed so far. Meanwhile, Portis also plays power forward, but has only averaged 6.9 points and 5.0 rebounds over his two seasons with the Bulls, and reports have him instigating this incident. However, he’s just 22, and he’s likely to bring even less in return than Mirotic thanks to the reports about this fight. On the other side, though, it may be easier for Chicago to trade him quickly:

New development: There are indications Mirotic now would pass on veto and accept trade, per sources. Mirotic can't be traded until Jan. 18.

In any case, this is a far from ideal situation for the Bulls. You don’t usually want to see players fighting in practice at all, and certainly not in a way that sends one to the hospital. And this fight and the subsequent ultimatum have likely reduced the trade value of both Mirotic and Portis. We’ll see how the Bulls handle this, but it seems clear that Mirotic doesn’t want to be on the same team as Portis any more. And it’s hard to blame him.