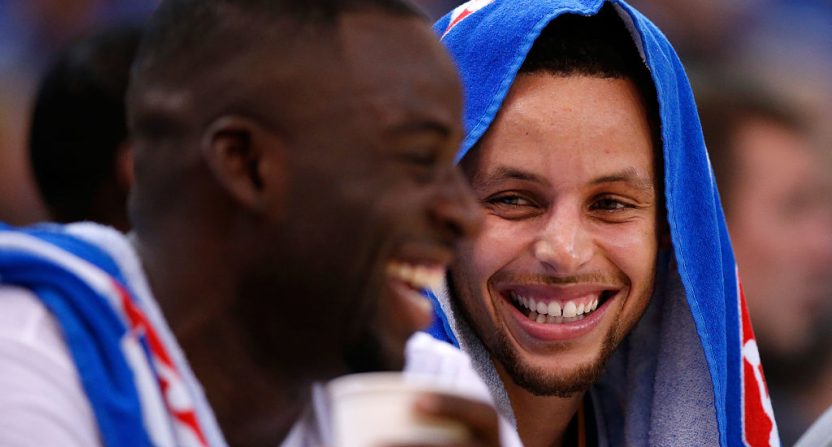 Steph Curry was on Feherty this week, and in the middle of a typically insightful/irreverent interview with the show’s namesake host, Curry dropped a hint on what he might do post-basketball.

A transcript if you can’t watch that video:

“I’ve thought about it. I’m very sensitive to the experience of the PGA Tour guys out there who have dedicated their life to what they do, just like I have with basketball. I don’t think I could, obviously, just jump out there. It’d be a lot of work that would go into it.

“I have the passion for the game, I think, to fight through whatever it would take. I don’t know if it’s in the cards after I’m done playing, but I will still be playing golf until (basketball) is over.”

It’s nice of Steph to casually mention his respect for the “PGA Tour guys” right before essentially hinting that he thinks he could commit full time to golf in his mid-30s and become a professional. Plenty of professional athletes have well-founded confidence in their own talents and abilities, but it’s inherently insulting when someone like Stephen Curry implies the only thing keeping him from the PGA Tour is time and commitment.

Could Steph have started as a kid and been a pro? We’ll never know! But what we do know is that right now, it’s not going to happen. One thing people might not seem to understand about golf, specifically, is how good the professionals are. Here’s Steph’s current handicap lookup, because the Internet is a wonderful thing: 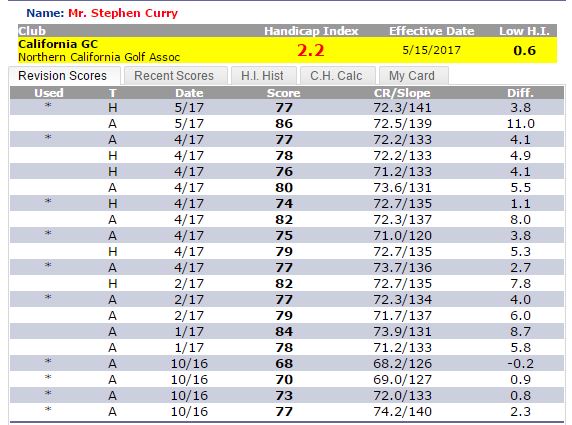 There are a few interesting things to look at there, most notably the fact that Steph really picked up the golfing pace in April, once the Warriors were pretty much assured of their playoff seeding. He even squeezed in a few May rounds, and his rounds at the end of the year last year were his best, which means he probably puts in a lot of course time in the offseason. (Of course, that 68, his lowest score, came on the easiest track he played.)

That is the handicap screen of a very good player, there’s no doubt about that. A 2.2 handicap isn’t quite good enough to try to qualify for the U.S. Open (it’d have to be at 1.4 or better), but then Steph could probably get down below that if necessary; after all, his all time low is 0.6, making him more or less a scratch player at his best. Unfortunately for Steph, when we’re talking about the very top of the golfing pyramid, scratch is shit.

The best golfers at your local high school are probably scratch players, or better. Want to guess the odds on them playing professional golf? Curry is much closer in skill to me as a golfer than he is to anyone playing golf for money. You’d think a professional athlete, of all people, would know just how hard it is to be a professional athlete in any given discipline, but Curry is essentially implying that any really good varsity basketball player can make the NBA if they just focus on it.

If you really want to read more about how impossible Steph’s post-basketball career path is, I couldn’t recommend this book more. Or you could read these tweets from Shane Bacon, who covers golf for FOX Sports and is a very good player himself,  having played on the mini-tours:

I love Steph, but there are hundreds of thousands of guys out there trying to become a top-50 player. I meet them ALL the time.

Guys that can fire a 64 on any given day; guys on Tours sponsored by ANYTHING and everything.

Golf is the one sport where this occurs; guys think "ya know, I could do this!" Nobody thinks, "Say, my fastball still has heat!"

I don't hate on anyone trying to play golf for a living. It's BRUTAL. But I always laugh at the Jerry Rice/Steph type.

Yes … learned very, very, very quickly that I was out of my league. Shooting 71 is cute, but at every event that means you're 8 back https://t.co/gCSZ4QxR1f

Steph Curry is an absolute magician, there’s no doubt about that. And he has some of the best hand-eye coordination in the world. But he’s not playing professional golf after basketball.