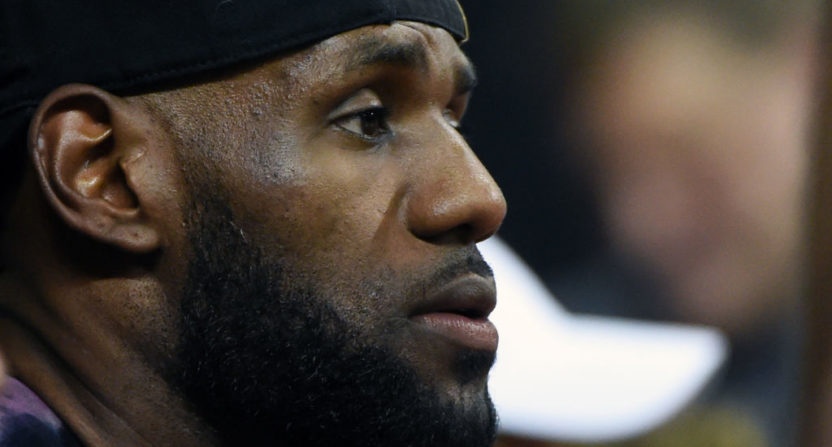 After getting blown away by the Golden State Warriors in the NBA Finals, the offseason has not been particularly kind to the Cleveland Cavaliers. An offseason of turmoil has failed to settle down, and the biggest tidal wave may be coming, because LeBron James reportedly is growing more and more concerned about the future of the franchise.

The timing of the alleged frustration is notable, because James is eligible to become a free agent at the end of the 2017-18 season, and the speculation about James’ future has already been running rampant just as it has every few years throughout his career. James may be getting older, but he is still proving himself to be a very valuable asset on the court every time he steps out there, so it would make sense for the Cavaliers to want to keep James as happy as they possibly can. Unfortunately, the Cavaliers continue to be a bit of a mess in the front office, which is astounding considering how far it has come in recent years.

This offseason has seen the Cavs make a change at general manager and supposedly miss out on the chance to add Jimmy Butler from the Chicago Bulls, as it was reported Cavs players were reaching out to Butler to advise him to do whatever it took to not go to Cleveland due to the mess in the franchise. The Cavs also are still on the prowl for a new general manager, which leaves the future of the team lingering in doubt.

In the meantime, the rest of the league has been quite busy improving their teams as much as possible through the draft and free agency and trades.

James’ frustration with the Griffin situation didn’t end there. Other teams loaded up. The Warriors retooled with Kevin Durant re-signing for less money than he could have and Steph Curry re-signing for a max deal. They retained Andre Iguodala and Shaun Livingston and added shooters Nick Young and Omri Casspi.

The Warriors are maybe deeper and better than they were last season. It should be noted that the Warriors gave general manager Bob Myers an extension and promotion after losing to the Cavs in the 2016 Finals. That should’ve been the time the Cavs rewarded Griffin for winning a championship – a contrast in how the franchises are run.

Everyone is doing something, while the Cavs are sitting around just expecting everything to be good to go, it seems.

Whatever happens from here on out falls on the shoulders of owner Dan Gilbert. Gilbert has proven his management of the franchise can be questionable. Having won an NBA title does help to some degree, but the criticisms are piling up at a rapid pace and James is inching closer and closer to being able to evaluate his options once again. If James wants to win again before his career wraps up down the line, the possibility of Cleveland being the place to do it continues to erode under Gilbert’s leadership.

Don’t be shocked if James has enough of this fiasco and moves once again to another franchise that is showing itself to be capable of building for a stronger future.