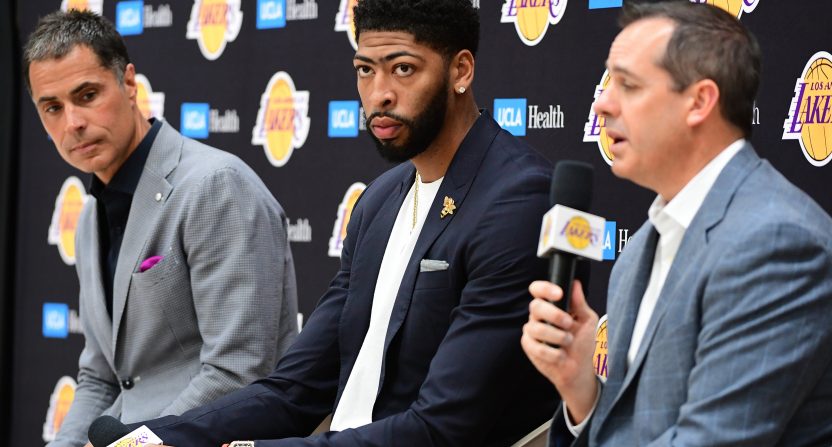 Imagine you’re Anthony Davis. You’re great at basketball, and everyone knows it. You’re the only person in human civilization to make the unibrow look cool. You’ve escaped from the NBA purgatory of New Orleans and landed in the NBA penthouse of Los Angeles. And you’ve got arguably the league’s all-time greatest player — LeBron James — as your teammate.

What more could you ask for? Well, yes, you didn’t get Kawhi Leonard. That’s okay. Your team is considered by some to be the betting favorite to win the NBA championship. You’ve already declared that even without Leonard: “I’ll put our roster up against anybody.”

You add: “To get the opportunity to do that and come here and play for an organization that’s all about winning, and winning championships, and that’s the only goal. I think that was the biggest thing for me.”

You also have leverage. You haven’t signed a contract extension and will become a free agent next summer. The Lakers will do everything possible to make you happy. Sounds ideal right?

Perhaps. Next season will be unlike any he’s ever faced as a pro. Is Davis ready for the pressure? Because if Los Angeles doesn’t make a deep playoff run, he will shoulder a considerable amount of the blame.

The Lakers don’t develop great big men. They acquire them: from Wilt Chamberlain to Davis. Trading for Kareem Abdul Jabbar in the 1970s was one of the biggest deals in sports history, eventually leading to five championships. Shaquille O’Neal signed as a free agent in 1996, resulting in a three straight titles. Pau Gasol, who came over in a midseason trade in 2008, won back-to-back championships.

That’s the bar. Those are the expectations. And not every big man has been up to the challenge.

The last time the Lakers acquired a superstar big man it was a colossal disappointment. Dwight Howard was traded from Orlando to Los Angeles in the summer of 2012 as the Lakers formed their own superteam of Howard, Gasol, Kobe Bryant, and Steve Nash to take on defending champion Miami and its Big 3 of LeBron, Dwyane Wade, and Chris Bosh. But Howard — beset by injuries and constantly bickering with teammates — was a poor fit.

Los Angeles, the preseason runner-up betting favorite to the Heat, finished 45-37 and was swept in the first round. Howard, the fall guy, left for the Hawks as a free agent.

Will Davis be the next O’Neal, ushering a new era of L.A. dominance? Or the next Howard who exited after one lackluster season?

But for all of Davis’ ability, New Orleans only reached the postseason twice with him and won one playoff series. In the NBA, where one player can make a significant difference, that’s concerning. Most of the blame probably should go to management for not doing enough to build around a generational talent. The Pelicans did make a move for DeMarcus Cousins in February 2017 with the idea of giving them a Twin Towers lineup. But due to Cousins’ injuries, the twosome only played 65 games together over the course of a season and a half.

The lack of winning led to Davis’ demand for a trade. Davis got what he wanted. He’s in L.A. with LeBron. Albeit a LeBron who will turn 35 in December and is coming off arguably the worst season of his career. Can LeBron teach Davis how to win at the highest level? Can Davis ease LeBron’s burden?

These are pivotal questions. If LeBron was just a few years younger and not coming off an injury-plagued season, this union would be a slam dunk. The best 1-2 punch in NBA history. But for the first time in his career, the previously indestructible James showed signs of aging by missing significant time with a groin injury.

A fully healthy LeBron should make a difference. Neither James nor Davis can afford to play less than 70 games because the Lakers’ roster is paper thin. That’s the price they paid for waiting for Kawhi. Most of the other quality free agents signed with other teams. The Lakers gobbled up the remains: guys like DeMarcus Cousins, Danny Green, Quinn Cook, Jared Dudley, and Avery Bradley while bringing back dudes like Rajon Rondo, JaVale McGee, and Kentavious Caldwell-Pope.

It’s a motley crew. The X-factor is DeMarcus Cousins. If (that’s a big IF), he’s healthy, he gives the Lakers another All-Star caliber big man. He also would play center, allowing Davis to slide over to his preferred power forward slot.

Will we ever see the DeMarcus Cousins pre-Achilles and quad injuries again? With Golden State, he was occasionally great in spurts and terrible at other times. But he was also out of shape and has looked leaner this off-season. Cousins said he’s 100 percent healed and has set a goal to play 82 games. Cousins has never played all 82 games.

Davis and LeBron are going to need all the help they can get. If not from Cousins, then perhaps Kyle Kuzma continues his upward trajectory.

Who would ever think that a team featuring LeBron James and Anthony Davis would have so many unknowns? What is certain? Davis’s reputation is riding on this season.