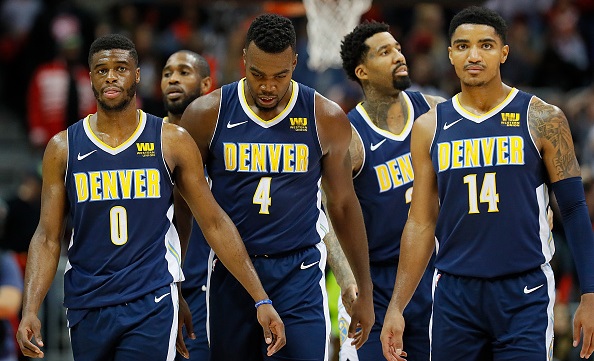 After a disappointing 1-3 start where they’ve struggled on the offensive end, the Denver Nuggets showed very encouraging signs of life in weekend wins over Atlanta and Brooklyn.

The Nuggets’ offense finished last season third in points per game and fourth in points per 100 possessions, helping convince four-time All-Star Paul Millsap to leave Atlanta and get this Denver team to the playoffs for the first time since the 2012-13 season.

But there were several factors that contributed to the Nuggets’ disappointing offensive output over the season’s first several games.

“Paul and everybody is still trying to kinda feel each other out, get acclimated to each other and get comfortable with each other,” said Denver head coach Mike Malone.

The Nuggets are still trying to build chemistry and continuity among their new and improved roster, including bringing Millsap into the fold and Wilson Chandler getting more minutes at small forward.

“Guys still trying to get a feel for each other,” said wing Will Barton.

And in still getting a feel for one another, Barton told The Comeback that it’s impacted the team’s ability to play with the same pace, aggressiveness and confidence they had last season. After playing with the league’s seventh-fastest pace (or approximate number of possessions per 48 minutes) a season ago, Denver is currently 19th, according to Basketball-Reference (more on this in a bit).

Millsap said that the ball movement has been lacking, which has definitely contributed to the offense falling short of expectations early on.

“When we struggle, I think that’s the main thing,” Millsap told The Comeback.

Malone focused on turnovers, which has been a consistent problem for Denver offensively, and a lack of body movement, a term which he further explained.

“Last year, I thought we were one of the better cutting teams in the NBA,” Malone said. “And right now, I think we have to get back to that.”

A major contributing factor to the slow start has also been the youth and inexperience of the Nuggets point guards. There was justifiable cause for alarm on the day of the season opener when the team released Jameer Nelson, its only veteran point guard, in favor of veteran forward Richard Jefferson. Jamal Murray, 20, is in his second year in the league and his first as the starter. Emannuel Mudiay is 21 and in his third year in the league. And those are their only options at the point right now.

The inexperience of Murray and Mudiay is why so many analysts and media members thought that Denver would be an ideal fit for Phoenix Suns point guard Eric Bledsoe, who’s fallen out of favor with the team and is on the trading block. In fact, there was chatter among various front office staffers around the league at the Barclays Center on Sunday before Denver’s game against Brooklyn about how Bledsoe would make sense on this Nuggets roster.

Murray, whose nickname is Blue Arrow, admitted to lacking confidence in his game at times over the first few games, with Malone saying that Murray came up to him and said he felt like a “broken arrow” last week. The team is hoping that all the reps and game experience he and Mudiay will get this season will expedite the pair’s developmental process, help their games and confidence grow and get them ready for what the Nuggets hope will be a postseason run.

As with nearly any team on a run of subpar games, getting consistency for 48 minutes has been an issue with these Nuggets. But there have been parts of games where Denver has excelled, confirming in Millsap’s mind why he made the right choice in leaving Atlanta for the Nuggets in July.

“Even in our losses, we’ve had great quarters where we played on both ends of the court, and then that one quarter where we take off and teams come out and beat us,” Millsap said. “I think going forward, we know what we need to do.”

Malone said he hoped the fourth quarter in Friday’s win over the Hawks, in which Millsap scored seven crucial points to leads them in his return to Atlanta — one Millsap called a must-win game — would help propel this team forward offensively. Based on what happened Sunday against the Nets, it did.

Denver shot 50 percent from the field, 55 percent from three and outscored Brooklyn 40-21 in the third quarter in a 124-111 win that had the Nuggets players finally feel like their offense was back to last year’s elite levels. Denver played at a fast pace, committed just six turnovers and coughed it up on just 5.7 percent of its possessions, the lowest single-game turnover percentage for a team in any game this season, per Cleaning The Glass. The Nuggets’ 118.7 offensive rating for the game was in the 92nd percentile among games played in 2017-18, per CTG.

But perhaps the most encouraging sign from the win on Sunday was the confident, aggressive, inspired play from Murray. He scored a game-high 26 points on 8-of-14 shooting and hit all eight of his free throw attempts. Once Murray saw shots falling, he knew that he was going to have a good night, he said.

If Murray continues his upward trajectory, the Jokic-Millsap combo continues to gel and Denver continues to get strong contributions from Gary Harris, Wilson Chandler, Barton, Mudiay and others, this Nuggets team will again have one of the league’s most diverse and potent offenses and have a great shot to make the playoffs. If nights like Sunday outnumber the games where there are growing pains, Denver will be fun to watch and tough to defend, justifying the preseason hype so many bestowed on this young and growing Nuggets team.