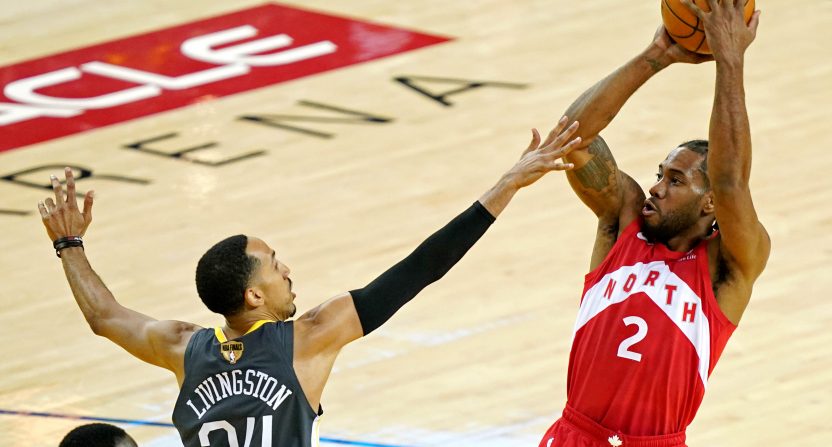 If the Toronto Raptors win just one of the next three games (if necessary), they will be NBA champions for the first time in franchise history.

The Raptors took a commanding 3-1 series lead in the NBA Finals with a 105-92 victory over the Golden State Warriors in Game 4 on Friday night at Oracle Arena.

It’s the second straight game the Raptors entered as road underdogs (5.5-point underdogs in Game 4), and went on to win by double-digits (they won 123-109 in Game 3).

The Warriors led by as many as 11 in the first half, but Toronto put together a remarkable 37-21 third quarter, which included 17 points from two-way superstar Kawhi Leonard.

Kawhi heats up in the 3rd, scoring 17 of his 31 PTS! #WeTheNorth #NBAFinals

Leonard has been the best player in the series, and that’s the main reason the Raptors have a 3-1 lead. However, it’s been a terrific teamwide effort, and the Raptors have truly looked like the better *team* through four games. Offensively, Toronto’s ball movement, pace, and shot-making have been tremendous, while also being very disruptive on the defensive end. There’s nothing fluky about the series results to this point.

If the Raptors keep up their level of play, odds are high that they will find a way to win one of a potential three games. However, the Warriors — back-to-back champions and winners of three of the last four titles — absolutely can’t be counted out. And it’s possible Kevin Durant is able to return in the series, perhaps as soon as Game 5 according to Golden State head coach Steve Kerr.

Steve Kerr on Kevin Durant: "We're hoping he can play Game 5 or 6." Won't give any other updated details.

But even if Durant is able to return, we have no idea how effective he’ll be.

And two of a possible three remaining games would be in Toronto; Scotiabank Arena is sure to be an insanely electric environment. That’s where the Raptors will look to close out the series on Monday in Game 5, and they open as 2.5-point favorites.