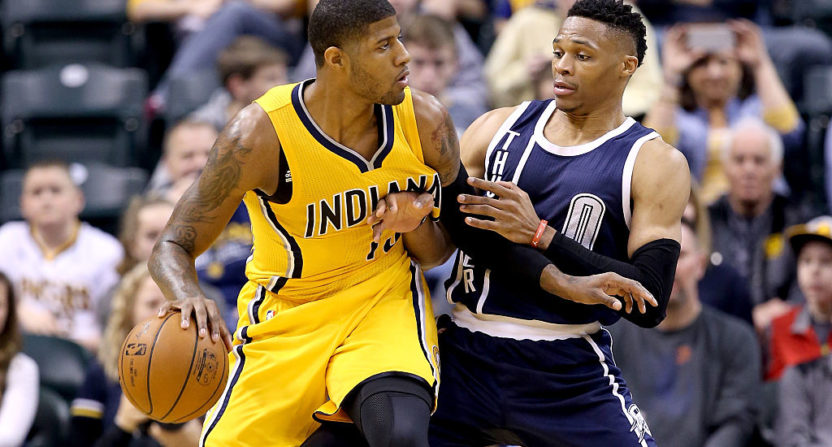 We’ve been hearing the Paul George trade rumors for weeks, but most of them revolved around a deal with the Celtics or Cavs. Out of nowhere on Friday night, the Pacers reached a deal to send PG13 to … the Thunder?

Paul George has been traded to OKC, per sources

Yup, that’s right. The Thunder will place George alongside triple-double king Russell Westbrook next season. The tradeoff is OKC had to send starting shooting guard Victor Oladipo and promising forward Domantas Sabonis to the Pacers in return.

That is a pretty ideal trade for the Pacers, and a very weird one for the Thunder. Unless George unexpectedly falls in love with Oklahoma City, he’s quite intent on joining the Lakers next summer in free agency.

Oladipo had a somewhat disappointing, one-year stint for the Thunder after being traded from the Magic. He put up solid numbers — 15.9 points with a 51.0 effective field goal percentage — but OKC wanted him to blossom as a second star alongside Westbrook. Even though he didn’t live up to that expectation in 2016-17, he’s still a freakishly athletic 25-year-old.

There’s no doubt George, a four-time All-Star and three-time All-NBA selection, is a major upgrade. But now the Thunder are going all in on him and Westbrook taking down the Warriors dynasty. (Not to mention the new backcourt duo of James Harden and Chris Paul in Houston.) Westbrook and George are both superstars, but anything more than a Western Conference Finals appearance is highly, highly unlikely.

It also gets a bit more complicated when you factor in that Westbrook has a player option after next season. Assuming George keeps his sights on Los Angeles, what reason will Westbrook have to stay in OKC other than loyalty? If Westbrook opted in for the 2018-19 season, he’d be back to completely carrying a team on his back, except that team’s supporting cast could be even worse than this year’s. And, unless this George/Westbrook tandem totally bombs and OKC misses the playoffs, the Timberwolves own the Thunder’s 2018 first-round draft pick via Friday’s trade with the Jazz for Ricky Rubio.

The Thunder will have their chances to build up through free agency, but if they can’t snag some big names for the long term ( at least dropping Oladipo’s $21 million contract should help in this regard), there’s nothing to attract a ringless superstar like Westbrook.

Westbrook and George will be a pleasure to watch for one year, but one year is probably all OKC will get.