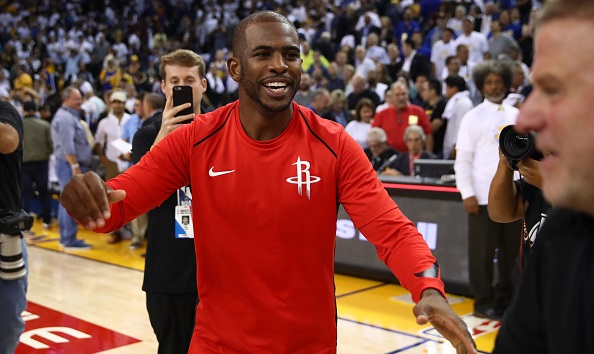 The NBA regular season began on Oct. 17, so we’re exactly one calendar month into the regular season. Every team has played between 12 and 16 games going into Friday’s action, so the sample sizes are beginning to get beyond the “too small” or “too early to tell” stage.

We’ve already addressed Oklahoma City’s early struggles, Cleveland’s problems that they’re beginning to push past and how well Boston is playing — 14 straight wins and killing it defensively — following Thursday’s statement win over Golden State. But there are plenty of other huge topics, storylines and issues to discuss so far, starting with the biggest question facing the most elite team we haven’t spoken about yet, Houston.

1) How will Houston be when Chris Paul comes back?

One of the biggest questions going into the 2017-2018 season was how James Harden and Chris Paul would co-exist in the Rockets backcourt. CP3 suffered a left knee contusion in Houston’s opening night win over Golden State, after scoring four points, 10 assists and eight rebounds, but he was a minus-13 against the fast-paced Warriors.

Houston is off to an 12-4 start and got Paul back on Thursday night, scoring 90 in the first half in a blowout win in Phoenix. The Rockets are currently second in points per game and per 100 possessions and 11th in defensive efficiency. Paul, who had a double-double on Thursday, will help on defense, but we’re still left to wonder how the Houston offense will perform in those 15-18 minutes per game when Harden and Paul are on the floor together.

The league hasn’t seen three players like Giannis Antetokounmpo, Kristaps Porzingis and Joel Embiid before. All centers who can handle like guards, can run the floor with effortless grace and have range well beyond the 3-point arc.

After one month of the season, could they all be MVP candidates?

Giannis, 22, leads the league in Player Efficiency Rating, is second in the league in scoring at 30.6 points per game, third in win shares, fourth in free throw attempts, fifth in blocks per game and just outside the top 10 in rebounds. Oh, and he also averages 4.6 assists per game. He’s a legit MVP threat and could be the future of the NBA.

New York, which we’ll get to in a bit, has leaned on Porzingis heavily this season following the Carmelo Anthony trade. Porzingis is second in usage rate behind Harden and is third in the league in scoring at 28.9 points per game. He’s 4th in blocks, 5th in PER — ahead of Stephen Curry — and 10th in free throw attempts. He’s still just 22 and has shown he’s the real deal. He won’t win MVP this year but could be in discussions in a few years.

All Joel Embiid did on Wednesday against the Lakers was put up 46 points, 15 rebounds, seven assists and seven blocks. That’s a historically good game, but more importantly, he’s played in 12 of Philadelphia’s 14 contests so far. Embiid, 23, is averaging 23 points, 11.2 rebounds, 3.5 assists and 1.9 blocks. If injuries don’t derail him and the Sixers are a top-three team in the East, maybe he gets MVP consideration this year.

3) How are this year’s rookies doing?

Ben Simmons is ridiculous. He’s 6-foot-10 with an absurd wingspan and in a shocking twist, that’s helping him defend opposing point guards, leading to him being tops among PGs this season in Defensive Real Plus-Minus. Simmons is averaging 17.8 points, 9.2 rebounds, 7.7 assists and 1.9 steals per game. And he’s 21 years old. Think about that.

Simmons posted the most anonymous near triple-double in recent memory on Wednesday, with 18 points, 10 assists, nine rebounds and five steals against the Lakers and nobody cared because of Embiid’s night. The Sixers are going to be fun for a long time if their core remains healthy.

On to Lonzo Ball, not nearly the most, or second-most, interesting member of his family right now. He has flaws, large and important ones, mainly having to do with his shot. He’s scoring 73.4 points per 100 shot attempts, which is in the bottom percentile in the league this season, per Cleaning The Glass. But it may not matter.

If Ball continues to put up strong rebound and assist numbers, at worst he’ll be Ricky Rubio if he works on his defense and improves his shot even a little. Obviously, that’s well below the expectations placed on Ball going in, but second overall picks have been far worse historically than a Rubio-type.

We haven’t even gotten to other rookies who are performing really, really well, like Boston’s Jayson Tatum, Utah’s Donovan Mitchell, Dallas’ Dennis Smith and the Lakers’ Kyle Kuzma. John Collins is showing a lot of promise for Atlanta, Lauri Markkanen has been a bright spot for an abysmal Chicago team, Dillon Brooks and OG Anunoby are playing well for Memphis and Toronto, respectively, Mike James and Josh Jackson are doing nicely for Phoenix and Frank Ntilikina is providing a spark for the Knicks.

This rookie class is loaded, and will make huge impacts for a long time in this league.

4) What should we make of the surprise teams so far?

There are always teams which get hot over the first two or three weeks and we wonder whether they’re for real. Orlando has lost three straight and five of seven to get back to 8-7, but a .500 record may be good enough if the Magic remain better than average on both ends of the floor. But there’s plenty of reason to remain skeptical.

More interesting than Orlando’s start is the 10-4 start for the Detroit Pistons. They’re 7-1 at home at the new Little Caesars Arena, in the top 10 in both offensive and defensive efficiency while playing a slow, grinding style (23rd in possessions per 48 minutes) which Stan Van Gundy likes.

After rumors that SVG would be stripped of his GM duties and rumors surrounding the futures of point guard Reggie Jackson and center Andre Drummond, both guys are playing very well (Drummond is 10th in ESPN’s Real Plus Minus rankings system) and the Pistons are getting strong contributions from Avery Bradley and Tobias Harris in the starting lineup and Anthony Tolliver and Langston Galloway off the bench. Stay tuned with this Detroit team.

Two other surprise teams to get to: Memphis grabbed our attention right away with a 5-1 start which included a win over Golden State and two wins over Houston. The Grizzlies are 2-6 since then and have yet to be bit by their annual injury bug. Sell on Memphis.

Another team that’s made some noise has been New York, off to an 8-6 start that’s included five wins in seven games, but the Knicks have played 10 of their 14 games so far in Madison Square Garden. They’re 7-3 in those games, but the road won’t be as kind to Jeff Hornacek’s Knicks, who will be exploited on defense once their offense falls off.

5) Why has Minnesota done well with roster turnover and OKC hasn’t?

Not to get into the Thunder’s issues too much, but having core players like Karl-Anthony Towns and Andrew Wiggins already spend a year in Tom Thibodeau’s system has definitely contributed to the Wolves’ 9-5 start, currently good for third in the Western Conference.

What Towns and Wiggins, along with key new additions Jimmy Butler, Jeff Teague, Taj Gibson and Jamal Crawford have failed to do is help the team improve defensively. Minnesota allows 108.9 points per game, 25th in the league, and 110.3 points per 100 possessions, good for 27th in the NBA. That’s not going to cut it if the Wolves want to do anything in the playoffs, or even get there. Minnesota has been able to do well despite that horrid D by having a top 10 offense so far that shoots a high percentage from the field and the line and is in the top 10 in offensive rebounds and turnovers per game.

For now, the Wolves are making it work. But the defense is a major issue.

6) The Spurs keep on tickin’

How is San Antonio still fourth in the West with a 9-6 record without a single minute played by Kawhi Leonard, a top-five player in the NBA?

Gregg Popovich is a maestro at getting the most out of his role players, but a huge factor has been LaMarcus Aldridge finally performing like a top-level player in a Spurs uniform. He’s at 22 points per game on 49.8 percent shooting from the field, and is shooting 36 percent from three despite attempting more than twice as many threes per game as last season, a career-high 1.7 attempts per game (that’s still relatively low, but progress is being made).

San Antonio hasn’t been able to replace Leonard’s offensive impact, but it’s top five in both scoring defense and defensive efficiency with Kyle Anderson and Danny Green locking down the perimeter — with even newcomer Rudy Gay helping on that end — and Pau Gasol doing strong work inside.

Just when you think it’s safe to write off the Spurs, Pop still has his guys going full steam ahead.

7) The Warriors are thriving despite a tough schedule. Do other teams’ problems matter?

Talking about the Rockets, Thunder, Cavs and Celtics is nice, but are their issues important if the Warriors are still so much better? Golden State is 11-4 despite the league’s hardest schedule thus far (tied with Charlotte), per ESPN.

If Golden State remains healthy, every team is still trying, yearning and searching to get on the Dubs’ level. After the first month of the season, it doesn’t seem like they’re there yet.