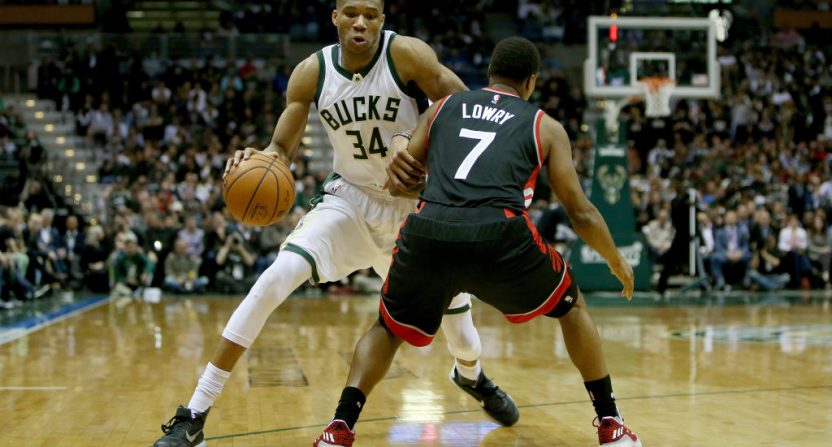 Giannis Antetokounmpo was so damn good for most of the Milwaukee Bucks’ first round playoff series against the Atlanta Hawks. That’s even in spite of some horrid free throw shooting.

The 22-year-old finished the series averaging 40.5 minutes per game and was so clearly gassed by the end of Game 6. He played 47 of 48 minutes. Still, he willed Milwaukee back from down 25 points and gave them a shot to force a Game 7, finishing with 34 points on 13-for-23 shooting.

But The Greek Freak made a very poor decision when the Bucks were trying to complete their comeback in the final seconds. Down 90-87 with 14 seconds left, Milwaukee took longer than it probably wanted to move its offense, and Antetokounmpo wound up guarded by Lowry, who’s nearly a full foot shorter than him, beyond the arc with just a few seconds left. He could have easily gotten any three-point shot up over the smaller defender, but instead he drove to the rim for a dunk with 3.5 seconds left … which didn’t help the Bucks much.

Milwaukee was out of timeouts, so after DeMar DeRozan hit two free throws to push the lead back to three, the Bucks needed a three anyway, and they had to go the length of the floor to get it. But then Tony Snell threw the ball away on the inbounds, ending the series and the Bucks’ season.

ESPN’s Myron Medcalf summed the situation up nicely in one tweet. Giannis looked like a smart veteran for most of the series, but on that last sequence his youth showed.

For the first time in a long time, Giannis looked like a 22-year-old in the final seconds. Gotta take the 3.

That’s a tough way for Giannis to enter the offseason, especially considering his series averages of 24.8 points, 9.5 rebounds, 4.0 assists, 2.2 steals, and 1.7 blocks were the main reason the Bucks were in position to challenge the Raptors.

But Game 6 wasn’t all about what Antetokounmpo did or did not do. Even for the Raptors, Thursday’s collapse was unbelievable. They led by 25 points late in the third quarter but found themselves down 82-80 inside of three minutes to play.

To their credit, they responded well before leaving the door open for the Bucks again on the closing possessions. At the time, this monster DeRozan dunk that put Toronto ahead 87-82 in the final minute felt like the dagger.

DeMar DeRozan with the monster dunk!

Toronto will need a lot more of that to knock off LeBron James and the Cavs in the second round.