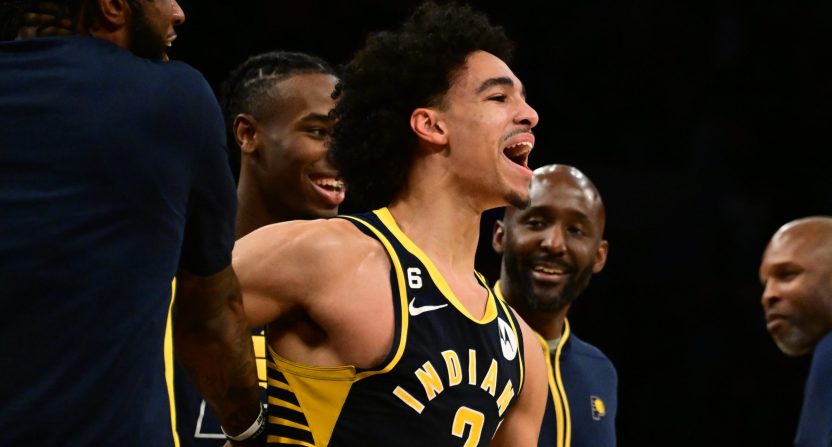 The Indiana Pacers stunned the Los Angeles Lakers with a crazy fourth-quarter comeback that was fittingly capped off with an incredible game-winning play in a 116-115 victory on Monday night.

The Lakers fouled Indiana with 8.7 seconds remaining, and then the Pacers followed with a chaotic possession that didn’t appear that it would be a success.

Myles Turner missed a three-point try, and Tyrese Haliburton got a long rebound before being surrounded by Lakers defenders.

With nowhere to go for a shot, Haliburton opted to throw a cross-court pass — which he released with under two seconds remaining — to Andrew Nembhard.

And the rookie out of Gonzaga nailed a three for the buzzer-beating win.

Andrew Nembhard with the crazy buzzer-beater for the Pacers win! 🏀🔥 pic.twitter.com/v7bx5cgRR6

That’s a ridiculous possession, with Haliburton and Nembhard each making amazing plays.

That dime summarizes Haliburton’s abilities as a passer, which have been put on full display over the last three games. In fact, he’s the first player in NBA history to have 40-plus assists and zero turnovers over a three-game span.

Since individual turnovers have been tracked (1977-78), Tyrese Haliburton is the first player with 40+ assists and zero turnovers over a three-game span. pic.twitter.com/TPQl7QkqEN

The Pacers (12-8) are one of the NBA’s most exciting and surprising teams, full of youth and upside. And they certainly showed that off in this unforgettable victory.

As for the other side, it’s more heartbreak and frustration for the Lakers and their fans. Los Angeles falls to 7-12 with the loss.

Here’s a peek at how the basketball world is reacting to the Pacers’ buzzer-beater and comeback win:

The Pacers came back to beat the Lakers despite a 17-point 4th quarter deficit.

Andrew Nembhard's buzzer-beating 3-pointer to game it was the @Pacers first game-winning buzzer-beater since Solomon Hill in 2014 against the Hornets. pic.twitter.com/vDTdDDAW04

the score with 9:59 remaining in the 4th quarter:

Lakers blew a 17-point lead in the 4th quarter… pic.twitter.com/62RfWNtoGV

The Pacers are the most fun team in sports

LeBron just played a brutal 4th quarter, guarded by 6-3 rookie Nembhard, allowing Lakers to lose a 17-pt lead at home to an Indiana playing back to back. NO CLOSER GENE. He finally did make late layup to give LA a 2-pt lead. But Nembhard, LBJ's man, drained a buzzer 3 to win it.

Lakers were really up by 17 in the 4th quarter, laughing, dancing and carrying on, just to let a rookie hit a game winner on them at home.