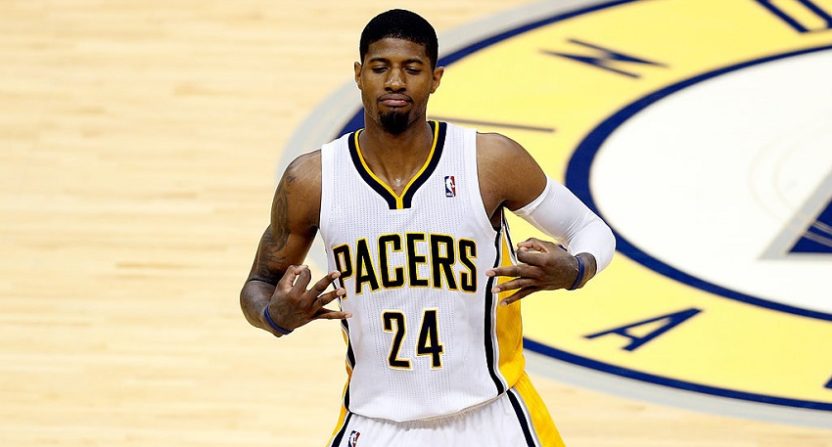 There’s a good chance that you had a better weekend than the Indiana Pacers did.

All-Star forward Paul George, Indiana’s franchise player, informed the team that he did not intend to stay with the team after he’s eligible to opt out of his contract following the 2017-18 season, as first reported by The Vertical’s Adrian Wojnarowski. George would reportedly prefer to sign with his hometown Los Angeles Lakers at that time. But the Pacers, led by president of basketball operations Kevin Pritchard, can trade him where they’d like before he hits the free agency market just over a year from now.

NBA Twitter popped and sizzled with rumors on Sunday following the latest WojBomb, and four teams emerged as the most likely suitors for George, for now: The Lakers, Cleveland, Boston and Houston. Does it make sense for either of those teams to acquire PG13 this summer? Here’s our quick breakdown on the current Paul George situation and how it might play out.

To trade or not to trade, that is the question. We’ll call it The Melo Dilemma.

Back in 2011, Carmelo Anthony made it clear that he only wanted to go to the New York Knicks, and would likely sign there following the 2010-2011 season. Rather than risk another team, like the New Jersey Nets, trade for him and then convince him to sign a long-term contract with the club, Knicks owner James Dolan didn’t want to take any chances and paid a king’s ransom to the Denver Nuggets — led by a deft young executive named Masai Ujiri — to acquire Anthony.

New York hasn’t yet fully recovered from that trade more than six years later, so you’d understand why Los Angeles would be reluctant to give up a package of young players and draft picks to bring on George only to surround him with lackluster talent. On the flipside, if the Lakers wait and Indiana deals him to one of the teams we’ll discuss in a bit, they run the risk of having George acclimate to a winning, contending culture and never hitting the open market.

What the Lakers ultimately decide to do with George is a huge early test for the recently hired executive duo of Magic Johnson and Rob Pelinka.

Following the five-game loss to Golden State last week in the NBA Finals, one of the possible improvements we mentioned for the Cavs was the acquisition of George.

Pritchard wisely reached out to Cleveland to gauge interest in a trade, per reports, but the Cavs don’t really have much to offer beyond Kevin Love and Kyrie Irving, the latter of whom the team would certainly not deal. There’s also an issue of fit between George and the Cavs, who would reportedly be okay with trading for George without the assurance of a contract extension.

Irving and LeBron James were eighth and 12th, respectively, in usage percentage, “an estimate of the percentage of team plays used by a player while he was on the floor,” according to Basketball-Reference. George ranked 20th. Would George be able to adjust playing off the ball more often than he has with the Pacers? Would he still be able to be an impactful offensive player with the ball in his hands less frequently?

Unless Indiana takes a lesser offer from Cleveland relative to what a team like Boston has to offer, we probably won’t find out.

The Celtics were reportedly deep in talks with Indiana prior to February’s trade deadline, and now Boston has an additional first-round pick following their trade with Philadelphia over the weekend. So not only does Boston have the assets Indiana would prefer, reportedly two first-round picks and a starter, George would be a great fit on the floor.

George would be a strong two-way presence; he’s been named to one of the all-defensive teams three times in his career, who would take some of the scoring burden off Isaiah Thomas. Boston is clearly searching for a superstar — whether George, Jimmy Butler, Gordon Hayward, Blake Griffin or Anthony Davis— and George makes a ton of sense for this team.

On a recent podcast, Wojnarowski said that Houston could be involved in the Chris Paul sweepstakes in a couple of weeks, and the Rockets’ search for another superstar player to go with James Harden reportedly continues with George. Houston could look to acquire PG13 with a package including Indianapolis native Eric Gordon, per Brian Windhorst’s Sunday ESPN Radio show.

Houston has a bevy of young players and flexible contracts to make a trade happen, but George would have to adjust to Mike D’Antoni’s free-flowing offense. Harden had a career-best, and possibly MVP-winning, season as the ball-dominant point guard. Would the Rockets have to adjust their offensive strategy if they were to bring George into the mix? George played on Team USA squads where D’Antoni was an assistant coach, so maybe adjusting to his offense wouldn’t be difficult after all.

Sunday’s report of George not wanting to re-sign with the Pacers was just the beginning. Until George is traded or signed with another team, he’s going to be the newest NBA All-Star driving the ceaseless NBA rumor mill churn forward.