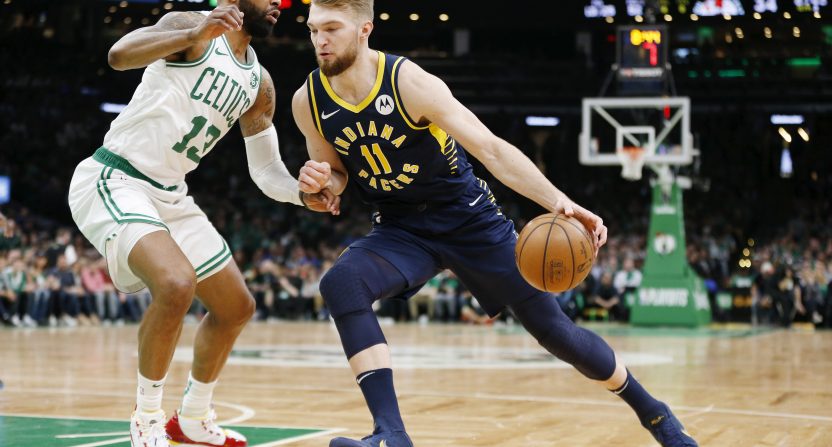 With opening day coming next week, you’d think most teams would have their rosters pretty much set at this point. So it’s kind of interesting that the Indiana Pacers are reportedly shopping center Domantas Sabonis in the wake of extension talks breaking down.

That’s via The Athletic’s Sam Amick.

Sources, at @TheAthletic: One of the NBA's best young big men might be on the move https://t.co/PyZpzOkUZb

The league’s extension deadline for eligible players is Monday, which is one of the reasons for the odd timing. Sabonis is set to hit restricted free agency after this season, and while the Pacers would clearly like to keep him, it’s felt likely for a while that a deal could happen. Not because he’s not talented; assuming Victor Oladipo returns to form, Sabonis is probably one of the best three players on the team. The issue is the third player, Myles Turner, also plays center, and he signed a long-term extension last year.

The Pacers have done a solid job posturing that they plan on playing Turner and Sabonis together, which could probably work okay. Sabonis is a playmaking center who can punish people in the post, grab tons of rebounds, and dominate in pick and roll action; he was runner-up behind Lou Williams for 6th Man of the Year last season. Turner, meanwhile, led the NBA in blocks last year, is vastly improving his pick and roll defense, and shot 39% from three-point range. They’re not strictly redundant players, which makes this even harder; if their skills overlapped more, a trade would be the obvious choice.

Instead, Indiana is looking at the possibility of doing something no team in their market class wants to do: trading away young, talented players of the caliber they’re not likely to be able to find in free agency. The last time that happened was with Paul George, in the deal that brought Sabonis (and Oladipo) to Indiana in the first place.

This report doesn’t necessarily mean a deal is imminent. Indiana has playoff hopes and they have spent the offseason planning for a Sabonis/Turner frontcourt. would probably have to be blown away to make this kind of move on the eve of the season, as would their trade partner. Making a move now would also pretty much guarantee the Pacers would have to target a four, unless they play smaller with either T.J. Warren or Doug McDermott soaking up more minutes there.

And, obviously, the timing is an issue. 2019 draft picks and players that signed recent deals aren’t available yet, and won’t be until midseason, which is also when more teams are likely to be in buy or sell mode. They do still control Sabonis’s rights, as well; restricted free agency isn’t pleasant, but it’s an option. But if the partnership fails and a trade becomes perceived even more inevitable (teams would know the Pacers wouldn’t be matching a massive offer sheet in that case), it’s possible Indiana’s leverage could drop even further.

It’s a tough situation for a smaller market team to be in. Talent is talent, which is why they’ve tried to find a way to pair Sabonis and Turner to begin with, and why they went with their best player available in the draft this summer, even though Goga Bitadze is also a center. It’s not an easy spot, unless a team with a surplus of young wings or a blocked stretch four decides they’re willing to pay for a center.