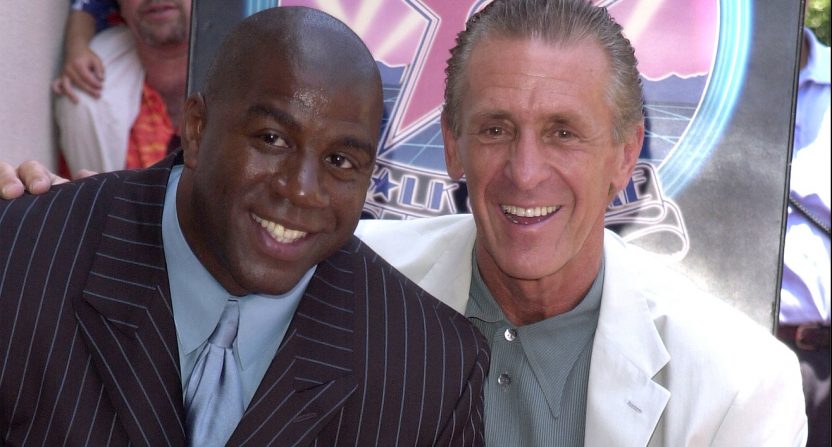 Magic Johnson recently took on the role of general manager of the Los Angeles Lakers after publicly stating his interest in the job. As Magic continues to settle into his new role with the only team he ever played for in the NBA, he has received the public endorsement from his former showtime coach, Pat Riley.

Calling Johnson the smartest player he has ever coached, Riley had nothing but positive things to say about his former star player taking on a GM role in an interview with The Vertical.

“Earvin is a guy who has been a prolific businessman, with his cinemas, Starbucks and other things,” Riley said. “He’s gone into companies and changed management, changed the culture. He’s charismatic, gets up in front of people and puts an immediate face on an organization.”

Few would argue having Magic Johnson involved in the league is a bad thing. Just having his smiling face around the NBA is reason enough to feel good, but can he be a good general manager? That smile can only take you so far, and not every player can end up being a good GM. At least Johnson can always call on his old pal Larry Bird for advice in this department.

In an evolving world of sports falling more and more reliant on analytics, Johnson has admitted he may not be the most analytical GM out there, but Riley says Johnson should not be held too accountable for that minor statement in a world of constant attention and reporting. Had Riley been coming up in the same age, he believes he would have said some things he would end up regretting too.

“I could not be insightful in a 10-second sound bite,” Riley said, referring more to his brief stint as a TV analyst but still driving the point home fairly well. “I couldn’t be critical. I’m glad the people in New York didn’t base their evaluation of me on that. And as far as what I do today, I don’t know what that means.”

As long as Johnson continues to tweet his thoughts to us all, we’ll all be happy.