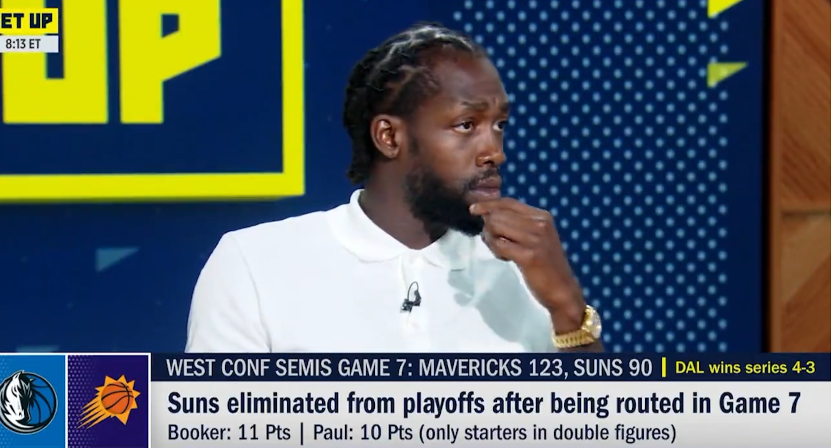 One of the most well-known instigators and trash talkers in the NBA is Minnesota Timberwolves guard Patrick Beverley.

Beverley has been known to get under the skin of many players, but maybe no player has experienced that more than Phoenix Suns star point guard Chris Paul.

The rivalry between the two has been well documented over the years, with Beverley saying previously that it dates all the way back to his high school days.

The Suns played in an elimination game against the Dallas Mavericks on Sunday, and Phoenix came out extremely flat from the start and lost 123-90.

Beverley discussed the Suns’ embarrassing loss Monday morning on both ESPN’s First Take and Get Up, where he blasted Chris Paul for his performance with the series on the line last night.

He had some extremely bold criticism of Paul, saying that the Suns should have benched Paul instead of Deandre Ayton and that he “can’t guard anybody..he’s a cone” as well as adding that he should be getting the same type of criticism as Brooklyn Nets guard Ben Simmons.

"They benched the wrong person. They should've benched Chris."

“CP can’t guard nobody man. Everybody in the NBA know that. … He’s a cone. … Give him the Ben Simmons slander.”

It was certainly a pretty aggressive attack on Paul from Beverley, which had many around the NBA world commenting on Beverley’s harsh critiques.

Patrick Beverley woke up early, pressed his tallest white tee and polished his black Nike Air Force 1’s, then went to the ESPN studio to talk shit about Chris Paul. The commitment to being a hater is truly commendable.

@patbev21 is on the warpath against CP3 😭 https://t.co/KXgyZhygIW

Patrick Beverley woke up at 4:45 am this morning itching to do this https://t.co/xTTIqaZUSf

We typically don’t see media members go after players as hard as Beverley did towards Paul, but considering Beverley is still an active player with a long history with Paul, it makes some sense. And many around the NBA world are applauding Beverley and see him as someone who could be excellent as an NBA analyst once his playing career is done.

Keep @patbev21 on tv the rest of the playoffs

RT if Patrick Beverley should go on more sports shows

Can we just give @patbev21 & @jj_redick their own @ESPNNBA Show.

Patrick Beverley has a future on TV if he wants it. Fits right in with the current media wave. He is killing Chris Paul right now

ESPN better give @patbev21 a massive contract before @NBAonTNT scoops him up. He is already the best analyst on @ESPN.

How Fox Sports gonna be whenever Pat Bev is ready to retire and do TV pic.twitter.com/DrMEqLGiKW

Beverley’s recent appearances on ESPN programming have definitely been a change of pace for the network.

He has always played with an edge to him, and it appears that his style on camera is about as authentic as it gets.

Regardless, it definitely doesn’t look like Beverley and Paul will be squashing their beef anytime soon. And with Beverley set for further ESPN appearances Tuesday, there could be more to come here.