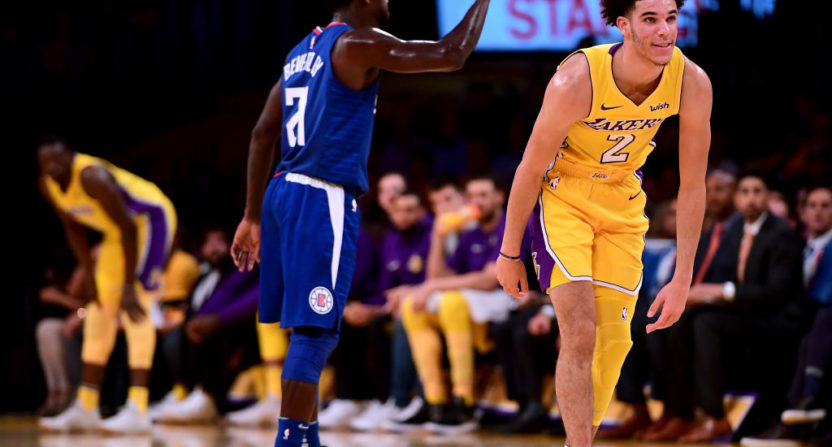 Baseball is unquestionably the sport with the most unwritten rules, but basketball has plenty of its own. NBA players often don’t pick up pressure full-court, they don’t go all out on defense every possession, and they certainly aren’t locked in offensively. That’s because the season is too long to sustain max-effort play, at least among players who get big minutes night after night. Which is why if you’re known as an “effort” player, you’re most likely a role player; coming in and going all out for ten minutes is more doable across a full season.

It’s also why the playoffs pick up in intensity and, normally, entertainment value.

Another reason players generally don’t go full-speed at all times is because there’s not much value to doing it. Everyone in the NBA is, ostensibly, a very good basketball player. Wearing yourself out picking up Chris Paul full-court doesn’t make a whole lot of sense, because 99% of the time, Chris Paul is going to be able to bring it up without turning it over, and he’s also likely going to find a way to exploit the extended defense in the process.

That’s the status quo, and it’s a sort of understood practice around the league, and it’s very funny when players decide to test that.

Patrick Beverley has kind of built a career around testing it, and last night’s Clippers-Lakers game afforded him the ability to do it on a pretty big stage. Making his Clippers debut (he was shipped to LA as part of the Chris Paul trade), Beverley predictably decided to test Lonzo Ball in Ball’s NBA debut. This is going to be a common occurrence, of course; until now, LaVar Ball has been writing checks that his son could cash, both figuratively and literally. Lonzo, though, regardless of how good he could end up being (jury is still out on that) is still just 19, playing now against the best competition he’s faced in games that counts.

So we got things like this, with Beverley crowding Ball as he tried to tuck in his jersey:

And this, where Beverley takes a hard foul at halfcourt, and shakes Lonzo enough that he forgets he can’t go into the backcourt to receive the inbounds pass anymore:

I once went to a Clippers-Pacers game and sat courtside in Indianapolis. It was the night before Thanksgiving in 2009, and both teams were really bad, and it showed; the Pacers ended up winning 86-73. (That box score is filled with some very 2009 NBA names; Sebastian Telfair! Luther head! Troy Murphy!)

But in the fourth quarter, TJ Ford and Baron Davis got tangled up after Ford gave a hard foul, and had to be separated. The entire crowd started booing Baron Davis, who had played okay, but was clearly not really into the game at that point. But you could see him get pissed, and the crowd kept booing, and then Davis hit three straight shots to bring the Clippers back into the game. Just because he had a reason to care!

The worst thing for Lonzo Ball is that it’s not going to get better. LaVar continues to do it, too, going after Patrick Beverley after the game for not having a shoe deal, among other things, which is a perfect example of how LaVar isn’t helping. Lonzo only has his own “shoe” because his family went the vanity press route. But when your kid goes 1-6 from the floor for nine points, that’s what matters. Lonzo himself has said the right things, and said them again after last night’s game, but this is not going to get better, and it’s an example of his dad’s constant need for attention making things a lot harder for Lonzo than they need to be.

LaVar is giving the best basketball players in the world a reason to care about random regular season games. They’re good enough without that.