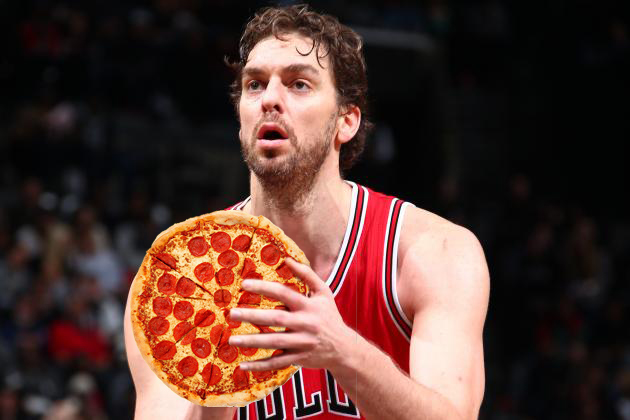 Pau Gasol did an interview with Alex Wong for GQ Magazine and stirred up quite the internet discussion about pizza on Tuesday when he gave a very heated opinion about Chicago pizza.

Wong: What about Chicago-style deep dish pizza?
Gasol: I’ve tried it. I’m not a fan of this deep dish pizza. To me, it’s just a cake of melted cheese. I like the thin-crusted pizzas better.

To be totally honest, Pau isn’t wrong here. He didn’t say the pizza was bad, just that he isn’t a fan. All pizza is good. Some pizza is different than others (and, for some, better or worse).

The deep dish aspect of Chicago pizza allows for more volume to your pie, whether it be cheese or marinara sauce or dough. No matter how much dough you’re talking, that triple threat combination in a round, or sometimes square, shape makes for a pizza, no matter how you spin it.

It’s not like Pau said that Papa John’s was the king of pizza. Now that would be absurd.

This isn’t the first deep-dish debate and it won’t be the last. Most notably, Jon Stewart once gave a pretty fine description of Chicago-style pizza, pointing out problems with the marinara sauce on top of the cheese (which, I’m not a fan of either) and the pillowy nature of the Chicago-style pie.

Of course, it’s worth noting that a Chicago-style deep dish pizza is somewhat of Chicago’s tourist shtick, kind of like the famed Varsity is for Atlanta. Nobody in Atlanta really eats at the Varsity. Tourists think it’s amazing, but the natives don’t care for it, because we know it’s really not all that it’s made up to be. It’s for your relatives that are visiting from out of town. (Ed note: Pat’s and Geno’s in Philly is number on one the tourists love it but locals know better. Still, we all each cheesesteaks. What kind of pizza do real Chicagoans eat?)

Each city in the country has something like that, and I’m buying this as Chicago’s. Because that’s just not normal pizza. You can’t regularly enjoy that cake of cheese with marinara icing.

Like all delicious foods, it’s all about preference, but no, Gasol isn’t wrong in his opinion about melted cheese cake with sauce.