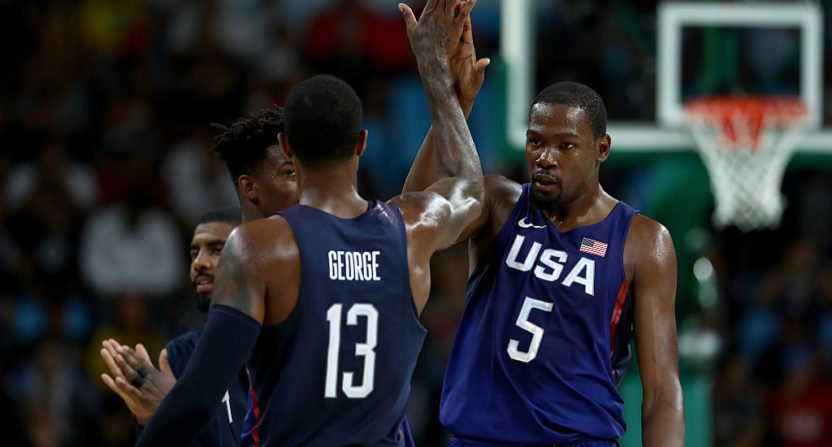 Just because Kevin Durant left Oklahoma City, that doesn’t mean he’s left behind how he feels about it.

Paul George found that out after he was traded to the Thunder by the Indiana Pacers in early July after he said he would opt out of his contract following the 2017-2018 season.

While the chance to play alongside Russell Westbrook must have been appealing, George also finds himself in a new place following seven seasons in the same city. It’s the kind of thing that could be discouraging if you don’t have someone whose opinion you can trust to show you the way. That person, apparently, is former Oklahoma City resident Kevin Durant.

“KD was like, ‘That place will blow you away,'” George told Sports Illustrated. “He told me, ‘They can offer what other teams can’t in terms of the people and the preparation and the facility, down to the chefs and the meals.’ He was pretty high on them. He thought it was a first-class organization in every way.”

Some may scoff at the irony of the situation as Durant was the one who left OKC last year to chase a championship with the Golden State Warriors. But as both players remind us with their moves, sometimes just because you make a business decision it doesn’t mean you won’t miss what you’re leaving behind.

“There’s no right way to handle it. I get the frustration. I get why people are upset. But at the same time, I want the average fan to understand that we only get a small window to play this game, and more than anything, you want to be able to play for a championship. I wanted to bring that to Indiana. I really did. I love Indiana. That will always be a special place for me, and I’m sorry for not holding on. But I wasn’t sure we’d ever get a team together to compete for a championship, and that’s where all this came from.”

Meanwhile, Durant and George continue to build on what’s become of the NBA’s best player appreciations. Durant told reporters earlier this year that George is his favorite player to watch.