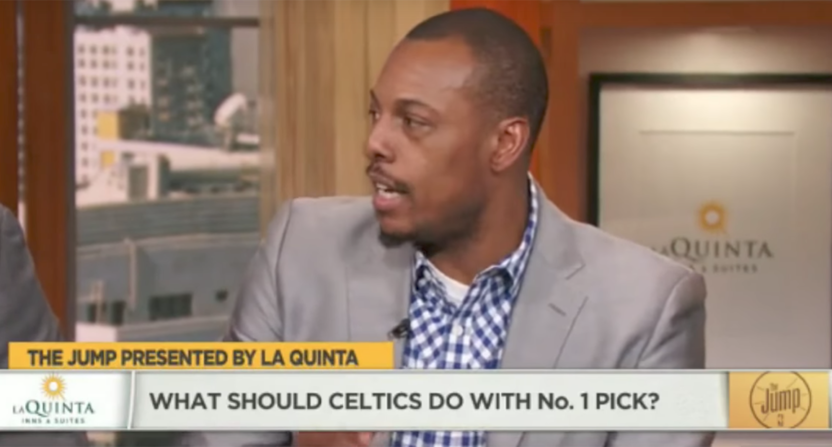 The Celtics have the best problem in the world. They have the No. 1 pick in the 2017 NBA Draft, but as the No. 1 seed in the Eastern Conference this season, they may be better off trading the top pick for an established star who would do more to improve the current roster immediately.

Former Celtics star Paul Pierce (who jokingly took credit for Boston getting the top pick) went on ESPN’s “The Jump” on Wednesday to say he thinks Boston would be wise to trade the pick for someone like Paul George, Jimmy Butler or Gordon Hayward.

“You trade this pick because [Markelle Fultz] cannot help the Celtics get over the top. The window is now. You’re a 50-win team, you’re the No. 1 seed. You have to build on this momentum. If you can acquire a Paul George, a Jimmy Butler, or a Gordon [Hayward] from Utah, you have to do it. … You need these guys. You want to get over the top. Boston doesn’t praise winning the Eastern Conference. They’re going for a championship.”

As Pierce admitted, the Celtics will have a chance at Hayward in free agency this summer. So it’s possible they could get Hayward and Fultz. But free agency does not begin until July 1, nine days after the draft, which means holding onto the pick would require a risk if getting an established star is their main offseason objective.

As ESPN NBA writer Zach Lowe also pointed out on “The Jump,” Boston needs to consider if even adding a player like George, Butler or Hayward to the roster would be enough to knock off LeBron James and the Cavs in the East. Although the Celtics got the No. 1 seed this year, Cleveland absolutely destroyed them Wednesday in Game 1 of the Eastern Conference Finals.

Theoretically, the Celtics will have another great pick in next year’s draft, as they’ll once again get the Nets’ first round pick. So if they trade the No. 1 pick this year for a star wing and still can’t hold a candle to the Cavs in 2017-18, they’d have a second chance to build for the future. But the 2018 draft class should be significantly weaker than 2017’s, although getting the No. 1 pick might mean getting Missouri signee and stud small forward Michael Porter Jr, who could fit even better with the Celtics’ roster than Fultz. But again, there’s a lot of risk and unknowns involved there.

On the flip side, the Celtics could draft Fultz this year and also get a top pick in next year’s draft to build for the future while also keeping a contending roster intact. Even if small forward is a bigger positional need for the Celtics, Fultz still has the skills to make Boston a better team even as a backup point guard.

There are questions as whether the Celtics would even want Fultz considering they already have a MVP candidate at point guard in Isaiah Thomas and a budding shooting guard in Avery Bradley, who put up the best numbers of his seven-year career this season. But both Fultz and Thomas have said they think they could coexist in the same backcourt.

Here’s what Fultz told CSN New England on Tuesday at the draft lottery:

“[Playing on or off the ball] really doesn’t matter to me. I just love the game and I think I’m versatile enough to play the 1 or 2. Whatever a team needs me to do to win, I think I’m capable of doing it.”

Thomas shared a similar sentiment when asked about potentially playing with Fultz in March, from MassLive:

“I can play with anybody,” Thomas said. “I can play off the ball, I can come off screens, I can catch and shoot. So I think that’s, even going back to college, my first couple of years I was off the ball. And then I can play on the ball as well. So a lot of guys can’t do both, but I’m fine with doing both.”

Fultz also addressed the question of receiving fewer minutes playing alongside Thomas and Bradley in Boston than he would as a day-one starter for some of the other teams in the lottery:

Again, this is a great problem for the Celtics to have. But it’s still a problem, and they’ve got five weeks to find a solution.