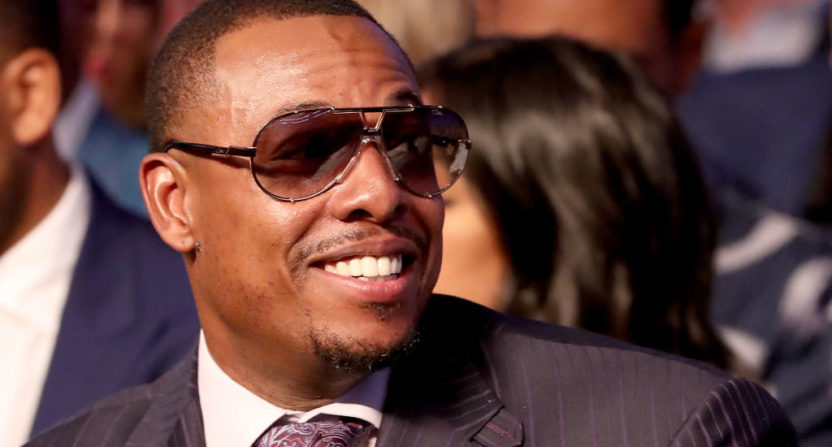 When asked to make a bold prediction on Thursday’s edition of The Jump, the former Boston Celtics star went above and beyond.

“The Oklahoma City Thunder will raise the [Larry O’Brien] Trophy this year.”

Paul Pierce was asked for a ? prediction … and he delivered. pic.twitter.com/ajqR2BFJAc

So, that’s one hell of a take.

The Thunder had a wild offseason that included them acquiring Paul George and Carmelo Anthony in trades. And, they already have last season’s MVP — and this upcoming season’s, according to Pierce — in Russell Westbrook. That’s plenty of starpower and reason for optimism, but we also don’t know how well these guys will play with each other (like, how will Melo handle being the likely third scoring option?), and if they will play enough defense to win playoff basketball.

Oh, and the Warriors and Cavs are still a thing, with the Warriors in the same conference as the Thunder. The latest NBA title odds — according to ESPN — have the Warriors (5-12 odds) and Cavs (4-1) as the clear title favorites, followed by the Celtics (10-1). The Spurs, Rockets, and Thunder all have 16-to-1 odds. Hey, it’s possible, but, the scenarios for the Thunder winning it all likely involve a serious injury to at least one of Steph Curry, Kevin Durant, and LeBron James, along with OKC playing about as well as they’re capable of. Again, it could happen, but it would be stunning and should not at all be predicted.

And Pierce had an even more questionable take the day before. The 10-time All-Star said he would’ve taken Andre Drummond over Anthony Davis in the 2012 NBA Draft.

Jalen Rose’s response: “You’ve been hanging out with that coach with the Miami Dolphins.”

Paul Pierce says he would have taken Andre Drummond over Anthony Davis coming out of college.

Drummond was taken with the No. 9 overall pick of that draft and has been a very good player for the Pistons, but he’s also a limited offensive player and has been as bad as any free-throw shooter in the history of the NBA (example). Davis, on the other hand, is arguably a top-five player in the NBA after being the No. 1 overall pick in 2012.

It’s certainly a good thing for New Orleans that they didn’t listen to Pierce’s advice.