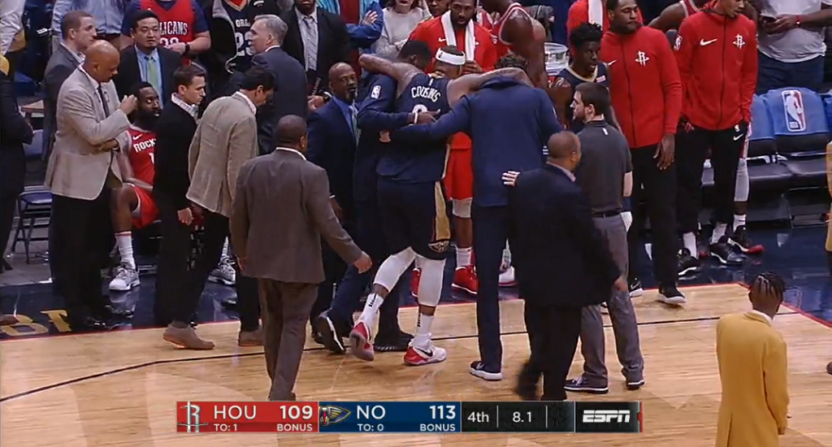 The New Orleans Pelicans extended their winning streak to four games — and have won seven of their last eight — with a 115-113 victory over the Houston Rockets on Friday night. New Orleans is finally starting to look like the team their front office envisioned when they acquired star center DeMarcus Cousins last February to play next to star power forward Anthony Davis.

But, it appears that Cousins suffered a very serious injury in the final seconds of Friday’s win.

ESPN’s Adrian Wojnarowski reports that Cousins has suffered a torn left Achilles that will end his season:

DeMarcus Cousins has suffered a torn left Achilles tendon, league sources tell ESPN. He will miss the rest of the season. The MRI is coming soon, but diagnosis is clear.

The injury happened in the final seconds, when Cousins missed a free throw and went in for the offensive rebound, before going down on the ground in serious pain. Cousins remained down on the ground for over a couple minutes, before being helped off the floor by New Orleans’ players and training staff. He couldn’t put any weight on his left leg as he was taken to the locker room, and the replays immediately made viewers fear that Boogie suffered an Achilles injury, which has unfortunately since been confirmed.

Boogie has formed the lethal frontcourt duo with Anthony Davis that the Pelicans hoped for, which made New Orleans a very dangerous team in the Western Conference. Even if the Pelicans had remained a back-end seed in the Western Conference, they would’ve been a team that nobody wanted to see in the playoffs because of the matchup nightmare Cousins and Davis can cause for teams with frontcourt issues.

Now, it will be difficult for New Orleans (27-21; No. 6 seed) to even make the playoffs. And even if they should do so, they’re not going to last long.

So, this really sucks for everyone involved, but especially Cousins. Even putting aside this season, Achilles injuries have been known to be potentially devastating for an athlete’s long term outlook and we have no idea if Cousins will be the same elite player whenever he can return.

And it’s particularly awful for Boogie when you consider that he’s set to be an unrestricted free agent after this season. He was going to get a massive contract, likely to remain with the Pelicans. Now what kind of contract will he get? Will a team still pay him huge money and take the chance he makes a full recovery to remain the same dominant, explosive center he is today?

All of that remains to be seen, but it’s really lame we have to ask these questions.