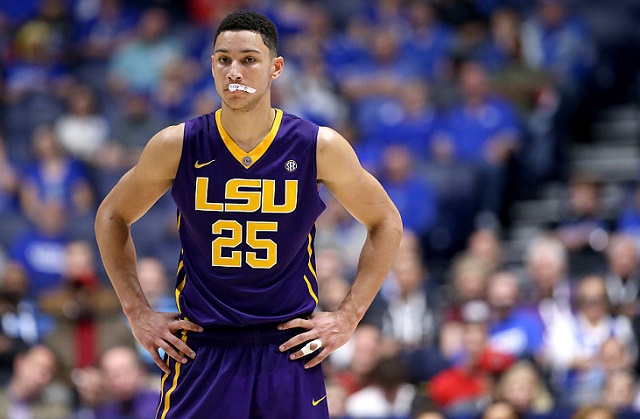 A disclaimer, a reminder or an intervention should be held before next month’s NBA Draft. Warning: first-round picks — even lottery selections — can be like boats: sleek, luxurious and you daydream about all the fun you’re going to have with this new acquisition.

They also can depreciate quickly. Buyer’s remorse sometimes settles in and in a few years you’re often dealing it away, wondering why you made this purchase in the first place.

The Philadelphia 76ers and Los Angeles Lakers will select No. 1 and No. 2, respectively, next month. They have the opportunity to select the two best prospects: Ben Simmons (formerly of LSU) and Brandon Ingram (formerly of Duke).

Professional sports are an amalgamation of the entertainment business and the hope business. Leagues continuously sell the belief that Team X will coach better, play better, draft better than last year. We’re brainwashed.

Nothing highlights the hope business more than college player drafts.

The NFL runs the most popular talent acquisition show, but it takes several good players to have a football good team. MLB is the least heralded, due to the relative anonymity of high school and college athletes. Those players are immediately funneled into the obscurity of the minor leagues. You might not see them in the majors for years.

The NBA is different. It’s a sport where one great player can make a tremendous difference. We’ve seen their faces and immediately recognize Simmons and Ingram because of the popularity of college basketball.

The Sixers (10-72) and Lakers (17-65) will likely be pinning their hopes on Simmons and Ingram. Neither Philadelphia nor Los Angeles has successfully drafted a star player since 1996. Allen Iverson was picked first overall to Philly, L.A. took Kobe Bryant (13th).

As talented as Simmons and Ingram seem to be, what are the chances that both develop into great professionals? Well, based on recent drafts, thinner than LeBron’s hairline.

Since the 1996 NBA draft, there have been 40 players taken with the first two selections. Guess how many times both the No. 1 and No. 2 pick of the same draft became All-Stars?

Once — in 1999. You might remember 1999: Star Wars: Episode I – The Phantom Menace was the highest grossing film and Cher (Cher?, yes Cher) had the top song of the year with “Believe.” (Boy, we had some bad tastes back then).

Elton Brand was the top overall NBA draft pick in 1999, followed by Steve Francis. Brand, 37, is in the latter stages of a solid career. (Raise your hand if you knew he was still in the league in 2015-16 as a member of the Sixers.) The once-electrifying Francis, 39, last appeared in the NBA in 2008 and is retired.

Brand and Francis were good, but neither was transformative.

Using the past two decades as a barometer, the odds favor Philadelphia. Of the 20 players picked No. 1 overall, 12 have become All-Stars. Iverson (’96), Tim Duncan (’97), LeBron James (2003), and Dwight Howard (’04) will be in the Hall of Fame. Duncan is the best player of his generation and James could finish as the greatest in NBA history.

Karl-Anthony Towns (2015) was the NBA Rookie of the Year and was 14th in Player Efficiency Rating overall. Anthony Davis (2012) is a star (highest Player Efficiency Rating in the league in 2014) but Anthony Bennett (2013) is one of the biggest busts in NBA history and the jury’s still out on Andrew Wiggins (2014). Yes, he was the 2015 rookie of the year. But the advanced metrics tell a different narrative.

In Value Over Replacement Player, Wiggins has a two-year total of minus-0.3, according to basketball-reference.com. As a rookie, his VORP of minus-0.2 was one of the worst ever by a rookie of the year winner (No.418 overall among all players). This year, he improved to No. 358 with a minus-0.1. For comparison sakes, Towns was No. 22.

As risky as picking No. 1 can be, it’s better to be in the Sixers’ position than the Lakers’. Shockingly since 1996, only four No. 2 picks have become All-Stars—and none since Kevin Durant in 2007. When you look at recent NBA Draft history, your head might spontaneously combust.

Michael Beasley (2008) loves SpongeBob SquarePants more than basketball. Hasheem Thabeet (2009) is the rare 7-foot-3 human being that no team wants. Evan Turner (2010) thought he could dunk on LeBron.

The biggest news regarding Derrick Williams (2011) involved him being a victim of theft. Michael Kidd-Gilchrist (2012) can’t shoot (he’s 6-for-25 from 3-point range for his career).

Victor Oladipo (2013), Jabari Parker (2014) and D’Angelo Russell (2015) are too young to judge and still developing. But neither of those guys have led their teams to winning records.

Are Simmons, Ingram doomed to disappointing fates? Impossible to predict, but the NBA and its media minions will sell you hope.

If you add Ben Simmons or Brandon Ingram to the Sixers, they immediately become a 16 or even 17-win team.

Lakers fans are happy right now. We'll see how they feel in a year when the Lakers are 20-62, and Brandon Ingram is dating a Kardashian

Go ahead Philadelphia and Los Angeles. Buy that new boat. It could work out. Just don’t act surprised if, in a few years, you’re selling it on eBay.