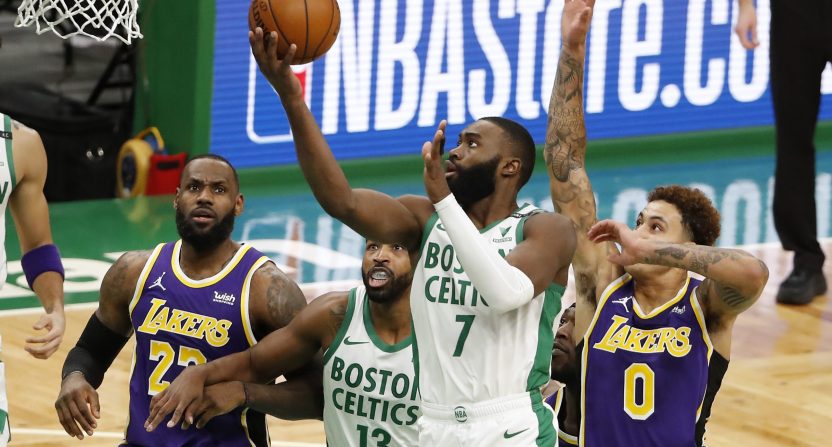 In an NBA season that has been fairly wide open, the cast of players that have a chance at making the 2021 All-Star Game is deep. As many as 20 players in each conference, maybe more, have legitimate cases (it goes without saying that there shouldn’t actually be an All-Star game this year, but the NBA seems oddly determined to play it.)

Again, four of these are self-explanatory, and we have a debate at shooting guard. I decided to classify Brown — who’s having another career season in Boston — as a 2-guard and slid him just slightly ahead of Bradley Beal, who leads the league in scoring. While there has recently been some panic in Boston, Brown has continued to produce. He averages 26 points on 41 percent three-point shooting with elite perimeter defense. That edged out Beal ever so slightly.

To begin, we should highlight the biggest honorable mention: Zach LaVine, who’s averaging 28 points on absurd shooting (61.1 eFG%, 44 percent from three) for the Chicago Bulls. At the end, we ran out of guard spots, and that slid Adebayo in.

LaVine’s Bulls are 11-15, nearly identical to Young’s Hawks. Why Young over LaVine? For one, the Hawks outscore teams by 3.5 points with Young on the floor (and get killed without him), while the Bulls lose LaVine’s minutes by 3.6 points. On-off numbers are fluky, and it’s clear that Atlanta has a better team than Chicago. But with nearly identical usage rates, Young is still far ahead of LaVine as a playmaker, putting up nearly double the assist rate. Neither are good defenders. I gave the slight edge to Young.

Beal, Irving, and Tatum are borderline superstars who are having great seasons. Randle, leading the Knicks into the playoff picture, deserves the All-Star nod. He’s part of a suffocating Tom Thibodeau defense that drives the Knicks’ success. His career season means big leaps in shooting and playmaking: he’s scoring 23 points per game on 40 percent three-point shooting and averaging 5.6 assists. The Knicks win the minutes with him on the court.

Middleton was a no-doubter to me. He averages 20 points on incredible shooting (59 percent eFG%, 44 percent from three) to go along with six assists and only two turnovers. He plays great perimeter defense and initiates a lot of Bucks’ offense on the perimeter, particularly in the clutch. Milwaukee is 16-11, second in the East.

The Heat have underperformed, and it might be reasonable to discount Adebayo’s All-Star case because of that. But he’s basically been a non-shooting version of Randle, with All-NBA level defense added in. Adebayo has a 57 percent eFG% and remains one of the best non-guard passers in the league.

You will not be surprised to learn that the lower-tier of Eastern Conference All-Stars can’t match the West’s. But there are some good candidates here. LaVine, as detailed above, was a narrow miss. Sabonis, one of multiple Pacers who deserve at least a look, also came close. Grant is scoring lots of points on efficient shooting, while defending the other team’s best player every night, for the aimless Pistons. Hayward is the lovable Hornets’ best player — LaMelo Ball and Terry Rozier have been outstanding alongside him.

Vucevic is shooting at a torrid pace on the dilapidated Magic, who have no remaining healthy point guards. Simmons (arguably the league’s best perimeter defender) and Harris both deserve considerable credit for the first-place Sixers. They’re worthy snubs.

These are mostly self-explanatory, except for one decision: Luka Doncic or Damian Lillard for the other starting guard spot? It’s mostly semantics, because they’re both locks anyway, but the starter title carries a certain weight. They have similar cases. Both carry heavy loads for their respective contenders, with those loads increasing due to injuries to a co-star (Kristaps Porzingis in Dallas, CJ McCollum in Portland).

Portland is 16-10, while Dallas is 13-15. The Blazers also just beat the Mavs in a recent game that saw Lillard hit a game-winning three and Doncic miss a potential game-tying three, if that means anything. But Doncic’s load is heavier (his usage rate is much higher), and his work as a distributor, with over nine assists per game, puts him over the top. The two score at almost identical rates at similar efficiency. Defensively, they’re around the same level, with Doncic improving in that area this season.

It’s a toss-up, but Doncic does absolutely everything for that Dallas team, and he’s keeping them afloat. He gets the nod here.

There were some tough decisions here. Let’s start with the clear picks. Paul George has been outstanding for one of the best teams in the league. He’s shooting nearly 48 percent(!) from three with a scorching 62 percent effective field goal percentage. That’s with high-level defense, 5.5 assists per game, and a plus-10 net rating.

Rudy Gobert has arguably been the most impactful player on the Jazz, who have been the best team in the NBA. He’s the favorite for Defensive Player of the Year, regaining his form as the league’s most threatening rim protector. As I wrote a couple weeks ago, he also has been a high-impact offensive player as a screen-setter and rim-roller.

Perhaps Gobert’s most threatening competition for DPOY is Davis, the favorite coming into the season. We haven’t seen the world-beating force that he looked at times in the bubble, but he’s the defensive anchor for the Lakers, who have consistently been the best in the league on that end. His offensive numbers — 22 points and eight rebounds on 55 percent eFG% — are All-Star caliber.

The other spots are tougher. I decided the Jazz deserve three All-Stars, with Mike Conley (currently missing time with a hamstring) and Donovan Mitchell getting in alongside Gobert. Conley is only averaging 16.5 points, but he’s bombing seven threes a game and making 41 percent of them. He orchestrates as the Jazz’s lead ball-handler for long stretches (5.8 assists per game to go with two turnovers) and plays great defense. The Jazz out-score opponents by 17 points per 100 possessions with Conley on the floor.

Mitchell had a slightly slower start to the season, but he’s Utah’s best offensive player, and has a case as their best player. He’s up to nearly 40 percent from three on 8.8 attempts per game. The Jazz as a whole are 22-5 and have an inside track on the top seed overall after Davis’s recent injury.

That leaves De’Aaron Fox, who has impressively kept the Sacramento Kings above water at 12-14. Sacramento can’t defend anybody, but Fox has made sure that they score enough points to stay competitive every night. He’s scoring 23 points per game on fairly efficient shooting (he’s up to 34 percent from three, which you’ll take after a sub-30 percentage last year). That’s with nearly seven assists per game and a batch of heroic performances in the past couple of weeks.

The toughest omissions were Booker, DeRozan, Williamson, and Ingram. All have good cases. But Booker took some time to revv up, and it isn’t easy to differentiate between his and Chris Paul’s contributions to the 17-9 Suns. The turnovers (3.6 per game, compared to 4.3 assists) have been a slight problem for Booker. His recent dominance came very close to pushing him ahead of Fox, though.

DeRozan is averaging 20-7-6 on good shooting, but despite being 16-11, the Spurs are losing the minutes with him on the court. It’s the bench, led by the ageless Patty Mills, that has done a lot of the heavy lifting in San Antonio.

The Pelicans duo have similar cases — good points-per-game and efficiency numbers — but New Orleans is 12th in the West and no one on that team can defend, especially Zion.