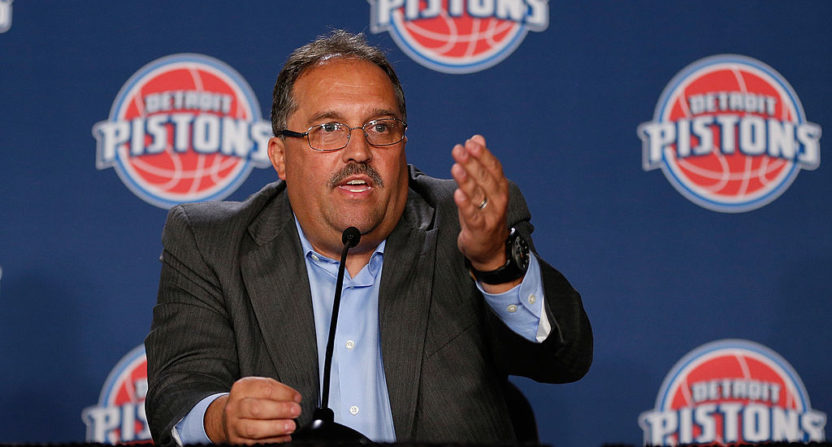 After four years, Stan Van Gundy and the Detroit Pistons are going their separate ways. The Pistons hired Van Gundy as head coach and president of basketball operations back in May 2014, but that partnership had only produced one playoff appearance to date (as an eighth seed swept by the Cleveland Cavaliers in 2016). And there was already discussion that the Pistons might be looking to make a change despite Van Gundy having a year remaining on his contract, as owner Tom Gores hadn’t said anything about Van Gundy’s status since the team’s season ended three weeks ago.

That came to fruition Monday, with ESPN’s Adrian Wojnarowski reporting that the two sides had separated:

Source: Stan Van Gundy and the Pistons have parted ways.

And while there’s still a long way to go before we see what the team’s organizational structure winds up as in a post-Van Gundy era, Wojnarowski adds that TNT and NBA TV analyst Brent Barry is in consideration for a role in the front office:

Sources: One candidate expected to be strongly considered for a role in a revamped Pistons front office — Brent Barry.

Barry has been doing studio work for NBA TV for the past several seasons, and has also been doing play-by-play on Turner Sports’ Players Only NBA broadcasts across NBA TV and TNT. It’s unclear exactly where he’d wind up here, but it’s certainly notable that he’s in consideration by the Pistons. And as ESPN’s Zach Lowe notes, Barry’s previously received some interest from the Warriors:

The Warriors attempted to hire Barry in a scouting position last summer but ran into complications because of his ongoing TV commitments, league sources told ESPN’s Zach Lowe. The two sides even discussed a potential part-time arrangement that would have allowed Barry to fulfill his TNT duties, with the understanding he would come to Golden State full time upon the expiration of his TV contract, but the talks fell through, sources told Lowe.

So, why did Detroit make this move? While the Pistons didn’t do much in the postseason under Van Gundy, and while their records under him were only 32-50, 44-38, 37-45 and 39-43, that was still improvement over where things where when he came in. Before Van Gundy’s hiring, the team’s last five seasons were 27-55, 30-52, 25-41 (lockout-shortened), 29-53 and 29-53, so they managed to crawl at least a bit out of the cellar. And as Vince Ellis of The Detroit Free Press explores, their current roster looks significantly better than the one Van Gundy inherited.

But some big free agent signings (namely Jon Leuer, Boban Marjanovic and Langston Galloway) didn’t pan out, producing cap problems for the team, and injuries to star point guard Reggie Jackson didn’t help either. And the immediate future doesn’t look too bright, as the Pistons’ first-round pick this year belongs to the Los Angeles Clippers (thanks to January’s Blake Griffin trade) unless it winds up in the top three, and there’s only a 2.5 percent chance of that.

The Griffin trade perhaps shows some issues with where the Pistons are, and with what it’s like to be in the NBA’s middle class. They made that move when they were only three games out of a playoff spot, and they finished only four games out, but it wasn’t enough to push them into the postseason. And while it’s not a deal just for one year (Griffin is under contract through 2020), this team as currently constructed could possibly slide into the playoffs with some improvement, but they seem a long way from a championship or even a deep playoff run. Stranger things have happened, but they don’t look like a team immediately poised to contend.

And while trading away picks and other pieces for current roster improvement has some merit, it’s questionable how much that’s worth it when the improvement isn’t enough to make you into a real contender, especially as it means you’re less likely to be able to help yourself through the draft. The Pistons have a nicer roster than many teams, especially with Griffin and Andre Drummond (who said on Instagram after the news that he wasn’t going anywhere) both signed through 2020, but they also have plenty of challenges to address.  But there’s no easy answer the other way, either; blowing it all up and tanking for high draft picks may have worked for the Sixers, but there have been many teams that hasn’t worked for, and that kind of strategy leads to plenty of immediate problems (less fan excitement, ticket sales and ratings in non-competitive seasons) with only the potential of better days down the road.

It’s quite tough to be an NBA team currently outside the realm of contention, and this move shows that. Van Gundy was able to make the team better during his tenure, but he wasn’t able to make them good enough to save his job. We’ll see what approach the next coaching staff and front office take, and if they can do better.