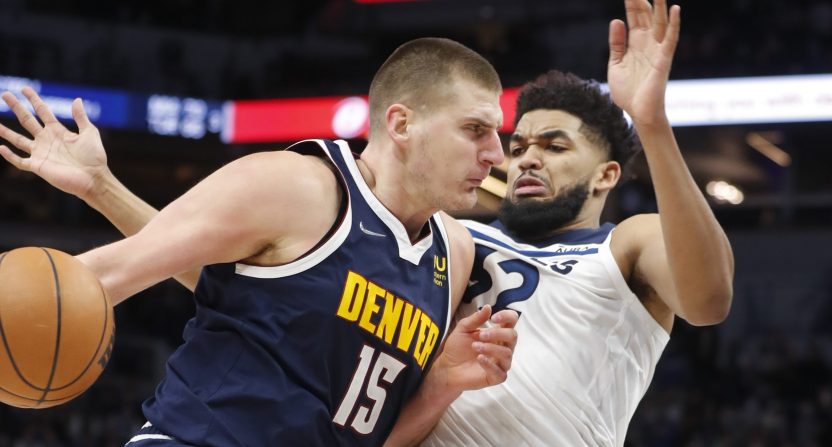 In the middle of the Western Conference, four teams sit within four games of each other, apart from the established top three and the squabbling group of play-in squads. All of them are going to be relevant in the playoffs, assuming whoever finishes seventh survives the play-in tournament.

Let’s take a brief look at each of them, with a focus on their strengths and weaknesses in the playoffs:

Playoff strengths: Donovan Mitchell is an alpha-scorer who has proven that he can raise his level in the playoffs. Every team needs that type of star to have success in the playoff environment.

As ever, the Jazz are flush with shooting and playmaking. In Rudy Gobert, they have the league’s best rim protector, who eats up shots at the rim and dominates switches.

Playoff weaknesses: They’ve proven to have many weaknesses over the years, and it’s not clear that those have been solved. I’ve written about their perimeter defense problem, which limits Gobert’s playoff impact. Bojan Bogdanovic and Mike Conley are a year older.

They often need Jordan Clarkson’s shot-creation off the bench, but Clarkson sometimes chucks bad shots and misses too many. He is a major detractor on defense and struggles to survive on that end. They’re better when Clarkson is playable. With Bogdanovic increasingly looking his age, they might need Clarkson more this year.

One more thing: Can Gobert take advantage of switches and small lineups offensively? They could use some deep-post seals and the occasional hook shot.

Playoff strengths: Luka Doncic is an absurd playoff performer. He does absolutely everything and gives you a chance to win.

Dallas plays great team defense. They’re versatile with schemes and employ multiple talented wing defenders who can guard the league’s stars. Additionally, they have more playmaking on offense than they used to, which should lessen Doncic’s burden. They can play small lineups, which have proven to be more useful in the postseason.

Playoff weaknesses: They have no second star beyond Doncic. Solo-star teams need some breaks to make it far in the playoffs. Spencer Dinwiddie has been a bricky three-point shooter throughout his career and is prone to low-efficiency performances.

Their size on defense could prove a weakness, especially if they face Nikola Jokic. They struggle with rim protection. I also have concerns about their depth; will Maxi Kleber regain his confidence from deep?

Playoff strengths: Nikola Jokic is a one-man shot creator with counters for everything. The Nuggets, with Jokic at the helm, are championship contenders if Jamal Murray and Michael Porter Jr. are playing. Murray, as we learned in 2020, can light it up in the playoffs. Porter provides crucial three-point shooting.

Denver has multiple quality wing players with playoff experience who can shoot, cut, and defend. Jeff Green, JaMychal Green, Will Barton, and Aaron Gordon are useful players around Jokic. DeMarcus Cousins has given them quality backup center minutes. Regardless of health, Jokic gives them a shot against everybody.

Playoff weaknesses: Health, obviously, is the biggest concern. Murray hasn’t played in over a year. Porter played a few games at the beginning of the year and, marred by a back injury, shot very poorly. Even if they play, they will likely not be at one hundred percent.

If one or both of them aren’t around, the Nuggets are a one-star team with limitations. They don’t have great ball-handlers around Jokic. They’ve relied a lot on Bones Hyland for perimeter shot-creation; Hyland is a confident but streaky rookie who struggles on defense. Guard is a weak spot.

Playoff strengths: Minnesota has three players, in Karl Anthony-Towns, D’Angelo Russell, and Anthony Edwards, who can reach a star level on offense. They can put the ball in the hoop. Towns is a ruthlessly efficient scorer.

They have great wing defense in Jarred Vanderbilt and Jaden McDaniels. They’re a balanced team that plays well together.

Playoff weaknesses: They don’t have much experience in the pressure-cooker that is the playoffs. Towns’s involvement can wane, in part due to the playmaking weaknesses of Edwards and Russell. The Wolves need Edwards and Russell to score efficiently and survive on defense.

Vanderbilt and McDaniels are not great shooters, which will cramp spacing. Depth could be an issue, depending on the streaky shooting of Malik Beasley. The Wolves are starved for players who are pluses on both ends.

As their records show, these are all quality teams. They have star players who can carry their teams to wins. They’re much stronger than any of the teams below them.

But I don’t see a championship contender here, with one exception: the fully healthy Nuggets. I doubt that we’ll see that version of Denver in this year’s playoffs. If we do, though, they can beat any team in the league.