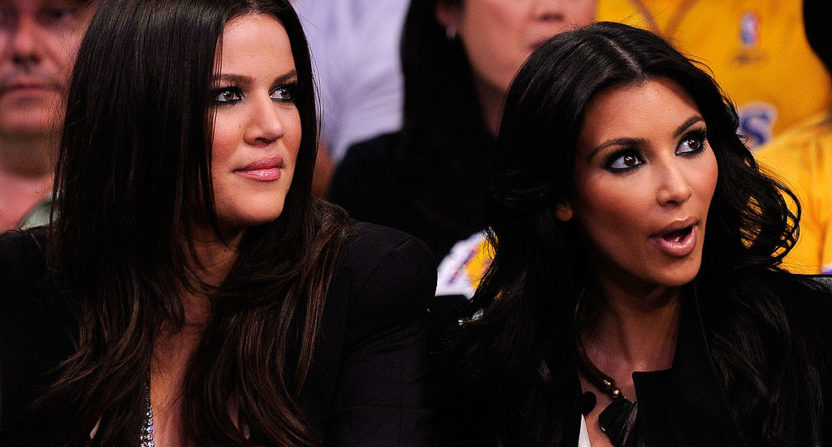 Last week, the Charlotte Observer published a profile of former North Carolina basketball star Rashad McCants, who lasted only five season in the NBA after being picked No. 14 in the draft and is now reduced to competing in Ice Cube’s BIG3 tournament.

The Observer’s piece included one particularly eye-catching quote from McCants:

But McCants’ biggest regret was his highly-publicized relationship with reality TV star Khloe Kardashian late in his career, which he said gave people an opportunity to doubt his commitment to the NBA.

McCants made $7,581,406 in his NBA career, so he’s basically saying his relationship with Khloe Kardashian cost him more than $50 million, at least.

McCants has backed off his comments slightly since that article ran—it wasn’t specifically Khloe’s fault, as “anyone in a public light” would have apparently caused his career to tank—but he nonetheless fits among the long line of athletes who have blamed women (particularly Kardashians) for their failures.

The idea that women, particularly famous ones, are trouble for serious athletes is not new. You hear it every time some old-timer warns young players to stay away from so-called distractions like drugs, alcohol and women, as if X chromosomes have addictive properties. You heard it from Skip Bayless and others when Tony Romo was dating Jessica Simpson. You heard it when Matt Kemp had a bad season while seeing Rihanna. You can see it in this preposterous listicle of “7 MLB Stars Who Shouldn’t Date Celebrities.”

And you hear it particularly loudly when it comes to the Kardashians, several of whom have a history of messing around with athletes. Google “Kardashian Curse,” and you’ll find hundreds of articles, many from reputable publications, explaining how Kim, Khloe, Kylie or Kendall has doomed a man’s career. Sometimes the argument is presented tastefully and sometimes it’s presented crudely, but the crux is always the same: Those no-good Kardashians are ruining careers left and right, and men who go near them must be diligent, lest they succumb to their destructive ways.

But what if—and this may seem radical—it wasn’t the Kardashians who caused Kris Humphries to miss 45 percent of his shots, Reggie Bush to average less than four yards per carry or James Harden to feud with Dwight Howard? What if the failures of those men actually owed to the shortcomings of… the men themselves?

Now sure, not every athlete is cut out for a high-profile celebrity relationship. Maybe fending off paparazzi can be disorienting enough to affect job performance. But as far as we know, no one put a gun to these dudes’ heads and forced them to date someone whose name starts with K. Blaming the Kardashians, or any other women, for two-sided relationships between adults makes them seem like evil temptresses out to sabotage unsuspecting men for the sport of it. And it reinforces a view of women as pernicious figures to be regarded with caution.

If an athlete can’t handle dating a celebrity and also doing his job, that is his problem. Re-directing blame for his performance to a woman makes him look petty, unaccountable and a little bit pathetic.

So hey, Rashad McCants, you averaged an inefficient 10 points per game while failing to contribute in any other aspect of the game and developing a reputation as a locker-room headache. Khloe Kardashian is not the reason NBA teams stayed away from you.