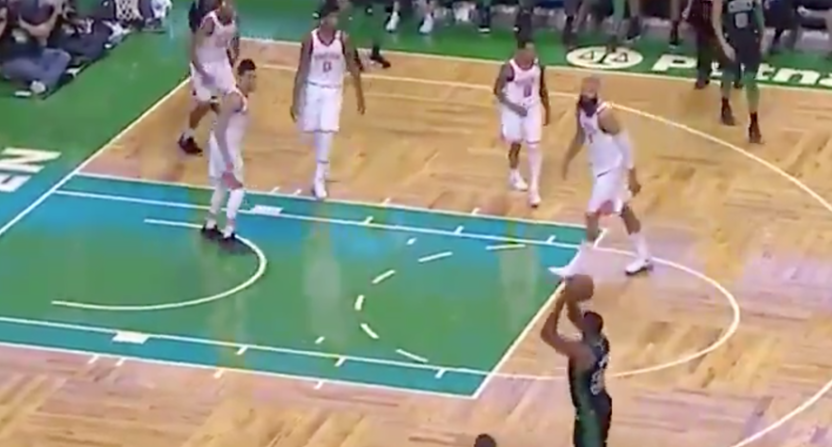 The Phoenix Suns are not very good. They currently stand 8-16, fourth-worst in the Western Conference and sixth worst in the NBA overall. And although the Suns’ offense is far from elite, their biggest problem is on defense, where they rank dead last in both opponents’ points per game and defensive rating.

That defensive ineptitude was on display quite vividly in the third quarter of a close game against the Celtics on Saturday, when the Suns submitted maybe the worst defensive possession of all time.

Let’s run through some of the issues here, which begin with a miscommunication between Devin Booker and T.J. Warren over who should guard cutter Terry Rozier. Both Suns defenders both follow Rozier, leaving Marcus Smart wide open. Booker then fails to even half-heartedly close out on Smart’s 3-point attempt, which becomes costly when the shot misses and bounces right back to the Celtics guard. Booker, Tyler Ulis and Tyson Chandler all then decline to move toward Smart as he lines up his second shot, but Warren takes a couple steps in Smart’s direction in one of the most futile closeouts of all-time. Unfortunately, Warren’s decision to kinda sorta play defense leaves Jayson Tatum entire un-boxed. In fact, not a single Phoenix player boxes out a single Boston player.

As it turned out, Smart missed again, and the Suns’ collective disregard for boxing out led to Tatum deflecting the ball toward the corner, where Al Horford gathered it and sunk an open 3. Somehow this was infuriating to Booker, who moved barely five feet over the entire play (but did score 38 on the day).

Maybe the craziest part of this disaster is that the game wasn’t even a blowout when the Suns gave up on defense. In fact, the Suns actually had a 2-point lead before Horford’s shot. Boston ended up winning by five points, and it’s not too much of a stretch to say Phoenix’s disinterest in closing out or boxing out was a difference.