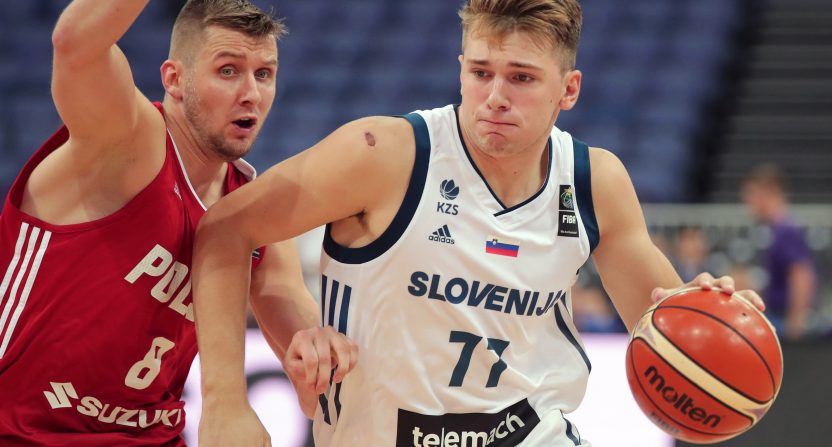 Typically, NBA draft prospects have almost zero leverage in determining where they will start their careers. No matter what they might secretly or not-so-secretly hope, players entering the NBA (and the NFL) must pretty much go where they’re told. If they’re drafted by Minnesota, they have to play in Minnesota, whether or not they like the cold.

Unless, that is, they’re Slovenian sensation Luka Doncic.

Doncic, who is projected as the first or second pick in the June draft, said Thursday at a press conference at the Euroleague Final Four that he has not decided whether to leave Real Madrid for the NBA.

“Ι’m not sure if these are the last two games [in EuroLeague],” Doncic said, according to Eurohoops.net. “We have yet to make this decision. Perhaps after the season,”

Now, it’s entirely possible that Doncic was simply saying this because it’s the “right” thing to say before your team plays a big game. But it’s also possible that the 19-year-old is trying to exert some leverage over the draft process. If he maintains throughout the draft process that he would be perfectly content to stay with Real Madrid for another year or two, he can deter some teams from drafting him, while offering assurances to the ones he actually wants to play for. Then, he can at least partially control his own destiny in a way most prospects cannot.

Naturally, Doncic’s comment Thursday has prompted NBA fans coast-to-coast to speculate about where Doncic does and doesn’t want to play. This is silly, given that we have no idea what Doncic is and isn’t looking for in an NBA franchise. What’s less silly is the idea that Doncic could be looking for something specific in an NBA franchise and might be willing to pull some shenanigans to wind up in his desired situation.

Ultimately, the odds are that nothing comes of this, that Doncic gets picked near the top of the draft and happily trots off to Phoenix or Sacramento without a (public) complaint. But leverage is hard to come by in the draft process, and if Doncic can snag some by hemming and hawing in the media about his desire to come over, more power to him.