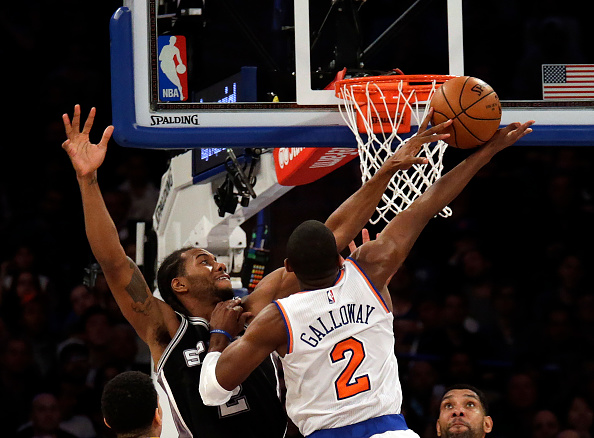 Every week at The Comeback we look to rank some of the best players, shots, games and teams in the NBA. With 2015 coming to a close, most people look forward to the new year for something positive, but in most cases, let’s be honest, those hopes and resolutions come from wanting to forget something bad that happened in the current year. With that, we thought we’d rank the best (and worst) NBA blocks of the season. Time to remember and forget!

The block doesn’t get enough love in the NBA. It, along with assists, is somehow relegated to second-tier status in terms of exciting plays, with three-pointers and dunks haughtily occupying the first tier. This is unfair, because an exquisite, well-executed block can be just as thrilling and invigorating as any alley-oop or deep three. For proof, look no further than these top blocks from the current NBA season.

Look, if this had been called a clean block, as it should have been, and not a foul, this would probably be number one. Unfortunately for us and Draymond, it was ruled a foul.

Vince Carter blocked by the rim

Time is a cruel, cruel thing.

There has never, in the history of sports, been an easier rejection than this.

Kevin Durant has a wingspan of approximately 12 feet. It is nearly impossible to block his shot. We say nearly because here is Kawhi Leonard, reigning defensive player of the year, casually swatting Durant as if it’s no great difficulty. It’s the hands, you see. Durant’s wingspan may be akin to a pterodactyl, but Leonard’s hands are the size of an overgrown bear’s paw. Of course he has terrific defensive instincts and outstanding timing, yet it’s those massive mitts that allow him to harness those other strengths to their utmost effect.

Even though Chris Bosh’s defense is perpetually and criminally underrated, it’s fair to say Bosh has never been an elite shot-blocker. Yet, as Gordon Hayward learned, that doesn’t mean Bosh can’t swat with the best of them. The stuffed dunk is among the NBA’s greatest varieties of blocks. It’s the ultimate test of two forces colliding, and seeing which one will ultimately give way to the other.

This block happened within the first few weeks of the season, when Derrick Williams tried to fool everyone into thinking he had actually become a good player. Few bought the ruse, but there moments, even stretches, when it was really hard not to believe him: case in point, this stunning rejection. Williams knows he’s going to block the shot the second he crosses the half court line. It doesn’t matter that RJ Hunter didn’t even have the ball, Williams just knew that whomever was going to take the shot, he was in perfect position to swat it.

The block itself is vicious and stunning, everything you want in a highlight-worthy denial. What makes it even better is it’s fundamentally sound: Williams kept the ball inbounds and deflected it to a teammate.

Whereas Derrick Williams’ block was all violence and fury, there’s something heroic and graceful about Wall’s block. He does not explode to meet Lin’s shot, he soars, and much like in an action movie, it is with every ounce of effort he can muster at the very last second that he’s able to alter the ball’s course. His reaction afterwards, a mix of relief and swagger, is the perfect end to the sequence.

Blake Griffin is one of the strongest players at his position, if not in the NBA. There is so much force, momentum and strength behind his dunks that it’s tough to imagine anyone stopping him. That’s why, time and again, anyone who’s dared to get in his way gets put on a poster. So when Festus Ezeli comes along and completely arrests Griffin’s momentum, it’s jarring to say the least. Sure, Ezeli is strong, but strong enough to stop a full-speed Griffin? Before this moment, it would have seemed unthinkable. To tell the truth, it still does, even though there’s evidence before us to prove us wrong.

A lot of pleasant movie surprises in this first half of the year.

A lot of pleasant movie surprises in this first half of the year.