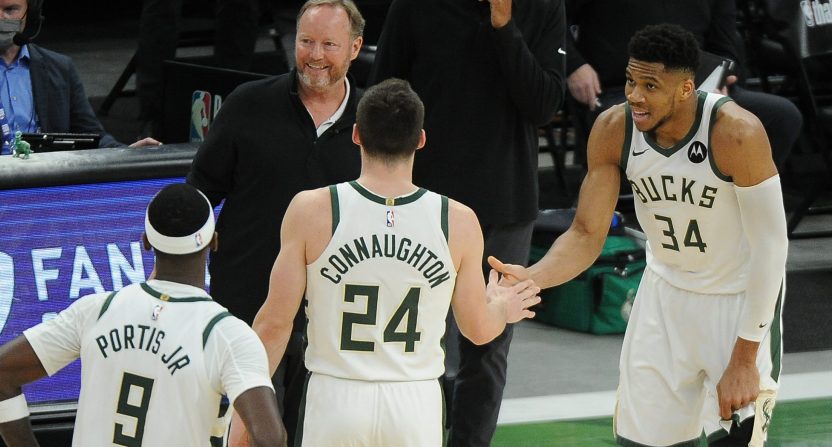 Imagine you’re Mike Budenholzer. The Milwaukee Bucks just completed a first-round sweep of a team that played for a championship last year. Instead of experiencing joy, you’re probably still nervous.

Welcome to Budenholzer’s world. As impressive as Milwaukee looked against the Miami Heat, that doesn’t come close to living up to expectations. The Bucks are built to compete for a title, and if they don’t reach the NBA Finals, Budenholzer might be gone.

Shams Charania and Sam Amick of The Athletic have already reported that Budenholzer needs to at least make the Eastern Conference to keep his job.

Budenholzer has a year left on a four-year contract. It seems unlikely that he would coach the 2021-22 season as a lame duck. Bucks management will likely either extend him or make a clean break in the offseason. Hitting the reset button might make sense. Milwaukee needs to maximize its talent while Giannis Antetokounmpo is in his prime.

Budenholzer has been entrusted with one of the most valuable things a coach can have: a young transcendent superstar (Antetokounmpo). With that responsibility comes massive expectations. Budenholzer was hired to help the Bucks take the next step after the Jason Kidd Experience. His tenure has been marked by great regular-season success followed by postseason disappointments.

Twice the Bucks have been the No. 1 seed. Twice they have been upset. In 2019, they were vanquished in the Eastern Conference Finals by the eventual champion Toronto Raptors in six games. No shame in that. However, last season, Milwaukee (56-17) was by far the best team in the league. But they were dismantled by the No. 5 seed Miami Heat in the conference semifinals in five games. A lot of shame in that.

Now, losing against the Brooklyn Nets would be understandable. Kevin Durant, James Harden, and Kyrie Irving key an overwhelming offense, and the Bucks will miss the defense of Donte DiVincenzo (season-ending ankle injury). But this has the potential to be a great series. Bill Simmons argued on The Bill Simmons Podcast that this might be a matchup of the two best teams in the NBA. He equated it to the 2007 Western Conference semifinals between the San Antonio Spurs and Phoenix Suns, who were clearly better than everyone else.

Durant vs Giannis.
Middleton vs Harden.
Jrue vs Kyrie.

It’s a Finals series in the second round. pic.twitter.com/8z9OP80xFp

It will be interesting to see how Bucks management views the series. If Milwaukee at least takes Brooklyn to seven games, maybe they’re more inclined to stick with Budenholzer rather than have Antetokounmpo play for his fourth coach in nine seasons. However, if Brooklyn rolls, maybe it is time to go with a different, younger, fresher approach.

In the NBA, a coach’s voice and strategies can get stale.

Fairly or not, Budenholzer has the reputation of a guy who coaches the regular season as same as the playoffs. That can be tough to shake. NBA coaches are defined by postseason success, and Budenholzer’s perceived reluctance to make adjustments only makes this worse.

The good news is that this team appears better suited for a long playoff run. Antetokounmpo signed a supermax contract extension last winter, so there’s no longer the distraction of him leaving via free agency. Plus, Milwaukee traded for guard Jrue Holiday. And so far, that addition has paid big dividends.

Many people questioned the Bucks trading away a pair of first-round picks and Eric Bledsoe. Jrue Holiday was a good veteran guard, but he was never regarded as a difference-maker. Oh, what a difference he’s made so far for Milwaukee.

Against the Heat, Holiday had an absurd plus/minus of plus-98. In Game 3 alone, he was plus-41, which according to StatMuse was the highest plus/minus by a Bucks player in a playoff game since 1997.

Credit Budenholzer. That’s not always a seamless fit considering the Bucks already have All Stars in Khris Middleton and Antetokounmpo. When your third-best player plays like your best player, that leads to a first-round sweep.

And even with Holiday missing three weeks due to the league’s health and safety protocols, the Bucks (46-26) still finished with the third-best record in the East and the second-best scoring margin in the NBA (+6.5).

If Budenholzer makes it to the NBA Finals, many will owe him an apology. We’ve held his 36-32 playoff record against him. Budenholzer once looked like a rising star in the profession. The longtime Gregg Popovich assistant landed his first head coaching job with the Atlanta Hawks in 2013. By his second season, he guided them to a surprising 60-22 record. They reached the 2015 Eastern Conference Finals, but were swept by the LeBron James and Cleveland Cavaliers.

After that, the team regressed. Budenholzer was fired after Atlanta missed the 2018 playoffs. The following season, Milwaukee hired him.

Budenholzer is a two-time NBA Coach of the Year. To put that in perspective, Popovich has won that award three times and Phil Jackson once.

But Popovich and Jackson did their best work in the playoffs. Budenholzer needs to do the same to keep his job.