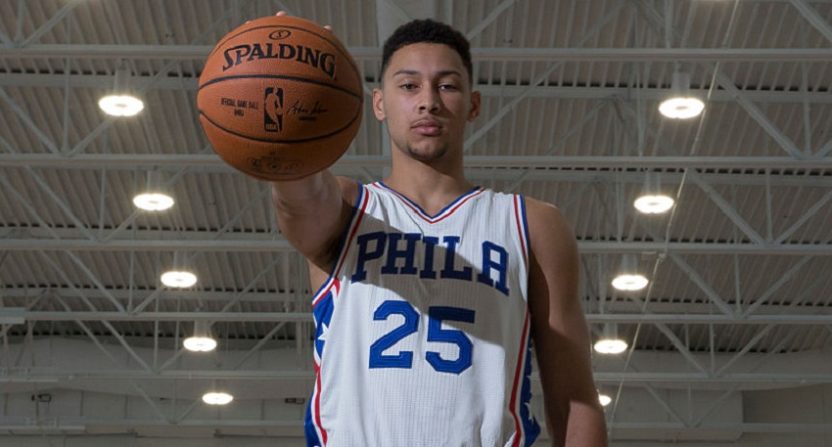 It’s been a long and convoluted road back to respectability for the Philadelphia 76ers.

In 2013, Sam Hinkie was hired as the general manager of the franchise, and the Sixers narrowly missed the postseason at the back-end of his first couple months. That was the most recent year of 30-plus wins for Philadelphia.

The team won less than 20 games each season from 2013-14 through 2015-16. During that time, Hinkie traded veteran asset after veteran asset in exchange for a mounting collection of draft picks. Not only were lottery picks acquired. But in many cases, those selections were jettisoned for even more potential lottery picks.

Point guard Michael Carter-Williams was the NBA Rookie of the Year in 2014, yet was playing elsewhere by 2015. Nerlens Noel was acquired from New Orleans after the Pelicans picked him sixth in 2013, and was traded for a 2017 first-rounder this past February. A long list of other players from Jrue Holliday, Thaddeus Young and Evan Turner, to Spencer Hawes, Henry Sims, Javale McGeee and more have been acquired, shipped out or both in the last four years.

But now, as you’ve probably heard, the assets are starting to turn into tangible pieces that can equate to wins in the short-term (and long-term too, of course).

Hinkie implored Sixers fans to “Trust the Process” while he wheeled-and-dealed through two whole seasons. Fans bought in, and now they’ll reap the benefits of the countless maneuvers — even though Hinkie, ironically, will not. The Process, it turns out, worked. But the architect of it all was never given enough time to see it all through.

When you look at the current 76ers roster, you can see how Hinkie’s vision took shape for Philadelphia management, but without giving the young GM credit for his work. Joel Embiid, Robert Covington, Jahlil Okafor, Dario Saric, Ben Simmons and Nik Stauskas are all rising talents in the league. And they’re all on this roster for at least a couple years. The one glaring weakness missing in that group is a point guard. But luckily, they’ll be able to choose one this year in Markelle Fultz.

The No. 1 pick, of course, was acquired by way of another Hinkie asset. Philly moved up from No. 5 to No. 3 by way of a conditional selection from the Kings. That third pick, plus a future conditional from the Lakers/Kings were all provided by Hinkie maneuvers.

That’s what The Process has wrought so far. But this season, we’ll get to see what it’s really capable of. Should the 76ers’ core roster stay healthy and perhaps utilize the copious cap room it has to play with, you will see this Philadelphia team in the playoffs in 2018.

And why not? Youth? Inexperience? Veterans teams elsewhere in the conference?

Assuming that Cleveland, Boston, Milwaukee, Washington and Atlanta are locked into playoff spots, that leaves three more Eastern Conference bids up for grabs. You can be nice and give another lock to Toronto, even if they lose Kyle Lowry. But the other teams in the East?

So with all of those situations considered, is it really that farfetched for Philadelphia to jump from 28 wins to the 41 or so needed?

Simmons didn’t play last year. Fultz is a new addition. A healthier Embiid is a better Embiid. This young group has also had time all offseason to get a better feel for playing on the same team as one another. Even if you doubt Jahlil Okafor, he could very well be traded for a better veteran piece that fits this roster’s needs more.

With the NBA Draft this Thursday, there’s still a whole lot left to sort out during an already wild NBA offseason. But as you’re examining the mover and shakers, and decoding who’s playoff-bound next year, it would be foolish to skip over the 76ers. This is a club that’s the envy of much of the league from a roster construction standpoint. AND Philadelphia also has the assets to keep building for as along as they’d like.

For awhile The Process was decried as faulty, because the wins weren’t coming. The 2017-18 is the first real chance for an on-court proof of concept, however. With some upheaval in the East, it seems there’s every reason to believe The Process will result in The Playoffs come next spring.