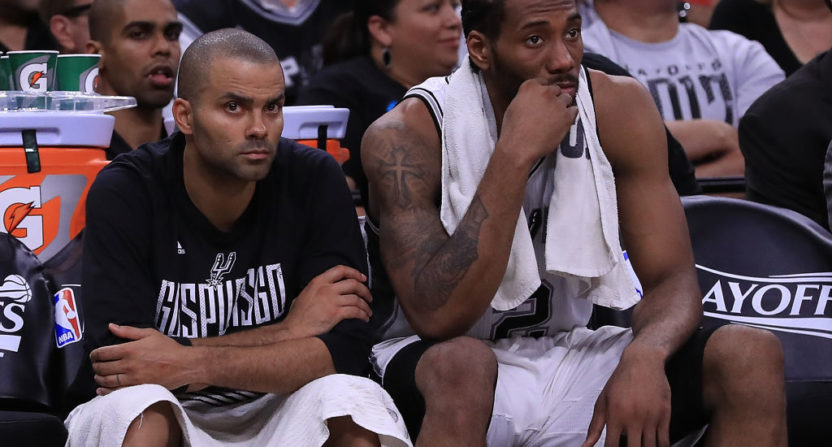 NBA commissioner Adam Silver has made it no secret he feels something needs to be done to discourage NBA teams from resting healthy players as often as they have in recent years. One proposal on the table could see the commissioner gain the power to fine teams thought to be resting players too often.

According to Adrian Wojnarowski of ESPN, the focus of the proposal would address nationally televised games, which incidentally are the games that showcase the NBA product on the biggest stage. It makes perfect sense for the NBA to want its top players in nationally televised games, yet coaches and players care more about being in the best possible shape for what they hope will be a deep playoff run, which is why teams like the San Antonio Spurs and Cleveland Cavaliers have become known for resting key players on a somewhat regularly frustrating schedule for fans.

How exactly would the NBA determine when a fine would be appropriate? According to Wojnarowski, the “proposed guidelines for resting players will encourage teams to sit healthy players for home rather than away games, and discourage the practice during nationally televised games.”

This is a concern that supposedly would help to fix two problems for the league. First, it would increase the chances the league’s star players are playing in marquee matchups for TV. Second, it helps the fans who only get one chance to see LeBron James or Kevin Durant come to town one game a year not be disappointed seeing them on the bench after shelling out hundreds of dollars for tickets to the game. Instead, the home fans will have to run that risk instead, at least more frequently.

In theory, it’s not a proposal, but if you think this is going to solve the supposed problem, think again. Unless the league is physically examining each player through an independent medical expert, then who is to say players cannot be labeled with some ridiculous and vague injury that requires a night of rest?

The proposal is now up for review by the NBA’s board of governors, who will vote on whether or not to grant Silver the ability to fine teams. If it passes, we’ll see how the reaction from the coaches and players around the league goes.

The board of governors will also address another potential problem the league has had no answers for; tanking games. A proposal to level the playing field with the odds of getting the top pick in the NBA Draft would change the percentages teams with the worst records will have for the top pick. This would, in theory, discourage teams from making blatant attempts to tank in a season to increase the odds of landing the number one overall pick.

For example, the three worst teams currently have a 25 percent, 19.9 percent and 15.6 percent chance of winning the No. 1 overall pick, respectively. Under the new plan, those teams would each have a 14 percent chance, league sources said, and the odds for ensuring teams would drop incrementally by a percentage point or two.

Teams have tanked for years in the NBA, but the Philadelphia 76ers took it to a new extreme in recent years, asking fans to Trust The Process. In the last two seasons, the Sixers have landed the top pick in the draft, and Joel Embiid would have been a potential No. 1 pick if he was healthy when he entered the draft. Had these changes been in play, who knows how those drafts would have gone down for the Sixers.

Teams may have to develop another process to trust if the NBA Draft lottery procedures are amended. Any changes would be made for the 20198 NBA Draft, so teams can still tank for at least one more year.