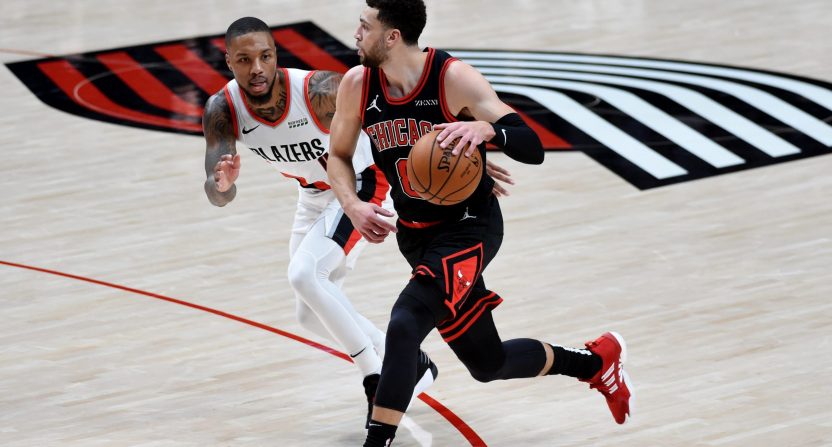 Roughly a month into the 2020-21 NBA season, let’s take a look at some pressing questions and storylines that will affect this year’s playoff races:

Another stampede of Trail Blazers injuries

For the second year in a row, the Portland Trail Blazers are getting hit hard by injuries to their most important players. Oft-injured power forward Zach Collins went down in late December with ankle surgery. Jusuf Nurkic recently fractured a wrist and will be out for at least six weeks. CJ McCollum, after a scorching start to the season, went down with a foot injury and will be re-evaluated in a month.

They received deserved praise for a successful offseason, but the team is now debilitated, and will rely heavily on Damian Lillard to keep them afloat in the Western Conference. This is the same thing that happened last year, when Nurkic, Collins, and Rodney Hood missed significant time and the Blazers barely squeaked into the playoffs thanks to the bubble play-in tournament.

A team that once looked like a legitimate contender to finish in the top five of the West now will have to compete to stay alive. They struggled to play defense even before their rim protector (Nurkic) went down. Their 27th-ranked defense will only get worse as they play without Nurkic for an extended stretch — with their starting center on the court, their defensive rating goes down to 109.8, which would rank 17th.

Navigating their big man minutes is precarious. Enes Kanter has stepped into the starting job, and while he provides some value as a crafty offensive big, he’s easily cooked on defense. Harry Giles, despite his promise, makes mistakes on defense. They will play some minutes with Robert Covington at the five out of necessity, which has some potential, though the lack of quality perimeter defenders with size makes that difficult.

The Blazers have too many minuses — Kanter, Hood, Carmelo Anthony — to scrap together anything resembling a league-average defense. They can stick around on offense with their bucket-getters and shooters, and try to run some zone defense to survive. Derrick Jones Jr. is a zone defense extraordinaire. But finding workable combinations, particularly when Lillard sits, is difficult (per pbpstats.com, they get blown off the floor with neither star out there.)

Their upcoming schedule isn’t terribly tough, and they had a couple of games postponed this week. They will have to find a way to avoid falling too far.

Apart from teams whose games have been postponed, the two rosters most recently affected by COVID-19 contact tracing are the Dallas Mavericks and Miami Heat, two contenders with high aspirations. Both teams have missed a variety of players over the past few games.

Dallas has been helped by the return of Kristaps Porzingis, who has had full license to shoot whenever he wants. They have had to get past the absence of most of their power forwards and centers (Dorian Finney-Smith, Dwight Powell, Maxi Kleber), plus shooting guard Josh Richardson. Luka Doncic, the MVP favorite entering the season, is operating on one of the highest usage rates in the league (behind only Bradley Beal, at 34.7 percent) and putting up triple-double after triple-double. They’re getting by thanks to Doncic, who will hope his 6-for-11 performance from three a few games ago against the Chicago Bulls signals a shooting resurgence.

The Heat, most recently missing Jimmy Butler, Avery Bradley, and Tyler Herro, have stabilized at 6-7 after a rough start to the season. They most recently picked up a good win over the full-strength, and struggling, Toronto Raptors. Miami, as always, is scrounging rotation minutes from unexpected places, with Gabe Vincent, Precious Achiuwa, and Max Strus contributing in unexpectedly heavy roles. They put out plenty of shooting in every lineup, and confound teams with Erik Spoelstra’s defensive tactics. Against Toronto, they mucked up the game with a 2-3 zone that shut down the Raptors’ bench units.

Other teams have and will face heavy COVID-related absences (the poor Wizards are missing pretty much everyone except Beal due to injuries and the virus). Depth and coaching are more important than ever this season.

Who can break away from the big clumps around .500?

In both conferences, there are chunks of teams in the middle of the standings that have roughly the same record. Most teams in the NBA make up that crowded middle, apart from a small number at the top and bottom. There’s not usually this much parity, and it’s possible that the unique circumstances of this season helped create it.

The question is whether some teams will outperform or underperform preseason expectations from here. A couple of teams to watch in the middle of it: the 8-7 San Antonio Spurs, who have been impressive despite the absence of Derrick White, and the 6-8 Chicago Bulls, who have a chance to stick around as a play-in team in the East.

San Antonio feels like they’re on the verge of fully entering a new era, given the age of their four core veterans. But in the meantime, they can be competitive every night. They don’t do anything remarkably well, but they have players who can score the ball and an above-average defense. While DeMar DeRozan, LaMarcus Aldridge, Patty Mills, and Rudy Gay — the core aging vets — have varied in their effectiveness (Aldridge, in particular, has had a rough start), they each can go off on a given night.

Their start probably shouldn’t change the calculus for this team, which could see all four of those vets depart in this summer’s free agency. With no current contending window, they should try to extract value from those expiring contracts. All four players could help a contender somewhere. For now, the Spurs qualify as feisty. Keldon Johnson is a really nice player.

The Bulls are still 12th in the east, but they have seen Zach LaVine play like a legitimate All-Star — not to be disparaged as an “Eastern Conference All-Star”. He’s sixth in points-per-game, averaging 27.4 points on career-high efficiency. His assists are up to 5.3 per game from 4.2 last season. The playmaking is clearly growing.

Chicago’s future remains murky. Coby White is a pure scorer; a nice piece to have- but unclear as a long-term high-end starter. Patrick Williams has been a revelation, a rookie power forward who played himself into a starting job. It’s the potential evolution of LaVine — still just 25 — into a number-one option who drives winning that should interest the Bulls the most.

At some point, one would expect that the teams who were projected to take these playoff spots in the preseason will separate themselves. But it’s hard to predict how this stack of teams will sort itself out in the weeks to come — and whether there will be an unexpected spot for a team like the Bulls or Spurs.