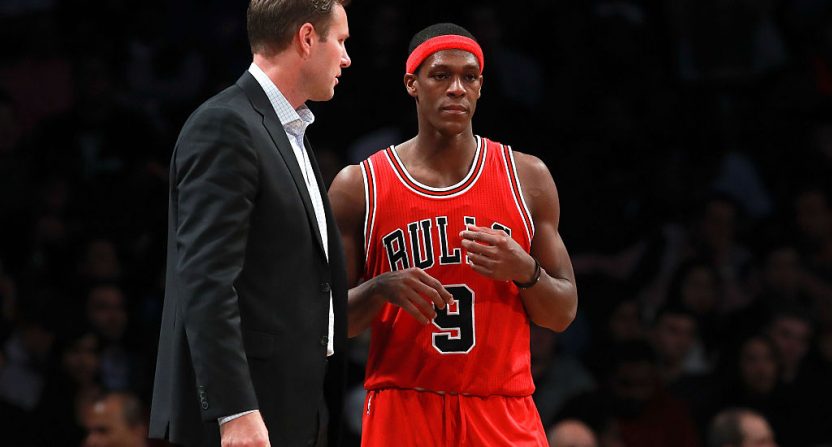 Good news regarding Rajon Rondo and the Chicago Bulls on Monday: Rondo was inserted back into the starting lineup — his first start since Nov. 30 — in place of Jerian Grant, and scored a season-high 20 points, grabbed seven rebounds, and dished out six assists in a 115-109 Bulls victory over the Charlotte Hornets.

Bad news regarding Rajon Rondo and the Chicago Bulls on Monday: The Bulls are still a train wreck, and Rondo did not exactly endorse how the Chicago’s front office and head coach Fred Hoiberg are handling things.

Gary Washburn of the Boston Globe spoke with the former longtime Celtics point guard after the Bulls played Boston on Sunday:

“My perspective on things [has changed], I would love to be part of a winning tradition or winning culture,” he said. “I thought I was going to get that here. The people up top are going in a different direction as far as experimenting. It [stinks] when you have the opportunity to make the playoffs and they want to go a different route.

“I’m looking for a straightforward coach. That’s what I’m looking forward to the most, sitting down with a coach. I want to develop a relationship and see what his goals are.”

More from Washburn  and Rondo:

The Bulls are simply a mess. The Big Three experiment has failed, and major changes will be expected this summer. Rondo knows full well the Bulls aren’t going to pick up the option for the second year of his contract, so he’ll be looking for work again.

Note: Rondo’s comments came before he was placed back into the starting lineup, so perhaps his relationship with Hoiberg isn’t quite as bad now, but it’s unlikely too much has changed on that front.

And Rondo talked to the media about his return to the starting lineup after the Bulls’ win, and didn’t sound as though he has any clarity on his role going forward (via Nick Friedell of ESPN):

“Is it a position I lost? Yes,” Rondo said after the victory. “Now I guess it’s coming back to me. I don’t know.”

Rondo said earlier in the year that he felt he was benched for “bullshit” reasons. He also went after Bulls stars Jimmy Butler and Dwyane Wade with an Instagram rant in late January.

Regardless of how Rondo feels about Hoiberg, the front office, and his teammates, there’s no doubting he’s played terribly this season, rocking a 38.7 field goal percentage that would be far and away the worst mark in the NBA if he had the minutes to qualify (and he’s always been a bad shooter, but this is easily the worst shooting percentage of his career). He’s a been a huge part of the Bulls’ problems this season, and his benching was deserved.

But, the blame with the Bulls’ issues goes all around, and it starts at the top as I wrote in January:

This is an absolute mess and it starts at the top in the front office with Jerry Reinsdorf, John Paxson, and Gar Forman. While no one could’ve seen all of this drama coming, of course, the roster was poorly built with a mix of past-their-prime veterans and raw young players that are having their opportunity to develop being blocked. It looked like a .500-ish team on paper with no direction, and that’s exactly what it’s been. And now with middle school-level drama to boot.

John Paxson (VP of basketball operations) has been a huge part of the decision-making process in the front office since 2003, and Gar Forman has held the title of general manager since 2009.

Constantly, there’s drama within the organization. The front office’s clashing with now-Timberwolves head coach Tom Thibodeau is what led to his exit in Chicago.

Constantly, the front office is making questionable roster decisions and failing to recognize what’s in the best interest of the franchise long-term. We all knew over the offseason that Rondo isn’t good anymore, and that the 35-year-old Wade — while still good — is a shell of the guy that won NBA Finals MVP in 2006. We all could see this is a middling team, and there’s no worse place to be in the NBA than in the middle. You need stars to win championships in this league, and it’s much more difficult to acquire them when you’re picking outside the top-10 picks.

And yet, nothing ever changes. As long as the Bulls are just good enough to get butts in the seats at the United Center, and just good enough to possibly play a playoff series, Reinsdorf and the gang don’t seem to care too much that the team is nowhere close to winning championships.

Really, if not for hitting on a 1.7% lottery chance to be able to draft Derrick Rose in 2009, and if not for Jimmy Butler becoming a superstar out of nowhere (credit the F.O. for drafting him 30th overall, but they sure as heck didn’t see this rise to stardom coming), this organization would look nearly as mockable as the Knicks over the last several seasons.

While Rondo definitely hasn’t been helping things for the 2016-17 Bulls, perhaps the veteran guard has at least exposed how much of a dysfunctional disaster things are in Chicago, and that (overdue) changes need to happen in the front office- where it all starts.

Hoiberg didn’t decide to fire Thibodeau and hire himself as Bulls head coach, and Rondo didn’t offer himself a two-year, $28 million contract over the offseason to become the Bulls’ point guard. Hoiberg and Rondo may be contributing to the team’s problems, but the problems extend well beyond them.