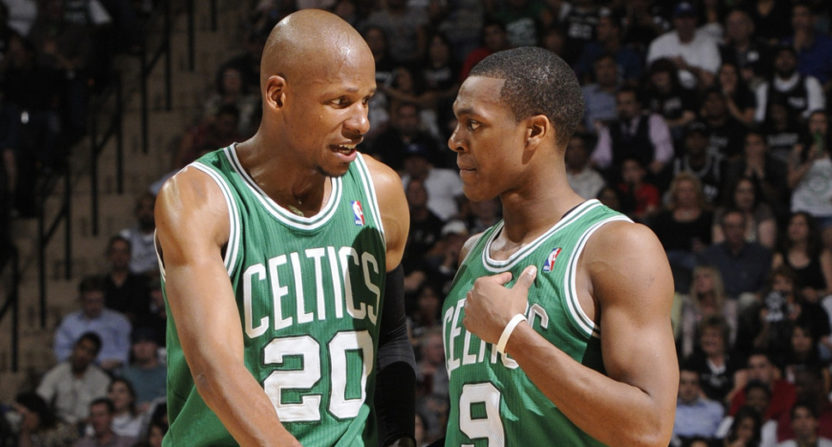 Drama continues amongst former members of the Boston Celtics. We’ve previously seen many of the guys from the 2008 title team beefing with Ray Allen, including not inviting him to their 10-year celebration, and now Allen has apparently shot back in a new book that particularly complains about Rajon Rondo.

The latest episode of As The Former Celtics Turn revolves around this new Allen book, From the Outside: My Journey through Life and the Game I Love (written with Michael Arkush). The book is set for a March 27 release, but excerpts have already come out that include Allen bashing Kevin Garnett and saying the Celtics tried to trade Rondo on multiple occasions. It also accuses Rondo of creating internal drama by claiming to have “carried” the team to the 2008 championship, and describes him throwing a water bottle to break a video screen during an emotional moment. And, as per Gary Washburn of The Boston Globe, Rondo isn’t thrilled about what Allen is saying about him:

“He just wants attention,” Rondo said. “I need actually some sales from [the book], only [publicity] it’s been getting is from my name. I need some percentage or something. His people contact my people or something. The only pub I’ve been hearing about is when he mentions my name.”

…“Obviously, that man is hurting,” Rondo said of Allen. “I don’t know if it’s financially, I don’t know if it’s mentally. He wants to stay relevant. I am who I am. I don’t try to be something I’m not. I can’t say the same for him. He’s looking for attention. I’m a better human being than that. I take accountability for my actions.”

“Certain [stuff] happens in my life, I man up. But he has a whole other agenda.”

…“He’s been retired for whatever years, and now he comes out with a book,” Rondo said of Allen. “People do that in that situation they need money. He should have hit me up and asked me for a loan or something. It’s no hard feelings.”

What exactly did Allen say? Here are some relevant passages, via Sean Deveney of The Sporting News:

Allen recalled that in 2009, because the Celtics’ front office had issues with Rondo, there was talk that Allen and Rondo would be traded to Phoenix for a package built around Amar’e Stoudemire. Allen told Rondo at the time that he should talk to team president Danny Ainge to work out their problems and keep from being traded.

It came up again during the 2010-11 season. In a team meeting, Allen writes, Rondo told his teammates, “I carried all of you to the championship in 2008.”

Allen continued: “The rest of the team, almost in unison, responded, ‘You what?’” Rondo said everyone on the team had problems with him, and when Allen told him, “None of us had issues with you,” Rondo said to him, “You did, too. You told me I was the reason we were going to be traded.”

…Allen details the famed incident during the Celtics’ playoff series against Miami in 2011, when Rivers was going over film with the team and pointing out some of the errors made during their losses in the first two games. Rondo “put his head down and turned his chair toward the lockers.” Rivers implored him to watch the film.

“F— that film,” Rondo said, according to Allen, hurling a water bottle at the screen and breaking it. Rivers ordered Rondo out. Garnett followed him and said, “Young fella, you need to get your s— together.”

So it’s understandable why Rondo’s upset, as none of that makes him look very good. But it doesn’t seem all that productive for him to go after Allen just for writing a book, or to imply that Allen needs money. And calling for a percentage here seems pretty silly, in jest or not; Allen can presumably write about his own life and his experiences without getting Rondo’s permission or paying him. And those are quite the criticisms from Rondo, especially considering that he doesn’t appear to have moved on from Celtic drama himself.

In fact, earlier this year, Rondo got into a fracas with Isaiah Thomas over the Celtics’ planned tribute to Thomas, despite Rondo being on his fourth team since his stint with the Celtics and Thomas being two teams removed from Boston. And that came after Rondo previously threw shade at Thomas through the media. Oh, and this is far from the only drama involving ex-Celtics, as we saw plenty with Paul Pierce going at Thomas earlier this year as well. There seem to still be some big divides between former members of that team, and this is just the latest illustration of that.

[The Boston Globe; photo from SLAM]