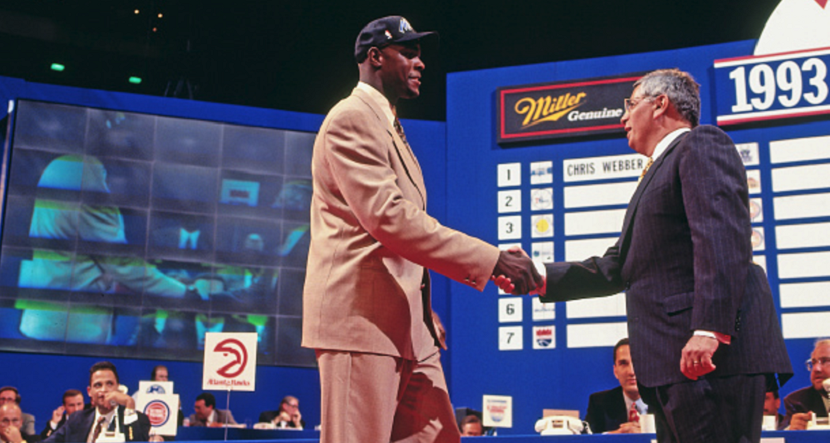 The NBA Draft Lottery has taken place in some form since 1966, but the modern version — which has turned into its own major television event — has been in place since 1990. Every non-playoff team will have a weighted number of ping pong balls assigned to them. You’ll be able to watch the odd, annual ritual unfold Tuesday at 8 p.m. ET on ESPN (or streaming on WatchESPN).

This year’s lottery provides plenty of intrigue, but more than that, we’ll tune in for potential repeats of the random and surprising results that this system has created in the past. So before the 2017 NBA Draft Lottery gets started, let’s look back on the most surprising results since 1990:

The lottery rules stop a team from falling too far past their natural spot in the draft order. Nonetheless, these three teams all attempted to test that theory. All went into their respective drafts with the best odds to win the No. 1 pick (25 percent), and each dropped all the way back to No. 4. You could argue that only 2009’s first overall selection (Blake Griffin) was worth it in those three years. But there were plenty of better players to get picked shortly after the misses in 2006 (Andrea Bargnani) and 2007 (Greg Oden). Perhaps a different team at the top would’ve made a different choice.

Going into the lottery, the Nets only had a 4.4 percent chance to get the top pick, after finishing with the seventh-worst record in the league at 31-51. Still, they ended up catapulting over six other teams for the honor to draft Kenyon Martin at No. 1 that summer. Martin was one of just a handful of quality players from that draft, so the Nets won out here. That said, probably not the best draft to be making some big moves like that.

The modern, weighted lottery featured one of the event’s most surprising results of all, even if it wasn’t at the top spot. Seattle barely missed the playoffs that year, going 41-41, and had two ping pong balls out of a total of 66. After missing out on the first pick, the Sonics’ two out of 55 shot still wasn’t great, yet they made the leap up to second. That pick would turn into Gary Payton and help spur a decade of quality basketball before the franchise relocated in the 2000s.

Solely by percentage, the Clippers’ jump from eighth to second was more impressive than Seattle’s — though not by much. Nonetheless, L.A. would continue squandering high draft picks by reaching on talent or trading assets away. In 2001, that asset was Tyson Chandler, whom they dealt to the Bulls on draft night.

The Bulls finished 33-49 in 2007-08, not too far removed from the bottom of the Eastern Conference playoff race. As a result, they were ninth in line for the top pick overall, but luck was on their side come lottery night. Chicago jumped the entire list, getting the opportunity to draft hometown star Derrick Rose. With Rose, the Bulls were resurgent for a spell — more than they would’ve been otherwise. All thanks to the 1.7 percent chance that one of their 17 ping pong balls came up before the hundreds of others.

The Clippers actually had better odds to get the top pick in 2011 (2.8 percent) than the Bulls did in 2008, but this ranking comes with the result afterward, too. Because the Clips owed Cleveland their first-rounder, the lucky first pick draw ended up heading to the Cavs that year, to help (potentially) speed up the post-LeBron James rebuild. Cleveland picked Kyrie Irving that year, then won two of the next three lotteries as well, before getting King James back.

You don’t hear much about this one because the Hornets only moved up to the third pick. But going into the 1999 lottery, Charlotte was a team that missed the playoffs by a game and had a roster capable of getting back there the following season. With just a 0.73-percent chance to move up from 13th to third, they somehow made it happen and ended up drafting Baron Davis. By percentage, this is the most impressive move up the board of all-time.

At the time, the Cavs were still reeling post-LeBron, and just needed an influx of young talent to try and eventually right the ship. Despite improving one year to the next and having a minuscule 1.7 percent shot at earning the top seed for the second straight season, Cleveland pulled it off. They’d eventually draft Andrew Wiggins, who helped facilitate the Kevin Love trade once LeBron was already back.

Charlotte made the biggest move by percentage for any spot in the draft, but Orlando is the standard-bearer for leaps in the all-time draft lottery order. The Magic won the previous season’s lottery and played .500 ball in 1992-93. They had a very slim 1.52 percent chance to move up into the No. 1 spot, with the chance to draft Chris Webber. And still, they passed 10 other teams to take the lottery in 1993. It’s the furthest any team has jumped to claim the top spot in the NBA Draft in the modern, weighted era. And the most surprising result in this version of the lottery’s 27-year history to date.