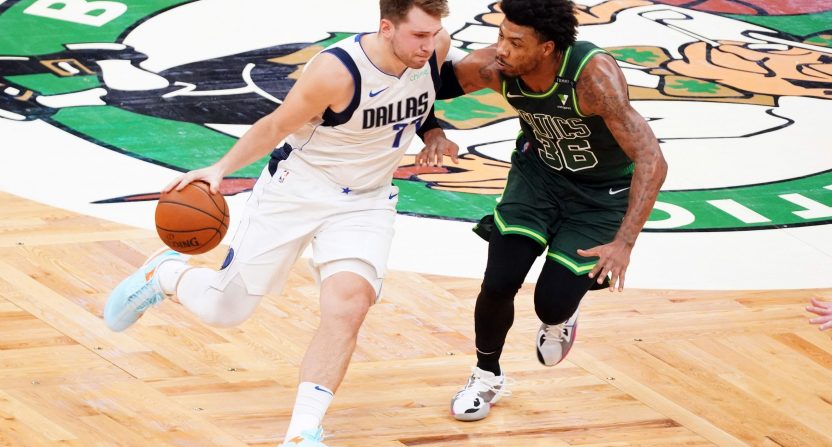 As of now, there are seven head coach openings in the NBA. Many of them carry immediate importance to the league’s circle of contenders, with such star players as Luka Doncic, Jayson Tatum, and Zion Williamson on teams in search of a new coach.

We’re going to take a look at each opening and rank them by how attractive the opening would be to a prospective coach. We’re valuing immediate and future contention, star power, and franchise stability in these rankings. We should note that the playoffs are not over and there could be at least one more job opening (looking at you, Milwaukee), but that won’t be taken into consideration here. Also, the Atlanta Hawks don’t technically have a full time coach yet, but I’m thinking interim Nate MacMillan has the job sewn up.

This is about as clean a slate as you’re going to find. Orlando mutually parted ways with Steve Clifford after the regular season, citing their differing timelines as the reason. Clifford will be looking for somewhere that has a shot at winning now.

The Magic are not that team. Their trades of Nikola Vucevic, Aaron Gordon, and Evan Fournier around the trade deadline signaled their full intent to punt on their yearly quest for the eighth-seed and dive into a rebuild. Their young core is limited and as yet undefined; much of it spent last season injured, as Jonathan Isaac went down in the bubble and Markelle Fultz tore his ACL eight games into the season.

They saw some flashes from Cole Anthony in his rookie year, as a playmaking guard whose shooting numbers will hopefully perk up (he shot 41 percent from three in May and finished at 33 percent for the year.) The overlap between Anthony and Fultz’s skillsets will be a bridge to be crossed later.

Orlando have done well to take some fliers on young players, so in addition to draft picks Mo Bamba and Chuma Okeke, they have RJ Hampton, Wendell Carter Jr., and Ignas Brazdeikis as young players who will get chances this season. And, of course, their Lottery picks this year should become members of the core.

Acquiring a star is the most important part of any rebuild and Orlando have yet to do that. Their new coach will be tasked with developing a deep cast of young players, hoping to fish out future contributors. In the meantime, Terrence Ross and Dwayne Bacon will be taking a lot of shots.

Everything in Washington revolves around Bradley Beal, who remains a widely-watched contender to leave. He has stated his desire to remain in D.C., and the Wizards don’t appear ready to trade him. But as we know in the NBA, things change quickly.

This Wizards team isn’t ready for real contention. They acquired Russell Westbrook for John Wall last offseason; either way, they’d be saddled with a ginormous contract. Westbrook has two years remaining and hasn’t played near his previous Oklahoma City levels, despite the absurd box scores.

Washington has some interesting contributors, enough to navigate the play-in tournament and grab the eighth-seed, but they lack young players with potential. Their struggles could make a Beal trade inevitable. There have already been rumors of a Westbrook deal, though it’s unclear who has the need and ability to trade for him.

The future is murky in Washington, making this a less attractive job.

This has the makings of a big offseason for the Pacers, after one year of Nate Bjorkgren went disastrously. A combination of injuries and locker room issues knocked the Pacers all the way out of the playoffs. They have a nice roster of players that should be able to make the postseason.

The overlapping skillsets of Domantas Sabonis and Myles Turner remains a source of consternation, so a trade (more likely of Turner) could be a direction they go to shake up the roster. The presence of Malcolm Brogdon, a healthy TJ Warren, and TJ McConnell makes the Pacers a playoff threat. This is an under-the-radar job, but there is a good chance to make something here.

The presence of two borderline All-NBA superstars in Williamson and Brandon Ingram means that this job carries a lot of pressure. Stan Van Gundy failed to get the Pelicans to the playoffs and it cost him the job after a year. The challenge is navigating the mismatched roster surrounding the stars and finding a way to coax a passable defense out of this team. It’s not an easy task.

We’ll see what David Griffin does with the roster this offseason. New Orleans might need a point guard, depending on what happens with Lonzo Ball’s restricted free agency, and they definitely need shooting and defense. Fast-tracking their assortment of young players (Kira Lewis Jr., Jaxson Hayes, Nickeil Alexander-Walker) will be an important job, as will be the continued development of Williamson and Ingram.

Van Gundy helped Williamson unlock his point forward traits, letting him run pick-and-rolls as a ball-handler to great success. The next step is getting him to break even on defense, and eventually become a plus.

The pressure is on to make New Orleans a playoff team immediately to keep the stars happy. The roster as currently constructed (Steven Adams?!) is not quite conducive to that, but the right coach could do wonders for this team.

Another disappointing playoff loss led Portland to finally let Terry Stotts go. The rumor mill around Damian Lillard seems to be swirling harder than ever, with a widespread recognition that Lillard wants to win and could be dissatisfied with the direction of the Blazers. They need a big move, and that likely means dealing CJ McCollum.

Many have brought up a potential McCollum for Ben Simmons swap after Simmons melted down in the second round. This trade could make sense for both teams. Simmons is still just 24 and would provide the defensive solidity that the Blazers so desperately need on the perimeter. A deal for Simmons would be a risk, given what we know about Ben Simmons, but his age and fit next to Lillard could make it more palatable for a franchise that needs a jolt.

A Simmons trade would mean that getting a stretch five to space the floor would be crucial. Moving on from Jusuf Nurkic would be understandable at this point, as Nurkic, a non-shooter, isn’t the sort of rim protector that stops the Blazers from being below average on defense. A player like Myles Turner would make a lot of sense if Portland had the assets to make it happen.

The next Portland coach will be tasked with maximizing the rest of the Lillard years, and, in a related task, convincing Lillard to stick around.

Taking the full-strength LA Clippers to seven games is, in a vacuum, a great accomplishment for the Mavericks. They were clear underdogs against a team with two top-10 players and a deep collection of shooting and defense. But the Game 7 loss, after winning the first two games, left a sour taste. The Athletic reported on various issues taking place in the front office, and not long after, longtime coach Rick Carlisle decided to leave.

The reason that the playoff loss was so disappointing was that Doncic’s magnificent performance went to waste. Despite another superhuman playoff performance from Doncic, including 45 points and 14 assists in Game 7, the Mavericks’ supporting cast came up far short. Kristaps Porzingis in particular was often invisible.

Dallas, simply put, has to put better players around Doncic. Adding a star would be ideal, but Porzingis’s trade value is likely not high enough for that, and it remains to be seen which stars are even available.

Still, Doncic is an annual MVP candidate entering his fourth season. This is an attractive job with legitimate championship prospects thanks solely to the presence of Doncic.

After transitioning to the front office, Brad Stevens made his mark quickly, trading Kemba Walker and a first-round pick to Oklahoma City for Al Horford. Horford is a veteran with some juice left, and he has familiarity with Jayson Tatum and Jaylen Brown. He provides important help at the big man position, with enough versatility to play alongside Robert Williams.

There’s a lot of work left for the Celtics, who were hampered this season by nagging injuries and their inadequate collection of young talent. They need rotation players who fit with the stars. Tatum and Brown are about as good of a duo as you’re going to find in the NBA outside of L.A. and Brooklyn. Winning should be guaranteed with those two on the team.

Anyone taking the Celtics job will obviously face significant pressure. Filling Stevens’s shoes won’t be easy, as Stevens was one of the best coaches in the league. Nonetheless, with a big market and two All-NBA-level stars, it’s a very attractive job.