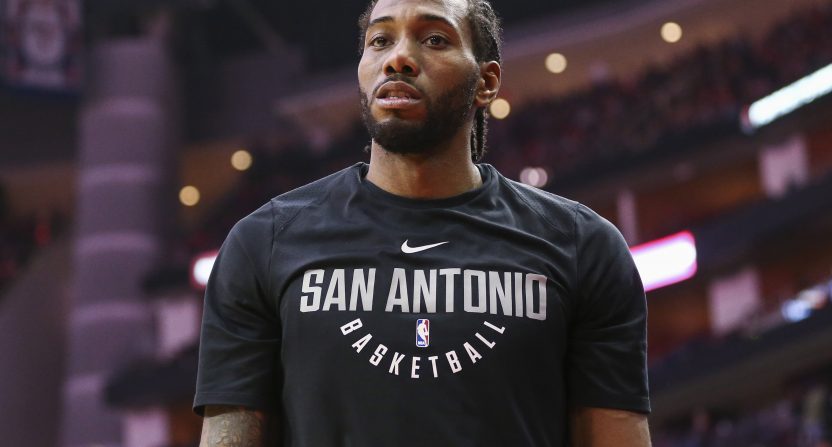 At 3:18 AM ET on Wednesday morning, Yahoo Sports’ Shams Charania reported that a big-time blockbuster NBA trade is in the works.

Charania tweeted that the San Antonio Spurs and Toronto Raptors are “engaged in serious talks on a trade centered on Kawhi Leonard and DeMar DeRozan.”

San Antonio and Toronto are engaged in serious talks on a trade centered on Kawhi Leonard and DeMar DeRozan, league sources tell Yahoo.

ESPN’s Adrian Wojnarowski then tweeted at 4:23 AM ET that a deal between Toronto and San Antonio was close.

And six minutes later tweeted that Leonard and DeRozan are aware that “a deal may be imminent.”

Both key players are aware that a deal may be imminent, league sources tell ESPN. https://t.co/r31nnsffSO

Welp, ESPN’s Chris Haynes followed that up with a tweet saying that Leonard “has no desire to play in Toronto.”

Kawhi Leonard has no desire to play in Toronto, league source tells ESPN.

And DeRozan’s Instagram activity appeared to indicate frustration with the Raptors’ organization.

DeMar DeRozan posted these to his Instagram story… pic.twitter.com/JDc0stS5jx

That would make sense given that the Raptors reportedly told him recently in Las Vegas that they wouldn’t trade him.

So this would explain those DeMar IG posts: “Sources close to DeRozan told ESPN that DeRozan met with Toronto brass in Las Vegas during summer league and was told he would not be traded.” https://t.co/Rrhf2UMDbk

So… *goodness*, there’s a lot to unpack here. And it sure seems that neither star player would be happy with the trade!

Leonard, 27, will be a free agent after the 2018-19 season, and Wojnarowski reports that the small forward “has been clear that he plans to sign with the Los Angeles Lakers in free agency next summer.”

Leonard has been clear that he plans to sign with the Los Angeles Lakers in free agency next summer, so Raptors president of basketball operations Masai Ujiri is taking a significant risk in pursuing the trade.

Assuming Leonard intends to only play in Toronto one season, is it worth it for the Raptors to go all-in to acquire him? Leonard is a superstar two-way player, and LeBron James is now out of the East. But even with Leonard, the Raptors are still behind at least the Boston Celtics and probably the Philadelphia 76ers on paper. Keep in mind they’re losing a star shooting guard in this deal, so it’s not like they’re just adding Leonard to everything else they had. They’re probably telling themselves it’s possible Leonard falls in love with playing in Toronto after a season there, but it’s quite the risk and a bad sign when it’s immediately reported he has no desire to play there.

Oh, and if the deal falls through (like, because Leonard doesn’t want to be there), it would be seem difficult for DeRozan and the Raptors to work things out at this point.

If the Raptors pull out of the Spurs talks because Kawhi made it clear he has no interest in playing for Toronto, it seems the Raps will have a tough time smoothing things over with DeMar DeRozan. Based on his IG posts, he seems HURT. Could this be a Lamar Odom/Lakers situation?

For the Spurs, being able to get DeRozan back in the trade is a pretty successful result, at least when you consider that their relationship with Leonard is seemingly broken. DeRozan, 28, averaged 23.0 points and had a 21.10 Player Efficiency Rating for Toronto in 2017-18. He’s not Kawhi Leonard, but he’s still an All-Star under team control for three more years (though at an expensive $83 million).

Expect much more news in the coming hours on this potential blockbuster trade.