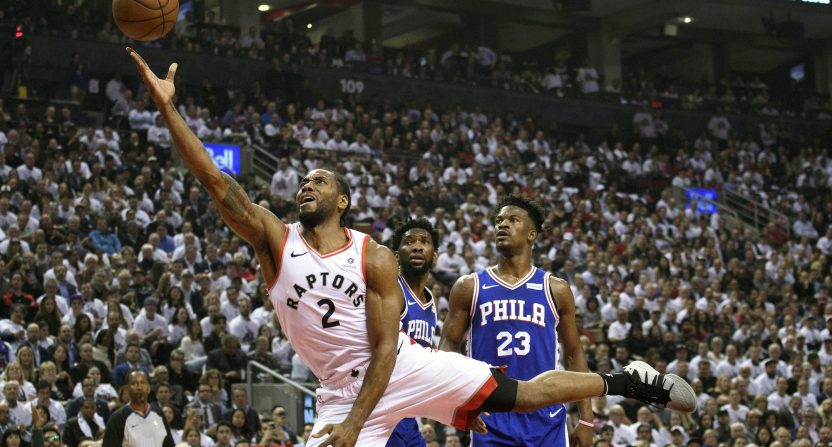 Kawhi Leonard continued to put on one of the most impressive postseason runs in NBA history, as the Toronto Raptors blew away the Philadelphia 76ers 125-89 on Tuesday night at Scotiabank Arena to take a 3-2 lead in the second-round series.

Leonard was given the strong supporting cast that had been missing around him earlier in the series. Pascal Siakam had a game-high 25 points. Danny Green dropped five of seven three-point shots. Marc Gasol hit three of five from beyond the three-point line as well, and Kyle Lowry turned in 19 points. The Raptors collectively flexed their muscle on the dreadful Sixers. It was as if the Raptors had all of the infinity stones and the Sixers had some pebbles they picked up on the coast of Lake Ontario.

The 36-point margin of victory was the largest in franchise postseason history.

For Philly, it was the worst postseason loss since losing by 40 in Game 1 of the 1982 Conference Finals vs Boston. pic.twitter.com/QbbMSbJIAj

For the Raptors, it was the largest playoff victory in franchise history, eclipsing their previous record 29-point victory in Game 2 of the first round against the Orlando Magic. For the Sixers, it was the most lopsided playoff loss in franchise history since the Sixers lost by 40 points to the Boston Celtics in Game 1 of the 1982 Eastern Conference Finals. The Raptors are really good, but they aren’t that much better than the Sixers. Are they? On Tuesday night in Game 5, they absolutely were from start to finish.

The Sixers actually played well in the first quarter, but Toronto carried a 27-26 lead at the end of the first quarter and then left the Sixers in the dust in the second quarter. A 37-17 advantage in the second quarter gave the Raptors a monster lead at halftime. After the Sixers came out with a good burst to start the third quarter with a 10-2 run, Toronto actually added to their lead going to the fourth quarter.

Game. Set. Match? That remains to be seen as the series now shifts to Philadelphia for Game 6 on Thursday night.

Raptors fans and Drake mocking Joel Embiid as he leaves the game#Sixers pic.twitter.com/Dr3Ed5G3o0

The Sixers were left with nothing but puzzled faces on the bench as the Raptors closed out their blowout victory in front of their home fans. The excuse of Joel Embiid being under the weather certainly looked legitimate as far as the big man was concerned, but that won’t ease the stomachs of fans in Philadelphia. How Embiid could go from the sluggish performance he had in Game 2 to the monster game he had in Game 3, only to play like a sick person in his last two games is a major concern. But what may be even more of a concern is the underwhelming play of Ben Simmons. When Embiid is down, the Sixers cannot afford for Simmons to be off his game as well.

Jimmy Butler remains one of the most consistent bright spots for the Sixers during this postseason, and he’s giving the Sixers good reason to consider keeping him in town. But it’s clear this Sixers team is in need of Embiid first, and Simmons second or third if this franchise is going to take their next step forward. After giving away a home game in Game 4 to see the Raptors tie the series heading back to Toronto, the lackluster performance shown in Game 5 was setting off plenty of warning signs that the Sixers may have had their hearts ripped out of their chests.

There may be free health care in Canada, but it still takes a lot to be able to put a heart back in place after it has been removed from your body and trampled over by Kawhi Leonard and company.