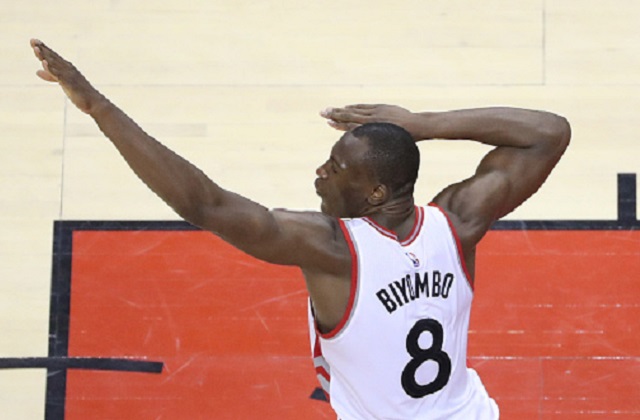 When the final buzzer sounded and the Toronto Raptors defeated the Miami Heat in the second round of the NBA Playoffs, you could feel the collective anxiety of the fanbase deflate and then erupt into euphoria. It was Game 7, after all: all the chips on the table. That’s how we like to think of these things, anyway. While Game 7 certainly marked the crescendo of the #WeTheNorth-era Raptors, the seeds of Sunday’s victory were planted earlier in the playoffs.

With the All-Star backcourt of Kyle Lowry and DeMar DeRozan struggling throughout the playoffs, the Raptors discovered and held to a soothing cliche. Paraphrased, “wait till you see us once we’re rolling.” Nearly every playoff team without a legible shot at playing into June is equipped with a couple of these self-styled axioms. They operate like Instagram self-help fodder, formulized to convince you that the circadian rhythms of your day are worth slogging through.

If things break right, you really can be the best; repeat them long enough, and they become internalized. For the Raptors, this translated into the logic that they didn’t need to fix anything. Shots would eventually drop.

Until after Game 2 when a tired, frustrated Lowry interrupted the company line — and as a result, the internal narrative. Per Bruce Arthur of the Toronto Star:

“Toronto’s stars were asked if they were going to play a normal Raptors game.

‘It’s been ugly,’ said DeMar DeRozan, who needed 24 shots to score 20 points, and who missed six of his eight free throws while playing with an injured right thumb. ‘It’s been ugly. When we do . . .

‘If we do,’ interrupted Kyle Lowry.

That DeRozan, despite reality intruding all around him, didn’t change course is a metaphor worthy of a separate novel, but onwards: The Raptors entered Game 3 like a team that stopped believing in its own bullshit. Head coach Dwane Casey inserted Patrick Patterson in the starting lineup, giving Jonas Valanciunas ample space to work in the post and Toronto’s perimeter players, for the first time in the playoffs, made his touches a priority.

We’d seen fragmented bouts of ball movement from this team, but generally in the form of it swinging from side to side. Who knows if it would have held — these are the Raptors, after all — but anatomically, this felt different. Then, midway through what could have been the game of his career, Valanciunas sprained his ankle and Lowry took matters into his own hands, scoring 29 of his 33 points in the second half. You could hear the gears of the offense shifting back into place.

But Toronto escaped with a win, along with proof of a long-standing suspicion: The more Valanciunas, the better. Whether it was through pick and rolls or post-ups, Valanciunas opened up the floor for himself and the rest of the team, freeing up shooters and commanding gravity in the lane. It’s a formula that, if Valanciunas eventually is able to play in the Eastern Conference Finals, could wreak havoc against the Cavaliers’ frontcourt of Tristan Thompson and Kevin Love, and dissuade Cavs coach Tyronn Lue from playing Channing Frye and Kevin Love together in deadly 5-out line up that immolate teams with threes.

After Game 4, when Lowry and DeRozan combined to shoot 6-for-28, the facts of Lowry’s admission stood. So did the lesson: Something needed to change. Casey, who benched DeRozan down the stretch, seemed to understand this — until Lowry fouled out. In a frenzied search for offense, he elected to re-enter DeRozan with a small lineup instead of Bismack Biyombo. This is how the Raptors’ quest for better basketball has always operated: in fits and starts. That’s also, by the way, a common trajectory for progress, which culminated in the introduction of Biyombo to a (inter)national audience.

.@BismackBiyombo0 has his fingerprints all over the first half. #NBAPlayoffs https://t.co/wVrrSNwk8G

In Valanciunas’ absence, Biyombo has emerged as the crucial big man whose defensive instincts meet his athletic ability, giving the Raptors size without giving up agility. His chief deficiency, rock-solid butterfingers, have seemingly been alleviated by the experience. After slow-roasting in the oven for years, playoff Biyombo is a brick wall against opposing guards, leading the NBA in screen assists and finishing 75 percent of his shots at the restricted area. (He tips in the other 25 percent.) That, and a magnetic knack for second chance points, allows the Raptors a versatility they would have lacked had they not been put through the ringer.

Cleveland, as has been well-documented, is tearing through the playoffs with a barrage of 3-point attempts. They’re shooting a sizzling 46.2 percent and to make matters worse, the Raptors allowed the second-highest 3-point percentage in the league during the regular season. There will be no easy remedy to this, or much else of Cleveland’s seven-layered attack, but the group which closed out the Heat in Game 7 might be the closest thing the Raptors have to an answer.

All second half, Miami attacked Toronto in waves of desperation, each one held off by Lowry, Biyombo and a rotating cast of perimeter players. The likes of DeMarre Carroll, Terrence Ross — seriously, Terrence Ross — and Cory Joseph stymied Dwyane Wade and Goran Dragic with intense ball pressure, forcing turnover after clanked jumper, and leveraging those for transition baskets.

More ammo for the ultimate war of attrition: Per John Schumann, Tristan Thompson leads the playoffs in offensive rebounding percentage. Valanciunas and Biyombo lead on the other side, ranked 1 and 2 respectively, on defensive boards. Patrick Patterson, who — while spending time guarding Joe Johnson and Dwyane Wade — snatched a whopping seven offensive rebounds in Game 7, should be well-equipped to play spot minutes on either Kevin Love or LeBron James.

The Raptors, as constructed, are not built to beat the three-headed monster in Cleveland. But they’ll have a lot more up their sleeve than they would have if the tough shots kept falling and they swam through the first two rounds. All because they finally, crucially, began to look beyond their ragged game plan. A desperate team can take one of two tacks: ingenuity or impulse. These Raptors have historically fallen back on the latter and failed. This year, they got creative. Necessity, that mother of invention, has bred versatility.

For all that, maybe the most important sign of progress for the Raptors lays in the intangible realm. Per TSN, following a loss, Toronto is 6-0 in these playoffs, defeating opponents by an average margin of 8.4 points. On the verge of collapsing in Game 7, the air thickened with anxiety in the Air Canada Centre, the tension in the arena palpable, the fanbase holding their collective breath.

But the Raptors didn’t follow cue. They found a second wind. And then a third. They clamped down hard, and then harder. They shucked their playoff demons to the side and played like a team whose performance didn’t have to be a referendum on franchise legacy, so they made franchise history. Nearly 21 years after the first regulation basketball bounced on the hardwood in the SkyDome, Toronto is going to the Eastern Conference Finals for the first time. The Raptors, in every sense of the word, have transcended themselves.