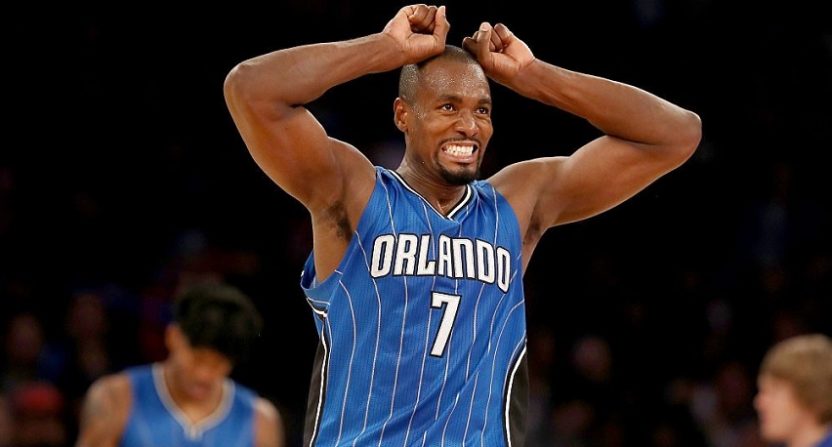 The Toronto Raptors have addressed their biggest glaring weakness, as Yahoo Sports’ Adrian Wojnarowski reports that the organization has acquired Serge Ibaka from the Orlando Magic in exchange for guard Terrence Ross and the Los Angeles Clippers’ first-round pick.

Toronto will send lower of its two first-round picks to Orlando in 2017, league sources tell @TheVertical. Toronto has the Clippers' pick.

The Raptors have fallen to the middle of the Eastern Conference playoff race in recent weeks, due to a DeMar DeRozan injury and poor play. But even fully healthy, Toronto’s chances at taking down Cleveland remained microscopic due to the club’s glaring problem at power forward. The Raptors have used rookie Pascal Siakam, Bebe Nogueira, and Patrick Patterson at the position to mixed results. Acquiring Ibaka is a massive upgrade to the starting five.

The 27-year-old is averaging 15.1 points per game, 6.8 rebounds and 1.6 blocks. While he’s not the dominant shot blocker he was with Oklahoma City in previous seasons, Ibaka’s still an excellent two-way player, capable of extending the floor. Sliding into an offense in desperate need of production at his position should give Ibaka plenty of chances to shine.

The Raptors starting five now consists of Kyle Lowry, DeRozan, DeMarre Carroll, Ibaka, and Jonas Valanciunas. That’s pretty damn impressive, and the addition of Ibaka should take pressure off Patterson and give the Raptors a complete lineup. Toronto is much more threatening to Cleveland now.

Sources: Toronto is trading for Ibaka with intention of trying to re-sign him in free agency this summer. Masai Ujiri has long coveted him.

As for the Orlando Magic, they didn’t have much choice but to deal Ibaka in another lost season. Ibaka’s a pending unrestricted free agent and the chances Orlando re-signed him were close to nil. Magic GM Rob Hennigan acquired Ibaka in a draft day deal in exchange for the huge cost of Victor Oladipo, Ersan Ilyasova (who the Thunder traded to the 76ers for Jerami Grant), and the 11th pick (Domantas Sabonis). Orlando brass clearly hoped dealing for Ibaka and Bismack Biyombo would catapult a young team with new coach Frank Vogel into contenders, but it didn’t.

The Magic’s return for Ibaka is OK. Terrence Ross is a decent enough long-range shooter with a vicious dunking habit. But the 26-year-old is painfully inconsistent, having the tendency to either take over a game or completely disappear. He hasn’t progressed like the Raptors hoped, as Ross’ scoring average failed to improve since his second season in the league. Ross is, however, controllable past this season, with two years and $21 million left on his deal.

Meanwhile, the first-round pick is an asset, but not all that valuable of one. It was originally owned by the Clippers and is expected to fall in the mid-20’s. The Raptors didn’t even have to deal their own first-rounder, which is also likely fall in a lower spot.

It’s an understandable deal for Orlando, but a no-brainer for Toronto. Acquiring Ibaka and making a run for the title while so many players like Lowry and DeRozan are in their prime is a smart move. Doing so without giving up any real assets is better. Masai Ujiri has given Toronto fans one hell of a Valentine’s Day gift.