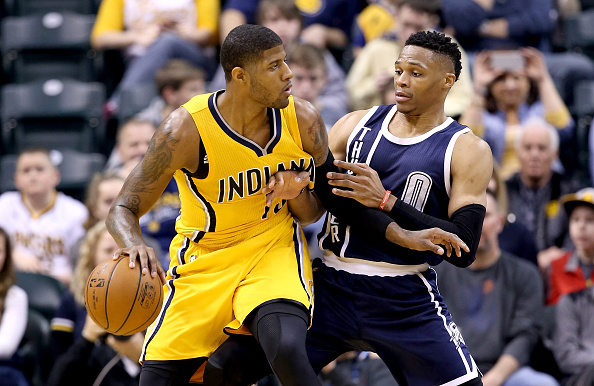 Just before the NBA’s wild free agency period began, the Oklahoma City Thunder made one of the biggest moves of the NBA offseason. OKC acquired Indiana Pacers all-star Paul George, in exchange for Victor Oladipo and Domantas Sabonis.

Despite George’s current desire to head to the Los Angeles Lakers when he becomes a free agent next summer, there’s still potential for this marriage to work out with the Thunder, too. But to what extent does the productive forward fit in with Oklahoma City? And how much will his presence alter that franchise’s trajectory vs. what it would’ve been otherwise?

For starters, it’s tough to expect incumbent Thunder star Russell Westbrook to replicate his numbers from 2016-17. Putting on an all-time performance, he averaged 31.6 points, 10.4 rebounds and 10.7 assists per game — the first player since 1962 (Oscar Robertson) to average a triple-double for a full season.

George is the opposite type of player. He’s managed to lower his usage rate for three straight seasons now, while also increasing his effectiveness on the floor. His 23.7 points per game were a career-high last year, and he hit those marks with the highest field goal percentage of his career. George’s game is less about volume. But that is something that could be complementary of Westbrook’s own game.

When Westbrook played with Kevin Durant on the Thunder, Durant was still regularly nearing usage rates of 30 percent or more. That tug-of-war for the focal point of the offense had its positive results, clearly. And Durant’s departure to Golden State proved that he wasn’t averse to sharing the basketball.

But Durant also left for a situation predicated on ball distribution and team play. The Warriors’ 30.4 assists per game in 2016-17 were tops in the NBA. Oklahoma City’s ball movement was among the worst in the league, at just 21 assists per game (ranked 25th). However, it was significantly better with both Durant and Westbrook on the team in 2015-16. That year, the team was 10th with 23 per game.

So the move to Oklahoma City could go one of two ways: Either George assumes the Durant role as a balance to Westbrook, or fades into the background of the offense as Russ continues to take over the proceedings.

If Westbrook does continue to take over, however, there are no guarantees that the Thunder actually improve with George in the fold.

Despite a career-high player efficiency rating (PER) of 30.6 last year, Westbrook’s win shares dipped from the year before, from 14.0 to 13.1. George showed himself an efficient shooter, but a slightly less efficient player year-over-year, according to PER. His own win shares also dipped to 7.1, one of the lowest totals he’s posted in his career (and two full wins below the previous season).

In dealing Oladipo and Sabonis, Oklahoma City loses about five win shares, though two players below the league average in efficiency. Still, that only nets the team two more wins on paper. If you total up the current players on the Thunder roster, win shares come out to 50 even — assuming no movement in that stat whatsoever. That’s unlikely an on individual level, especially with rookies arriving. But it also assumes there’s no decline in contributors like Raymond Felton, given his declining production for four straight seasons now.

If the Thunder get to 50 wins, which is where ESPN’s very early forecast pegs them, you also have to wonder what that three-win improvement means in terms of the entire Western Conference. Oklahoma City was a six-seed last year behind Clippers and Jazz teams that should be worse off in 2017-18. Below the Thunder, however, are a host of young Western teams that could rise in their place. Minnesota, Denver and New Orleans could all potentially improve. The Clippers and Jazz are still playoff contenders despite offseason losses. Portland and Memphis are also in the mix.

Golden State and Houston are also better teams, and San Antonio will actually be healthy again. A 50-win season might just earn you a four-seed at best, and then a date with the Warriors in round two. Is that a fate that much better than last year’s first-round loss to the Rockets?

Perhaps, but it’s not by much.

Paul George brings improvement to the Thunder, sure. But don’t be surprised if it doesn’t show much in the standings. Does that mean the trade — which could be a one-year rental — was a failure? Not necessarily, especially considering what was given up for him. Though another year of falling short in the postseason would still be a nightmare for OKC under any circumstances. George isn’t a savior, and shouldn’t be expected to be one. Now we’ll see if the Thunder are alright with that reality.