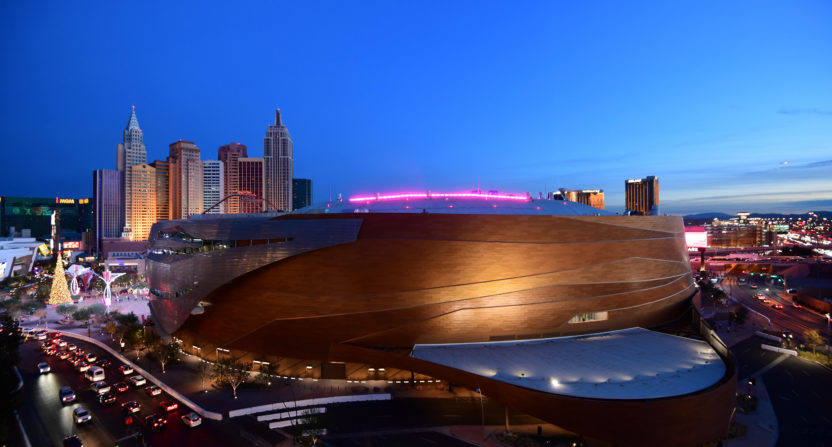 Las Vegas is known for its high-stakes gambling, the questionable decisions people make, and, most recently, for being the home of a ridiculously successful expansion NHL team, the Vegas Golden Knights. With the Oakland Raiders moving to the Sin City in the near future, Vegas will have gone from having no Big Four pro teams to having two within the span of a couple of years.

To land an expansion or relocated baseball team, the city would need to invest in a new MLB caliber stadium, which is unlikely. To bring either a relocated or expansion NBA team to Vegas, all the city needs to do is show off its brand new T-Mobile Arena, the home of the Golden Knights. The arena could easily host both teams, just like the shared venues in Philadelphia, Los Angeles, Chicago, Toronto, Boston, New York, Washington D.C., Brooklyn, Dallas, and Denver, and was created with that specific purpose in mind.

T-Mobile Arena was opened in 2016 and has the capacity for 17,500 hockey fans, and can expand to 18,000 for basketball. T-Mobile Arena is also in a prime spot, located right off the Strip and sitting directly behind the New York New York and Monte Carlo Hotel and Casinos.

Despite the arena’s terrific location and its relative newness, Madison Square Garden and Las Vegas Sands have decided to team up and build a another new arena less than two miles away. The venue, which has no team attached to it and is just a bit redundant, would also be right off the Strip and also located behind two pristine hotel and casinos.

According to the Las Vegas Sun, the proposed Las Vegas Sands-Madison Square Garden arena will be seated behind the Venetian and Palazzo, which are both owned by Sands Corp. The new arena is “on track to begin construction this summer.”

This is so ridiculous.

“You’re going to see something that’s pretty spectacular and I know our neighbors across the street, the Wynn, got to see it and it looks extraordinary,” Robert Goldstein, president and chief operating officer of Las Vegas Sands.

It will be around 600,000 square feet and have a capacity of 18,500. The unnamed venue is currently scheduled to open up during the summer of 2020, which is the offseason immediately after the third season of the Vegas Golden Knights.

“It’s a great place to live and work. The growth is returning around Las Vegas — it’s more of a lodging-based market than it’s been in the past,” Goldstein told to the Las Vegas Sun. “The Golden Knights have done extraordinarily well and the hockey has been terrific, football is coming, why not.”

Why not? WHY NOT? Let’s see: there is another brand new arena less than two miles away, the chances of the NHL adding a second Las Vegas team two miles away is less than zero, the chance of the NBA adding a team and that team playing at the new spot is pretty much non-existent, the city of Vegas doesn’t need a second arena and third stadium (even without an anchor tenant), and finally, THERE IS A NEARLY IDENTICAL ARENA LESS THAN TWO MILES AWAY.

There is really no good reason for Sands and MSG to invest the time and money necessary into this venue. By the time this new place opens, concert companies will already have an established relationship with T-Mobile Arena. On top of that, both the UFC and Golden Knights already have exclusive deals with T-Mobile Arena that would make it incredibly hard for them to jump ship and move to this new arena.

In short, what on earth is this new arena going to attract? It’s not like if Taylor Swift is doing a concert at T-Mobile Arena, Justin Bieber’s reps would let him do a concert at the same time less than two miles away. It would just be stupid to try and compete on the same night for the same fans.

Congratulations, Las Vegas! You’re getting another arena for no reason! Hopefully, you don’t have to pay for this one!

9 thoughts on “For some reason, Las Vegas is getting another sports arena”