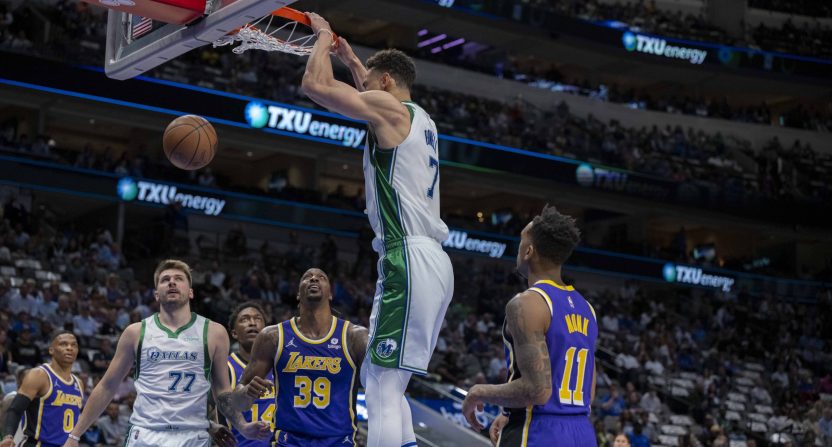 The Los Angeles Lakers have had many great nights in the history of their franchise. Tuesday night will not be counted among them.

Just how bad was it? The 82 points surrendered in the first half made for the second-worst total in the franchise’s history and the worst since moving to the West Coast.

It is also the most points allowed in a 1st half by the Lakers since the franchise moved to LA. pic.twitter.com/reWdYOCUOg

That’s a rough day at the office. In case the Lakers needed reminding of that, several fans on Twitter were all too happy to remind them.

Lakers are done for https://t.co/w6Szt61Nzu

Shaq on the Lakers: "They don't want it. They're done." via TNT.

Lakers haven’t allowed that many first half points (82 pts) since 1959 pic.twitter.com/8tLLzVywto

It didn’t get any better after halftime. The Mavericks continued to pile on with Luka Dončić securing a triple-double less than halfway through the third quarter.

Luka has a triple-double halfway through the third quarter 😱 pic.twitter.com/8DfP3p32mm

Luka whenever he sees the Lakers pic.twitter.com/yHKcR4iKCn

But it wasn’t a one-man show. In fact, by the time the third quarter was over, the Mavericks led 113-84 and had seven different players in double-digit scoring with two others at five points.

In the complete interest of fairness, it must be said that Los Angeles was without LeBron James and Anthony Davis on Tuesday.

But entering Tuesday’s game, Los Angeles had a 0.5 game lead over the San Antonio Spurs for the final play-in game spot. You’d think that the players who took for the Lakers would battle a little bit harder. That has clearly not been the case.

No, there's no LeBron, no AD. But do the rest of the Lakers have no pride??? They just gave up 82 in the first half at Dallas – 2nd most points allowed in a first half IN LAKERS HISTORY. Fakers!

It’s not often that Skip Bayless makes an unassailable point. But he was not alone.

It’s almost like outside of LeBron and AD, this Lakers roster is garbage so I’m trying to understand the delusion of “we can make a run if Bron or AD are healthy” like the dudes surrounding them aren’t the actual worst

The Lakers will have to do some soul-searching at the end of the season. Tuesday was a bad game in a season full of them.