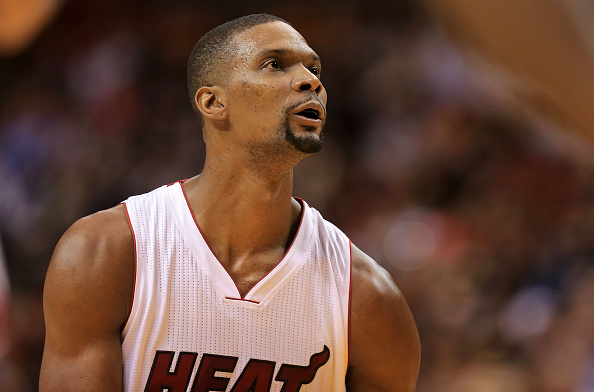 Barry Jackson of the Miami Herald reported on Monday night that the Miami Heat are concerned about a “potentially serious health situation” with forward Chris Bosh. Bosh missed Sunday’s NBA All-Star Game with what was called a “strained calf”, but Jackson reports that the Heat are worried the issue is more than that, and potentially a blood clot in Bosh’s calf:

Heat with serious concerns tonight about Bosh’s health;agent says “too soon to report” if he has another blood clot: https://t.co/zrchUdx7rd

The Heat was concerned on Monday about another potentially serious health situation involving Chris Bosh, multiple sources said. Bosh missed Sunday’s All-Star game with a strained calf and returned to Miami for additional tests. A person in touch with the Heat’s front office said a worrisome problem surfaced Monday, beyond merely a strained calf. Another source said his life was not at risk. Asked directly if Bosh had been diagnosed with a blood clot in his calf, agent Henry Thomas responded by text: “Too soon for all of that…. Too soon to report that.” But a source said the concern is that he might have a blood clot in his calf.

The Associated Press’ Tim Reynolds has since followed up on this report, as he’s heard from a source that Bosh is indeed facing a “blood-clot scare”

It is a blood-clot scare for Chris Bosh, source tells AP. Source also insists that Bosh’s season has not been declared over. — Tim Reynolds (@ByTimReynolds) February 16, 2016

Bosh will spend “the next few days” reviewing options and no determination will be made about his playing status until he goes through more tests and evaluation, a person with knowledge of the situation told The Associated Press on Monday night. The person spoke on condition of anonymity because neither the All-Star forward nor the Heat have revealed the matter publicly.

This is terrible news if true, as you may recall that Bosh just dealt with blood clots in his lungs last season that forced him to miss 31 games, and forced him to be on blood thinners for seven months:

If Bosh, 31, is diagnosed with a blood clot in his calf, he would need to take blood thinners that would preclude him from having physical contact and would thus sideline him indefinitely. Last year, Bosh was on blood thinners for seven months.

He said at the time that if the clots returned, he would not be required to take blood thinners for the rest of his life.

Bosh, 31, is averaging 19.1 points and 7.4 rebounds on the season. The stellar performance earned Bosh his 11th All-Star selection. Hopefully the health issue is not as serious as feared, and Bosh can return to his great season on the basketball court soon.