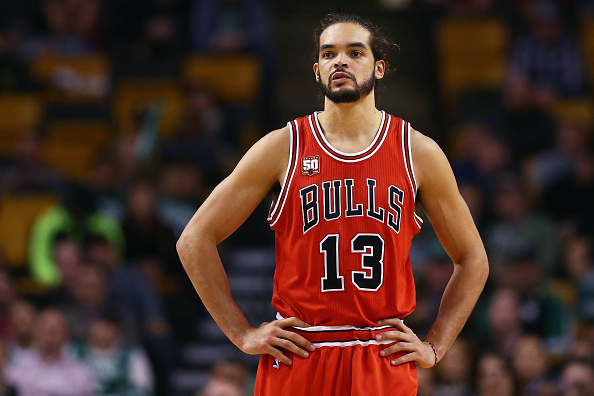 Tim Bontemps of The Washington Post reports that free-agent center Joakim Noah is expected to sign with New York Knicks on a deal worth around $18 million annually. The move would reunite Noah with his longtime Chicago Bulls teammate, Derrick Rose, whom the Knicks of course acquired via trade last week:

By all accounts, Joakim Noah is about to reunite with Derrick Rose and return to his hometown.

Multiple sources have told The Washington Post that Noah will almost certainly be joining the New York Knicks after free agency begins, with a starting salary somewhere in the $18 million per year range.

Other reporters have been hearing the same as Bontemps:

Have heard the same lament from multiple interested teams tonight: They see New York as a big favorite to land Joakim Noah in free agency.

The news isn’t surprising, as the Knicks have been considered the likely landing spot for Noah after the Rose trade, which also sent center Robin Lopez to the Bulls. Noah would be the starting center for the Knicks, joining Kristaps Porzingis, Carmelo Anthony, and Rose in the lineup.

However, it’s a lot of money to invest in a 31-year-old player that battled injuries the past two seasons, and his play looked nothing like the guy that finished fourth in MVP voting in 2013-2014. In 2015-16 for the Bulls, Noah played just 29 games, while starting only two of them. He averaged 4.3 points per game on 38.3% shooting from the field (both career worsts), but was still effective on the boards with 8.8 rebounds per game. He went down for the season with a shoulder injury that required surgery in January, but is said to be 100% healthy now.

Noah would give the Knicks yet another big name, but like Rose, it’s anyone’s guess how valuable his contributions will actually be on the court in 2016-2017. But there is no doubt the Knicks would be getting one of the most passionate players in the league, and he will give that team a needed veteran leader. There is also no doubt the Knicks are going to be one of the most intriguing teams entering the season, and it will be interesting to see if they make any additional splashes in free agency.