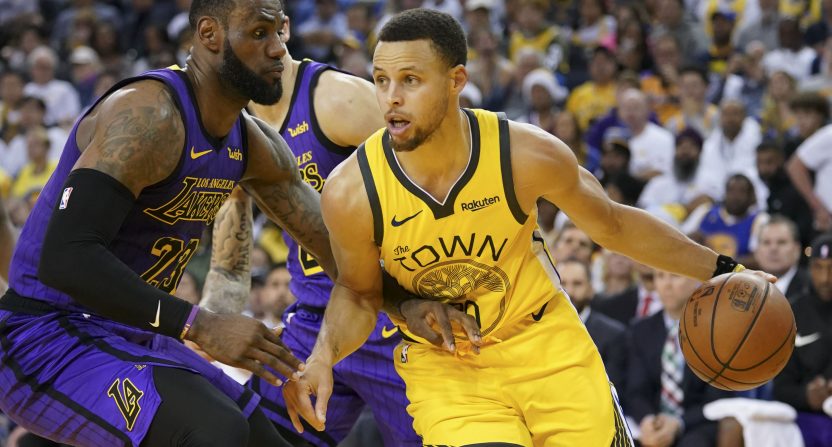 You’d think we know better. That we’ve all seen enough horror movies to know that the first shot doesn’t kill the monster. That you always double-check to make sure it’s dead. That you never turn your back until you’re 100 percent sure their reign of terror is over. Then, and only then, do you celebrate (and even then, maybe shoot the monster once more for good measure).

The only thing we love more than watching a dynasty ascend is reveling in its demise. Just look at how many times over the years that people have tried to claim the Alabama football dynasty to be dead following a bad loss. Plenty of people are hoping and praying that the New England Patriots will stumble in the AFC Playoffs this year, ushering in the end of the Belichick and Brady Era. And the Golden State Warriors, winners of three of the last four NBA Titles, have certainly crossed over in that territory as well.

Between Kevin Durant’s whining and ego, Draymond Green’s big mouth (and big torso), Steph Curry’s ubiquity, and Warriors’ fans in general, Golden State is officially The Big Bad and everyone is waiting for a would-be upstart to knock them off their perch.

All of that pent-up desire to see the Warriors stumble came out on Christmas when the LA Lakers ran them off their own court all night long, culminating in a 127-101 drubbing. Not only did the loss prolong the Steph Curry Christmas Curse (Curry failed to score 20 points once more on the big day), but it was even more jarring considering LeBron James left the game in the third quarter with a groin strain. The All-Stars on Golden State’s side weren’t able to come back against a LeBron-less Lakers and that had a lot of people wondering what in the world is happening out in Oakland.

It also has a lot of people predicting that the end is nigh for the Warriors dynasty. To which we say…pump the brakes. It’s still December. It’s very early in the regular season. The Warriors are currently on pace to finish somewhere around 55 or 56 wins, which would certainly be a big step back from the previous two seasons. However, this is also a team that has learned it doesn’t need to gel in the first half of the regular season in order to come together when it matters most.

In other words, yes, the signs are there that the Warriors are looking at their last gasp in their current form. And they certainly look more vulnerable now than they have in years. But until they’re dead in the ground and you know for sure that the monster is gone, you’d be pretty dumb to start writing them off altogether. Whatever their record and whatever happened on Christmas, they’re still the most talented team in the NBA and they’ve got more experience when it matters than anyone. It might not be very pretty but they’re still the odds-on favorite to emerge from the Western Conference until they actually don’t.

A Christmas Day loss doesn’t look good for Golden State, but it might also be just the kick in the pants they need to turn it on again.

So go ahead and explain why you’re sure the Warriors are done and the team should consider trading Steph Curry and starting over at your own peril. It’s certainly possible that Golden State slips up this season, but the odds are still in their favor. Have at your Hot Takes, just be prepared to eat them when it comes down to it.