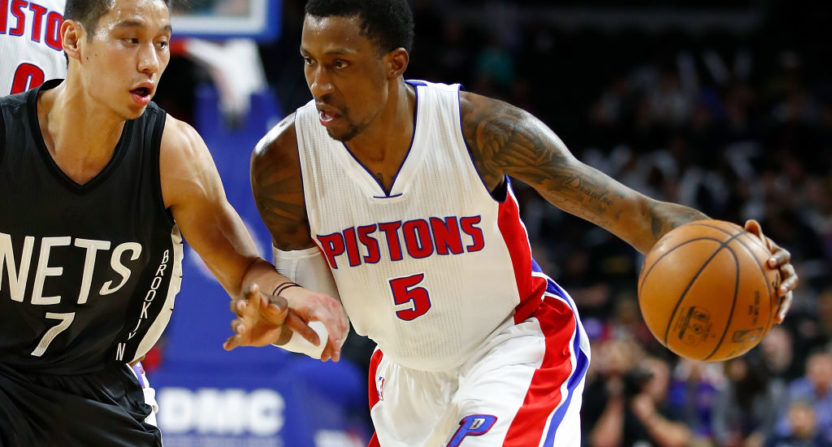 As the NBA salary cap has leveled off this summer following the wild free agency frenzy of a summer ago— when absurd contracts were being given out left and right— this summer marks a hangover of sorts after last year’s proverbial drunken escapade.

There’s a lot less money to go around this offseason in the NBA, and the group of players feeling that the most is unquestionably the class of restricted free agents.

The league’s new television contract with ESPN and Turner took the cap from $70 million in 2015-16 to $94.1 million in 2016-2017. Rejecting the league’s proposal for cap smoothing, which would have artificially increased the cap gradually over time, the amount teams could spend spiked drastically. As a result, free agents cashed out and gorged on gigantic deals never before seen in the NBA.

The Brooklyn Nets go in their own category for trying to sign away restricted free agents last summer. Portland matched Brooklyn’s four-year, $75 million offer sheet for Allen Crabbe — the Blazers may regret that one as well — and the Nets signed Tyler Johnson to a four-year, $50 million offer sheet, only to have that matched by Miami.

Now let’s get to summer 2016 restricted free agents who left their respective franchises. After Kevin Durant signed with Golden State, restricted free agent Harrison Barnes got five years and $95 million from Dallas. Milwaukee signed Matthew Dellavedova for three years and $38 million and Miles Plumlee for four years and $52 million. The Plumlee contract was so unfriendly that he’s been traded twice since he signed that deal with the Bucks; to Charlotte in February, and then from Charlotte to Atlanta along with Marco Belinelli for Dwight Howard, another summer of 2016 contract that aged poorly.

The reason why restricted free agents haven’t enjoyed the kind of financial windfall last year’s free agent class did is twofold. One, the salary cap only rose from $94.1 million to just over $99 million this year, requiring teams to be more frugal and spendthrift with less cap space. Less money to go around means less of an opportunity to pay players in excess. Secondly, owners who were burned by the ridiculous contracts they gave out the year before were generally more cautious about throwing around big money this summer, and the smart teams were far more judicious in how they spent.

After five RFAs got contracts of at least $75 million last year, just one, Otto Porter, has gotten that lucrative of a deal this year. Washington gladly matched Brooklyn’s four-year, $106 million offer for the dynamic small forward. Tim Hardaway Jr. was the second highest-paid RFA this year, and his four-year, $71 million offer sheet from the Knicks was immediately criticized by the NBA Twitterverse and blogosphere. Atlanta did not match and New York got a player back for whom they traded Jerian Grant to the Hawks just two years ago.

Would Joe Ingles have gotten more than the four years and $52 million that he got this year from Utah had he been a restricted free agent last summer? Probably. Kelly Olynyk was the hero of Game 7 of Boston’s second-round playoff series win over Washington, but four years and $50 million seems pretty fair for him, as does the four years and $46 million Tony Snell got from Milwaukee.

Otherwise? It’s been a big disappointment for restricted free agents this summer. Jonathon Simmons was severely underpaid by Orlando, who got the improving former San Antonio wing for three years and $20 million. For being an elite perimeter defender, Andre Roberson should’ve garnered more than three years and $30 million, which he took to re-sign with Oklahoma City. Last year, Bojan Bogdanovic would’ve gotten more than the two years and $21 million he received from Indiana.

Pistons shooting guard Kentavious Caldwell-Pope likely saw the big money teams were doling out last year and assumed he’d get a big deal this offseason. He reportedly rejected a five-year, $80 million offer from Detroit, thinking that he could get the same max contract Porter received. Had he been an unrestricted free agent, he likely would’ve gotten a pretty large contract, as Tom Ziller expertly points out. But because he was restricted, Detroit could match any offer and teams weren’t willing to tie up its cap space with an offer sheet for Caldwell-Pope. Therefore, the number of teams with enough room to give KCP what he wanted when the Pistons renounced his rights were very few.

With no team willing to give Caldwell-Pope what he wanted, he took a one-year, $18 million deal with the Lakers to try to increase his value for next year. That option was only afforded to KCP because the Pistons renounced his rights after acquiring Avery Bradley from Boston, making him unrestricted.

For the several talented restricted free agents still out there — like Nerlens Noel, JaMychael Green, Mason Plumlee, Nikola Mirotic and Alex Len — their teams still have the right to match any offer sheet they’d sign with another team. And with few teams having the cap room to sign one of these players to the lucrative deal they believe they deserve, their options are limited. Accepting a qualifying offer and becoming an unrestricted free agent is less than ideal, and becomes less so given that the salary cap for the 2018-19 season is expected to remain mainly flat compared to this year.

With less money to go around, this year’s class of restricted free agents are likely disappointed after seeing how much their counterparts got a year ago. And because of a smaller jump in the salary cap and the expected leveling out of the cap during the next few years, expect restricted free agents to be offseason losers for years to come.